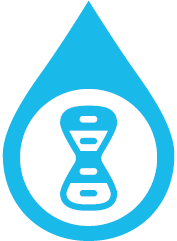 Groundwater levels are influenced by a variety of factors, such as precipitation, evaporation, groundwater abstraction and the water level of streams, canals and rivers. HydroMonitor is the multifaceted computer program that hydrologists can use to quickly and easily unravel the different external influences on groundwater. It provides a clear picture of the impact of a hydrological measure, and makes the evolution of the groundwater level predictable.

With HydroMonitor every hydrologist and ecologist can analyse time series, without having to dedicate the time and mathematical expertise required by other programs. This is because basic information about the hydrological behaviour of groundwater systems is embedded in the program. HydroMonitor supports the user with clear visualisations at every stage of the processing.

A multifaceted tool for the hydrologist

With HydroMonitor it is possible, in a few clicks, to create a hydrological area representation which can provide the basis for further analysis. The program can import data from national data sources, such as the KNMI, the Key Register of the Subsurface (BRO), REGIS and DINO. It can also be linked to frequently used software packages for network monitoring management, as well as to data bases like DAWACO, Delft-FEWS and TeleControlNet. Lastly, the program can also import datalogger measurements (e.g., Keller, Solinst, Diver, InSitu).

With the complete picture provided by these data sources, HydroMonitor can:

Because HydroMonitor combines knowledge about the hydrological system with data-driven models, it can efficiently model time series with explanatory variables, such as (surplus) precipitation, evaporation, groundwater abstraction and surface water levels. It can also take into account (step) trends. HydroMonitor offers the possibility of conducting time series analysis according to the Box-Jenkins method, and carries out the necessary interpolation to a fixed measurement interval or automatic resampling. The time series models are stored and can be easily modified or tested, for example, with regard to their response functions, calibration statistics or statistical properties.

Menyanthes in a new jacket

HydroMonitor is the successor to Menyanthes, the popular time series analysis program. Menyanthes, which was originally developed in collaboration with Delft University of Technology, WENR (formerly Alterra) and Artesia, has been used by more than 150 organisations, both in the Netherlands and internationally: Water Authorities, provinces, municipalities, water utilities and land managers. KWR itself also makes use of it in its own research.

HydroMonitor builds on Menyanthes, but it has been designed from the ground up for use with new data sources like BRO, for international application, for integration with hydrochemical analyses, and for extensive linkage with frequently used software packages for network monitoring management. HydroMonitor is currently still under full development and is not yet available. The program’s first release is planned for the first quarter of 2020; at that time, existing Menyanthes users with a service agreement will be able to update to HydroMonitor at no cost.

A new milestone of beta version