The supply of fresh groundwater is limited in coastal areas all over the world, while the demand for freshwater in these areas is actually increasing because of population growth and economic development. One of the effects of excessive pressure on the groundwater system is the salinisation of aquifers caused by the intrusion of brackish and saline groundwater.

The objective of this TKI project is the (further) development and scaling-up of smart concepts, such as Freshkeeper, to manage fresh and brackish water in delta areas. With innovations in well design, in-well and subsurface measurement, and active control of the subsurface fresh/saline border zone, the next step is taken towards full-scale application of the Freshkeeper concept at the Noardburgum (Vitens) wellfield. The project includes: (1) the design and construction of a combined abstraction/ injection well for fresh and brackish groundwater; (2) the design and construction of an automatic sensoring/measurement and control system for this Freshkeeper well; and (3) the use of a well and control system for the optimal, active control of the subsurface fresh/saline border zone. Moreover an in-depth exploration is made of the impact of a full-scale implementation of Freshkeeper on the water system in Friesland, with a focus on the neighbouring water abstraction areas.

In 2014, the design of the combined abstraction/injection well, as well as the sensoring and control system, were delivered; and the license was granted for the abstraction and injection of brackish groundwater. The ‘smart well’ was installed in the autumn of 2014 and has been operational since January 2015. The well contains two abstraction screens placed at the depths of 60 meters (fresh groundwater) and 140 meters (brackish groundwater). The brackish water is pumped up simultaneously with the freshwater, but then reinjected at a depth of 170 meters under an confined clay layer.

The well was tested extensively in 2015. This involved not only the technical operation of the well itself, but also the reaction of the groundwater system to different abstraction regimes of fresh and brackish groundwater. The resulting information is being used to develop a good density-dependent groundwater model, and to derive decision-making rules to enable the fully-automated control of the well. This knowledge should be the prelude for a full-scale implementation of the Freshkeeper concept and the reopening of the northern Noardburgum wellfield, which was shut down in 1993. 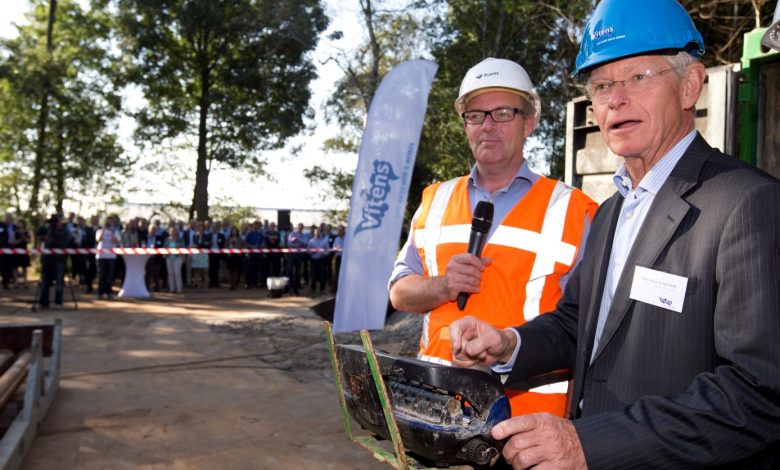 Hans Huis in ’t Veld, standard bearer of the Water Top Sector, at the start of drilling for the installation of the TKI Freshkeeper well, 3 October 2014.