Aquifer storage and recovery (ASR) involves using wells for the subsurface storage and recovery of excess freshwater to satisfy later periods of demand. ASR-coastal is a special form of ASR in which several well screens are installed above each other in a single borehole, and can be independently operated. This enables the optimisation of the recovery of freshwater during ASR in aquifers with brackish groundwater. The buoyancy movement of the freshwater into the brackish groundwater can be overcome through deep infiltration and shallow recovery.

Little was known about the local soil structure and groundwater quality in the study area. Yet these soil conditions are of crucial importance for the successful storage and recovery of high-quality irrigation water. The challenge was to obtain sufficient information for an initial, small-scale ASR system, and then use it to closely study a test cycle of infiltration, storage and recovery, and to produce a model that reliably simulates the storage and recovery. On the basis of this information, a full-scale, operationally reliable ASR system was then to be realised.

The extracted material from the test drilling showed that an appropriate aquifer is located at a depth of about 10 to 30 m NAP (Normal Amsterdam Water Level). The aquifer consists of medium-fine to medium-coarse sand, and is sufficiently confined between clay/peat layers. The groundwater at the test drilling site is lightly brackish. Nevertheless, modelling with SEAWAT showed that the application of ASR-coastal would allow for the successful annual abstraction of the targeted volume of freshwater.

On the basis of the modelling results, the concept design for the ASR system was developed (total of eight ASR wells) and its hydrological impact on the surroundings calculated. The first ASR-coastal was then installed with four separate well screens, and high-quality irrigation water was stored and then recovered over a six-month test cycle. In the test cycle the movement of the groundwater and changes in the water quality during its residence in the subsurface were monitored. The test cycle and a complete wellfield were then simulated in a model. This showed that in the long term practically the entire annual volume of stored water will be recoverable.

The results of this TKI project provided the basis for the design of the full-scale ASR system in Nieuw Prinsenland. TOM has decided to carry out all of its storage using this system. In the spring of 2017, three ASR wells were added to achieve a capacity of 100 m3/hour. 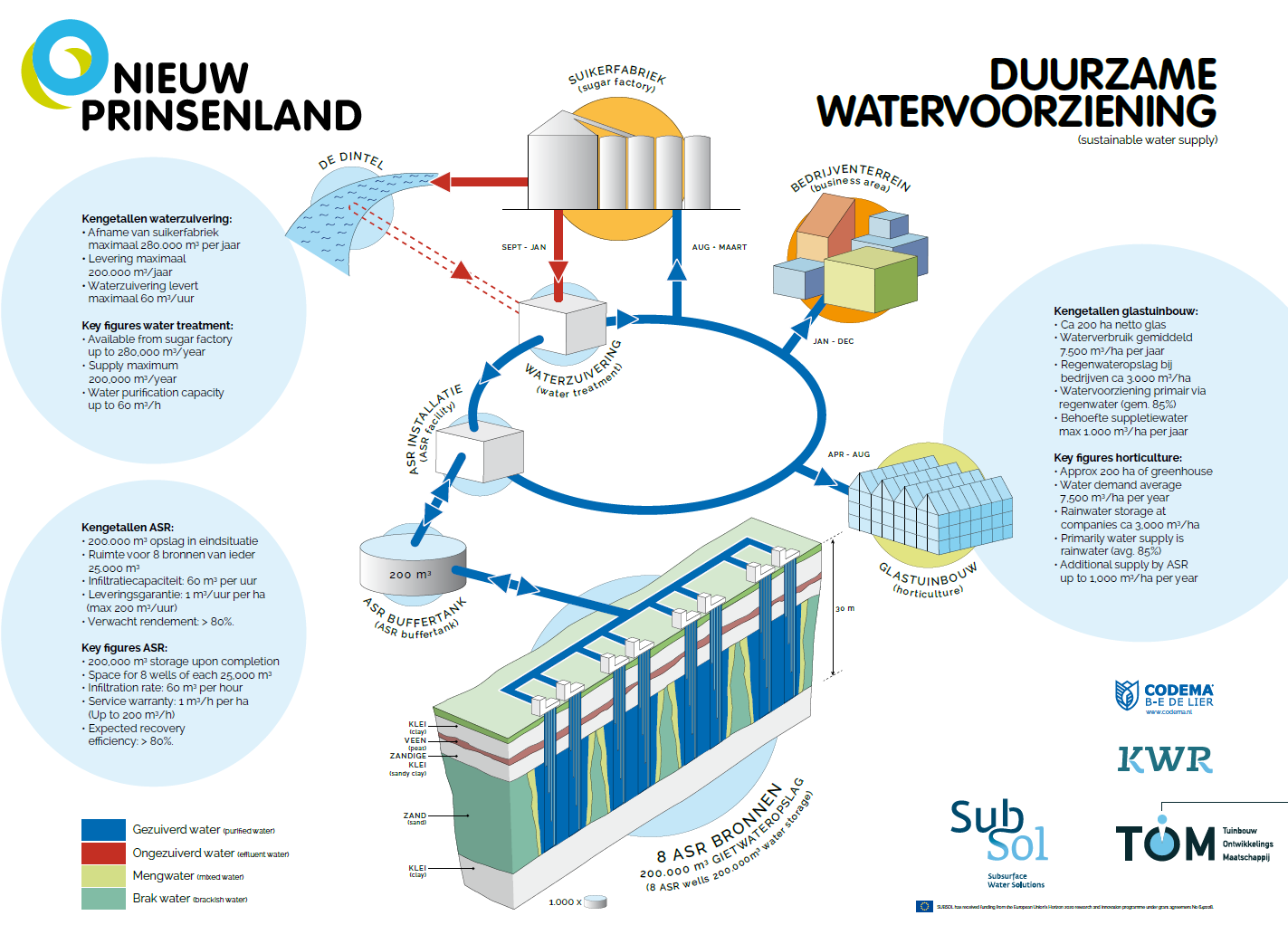 Overview of the system of the water supply of Nieuw Prinsenland 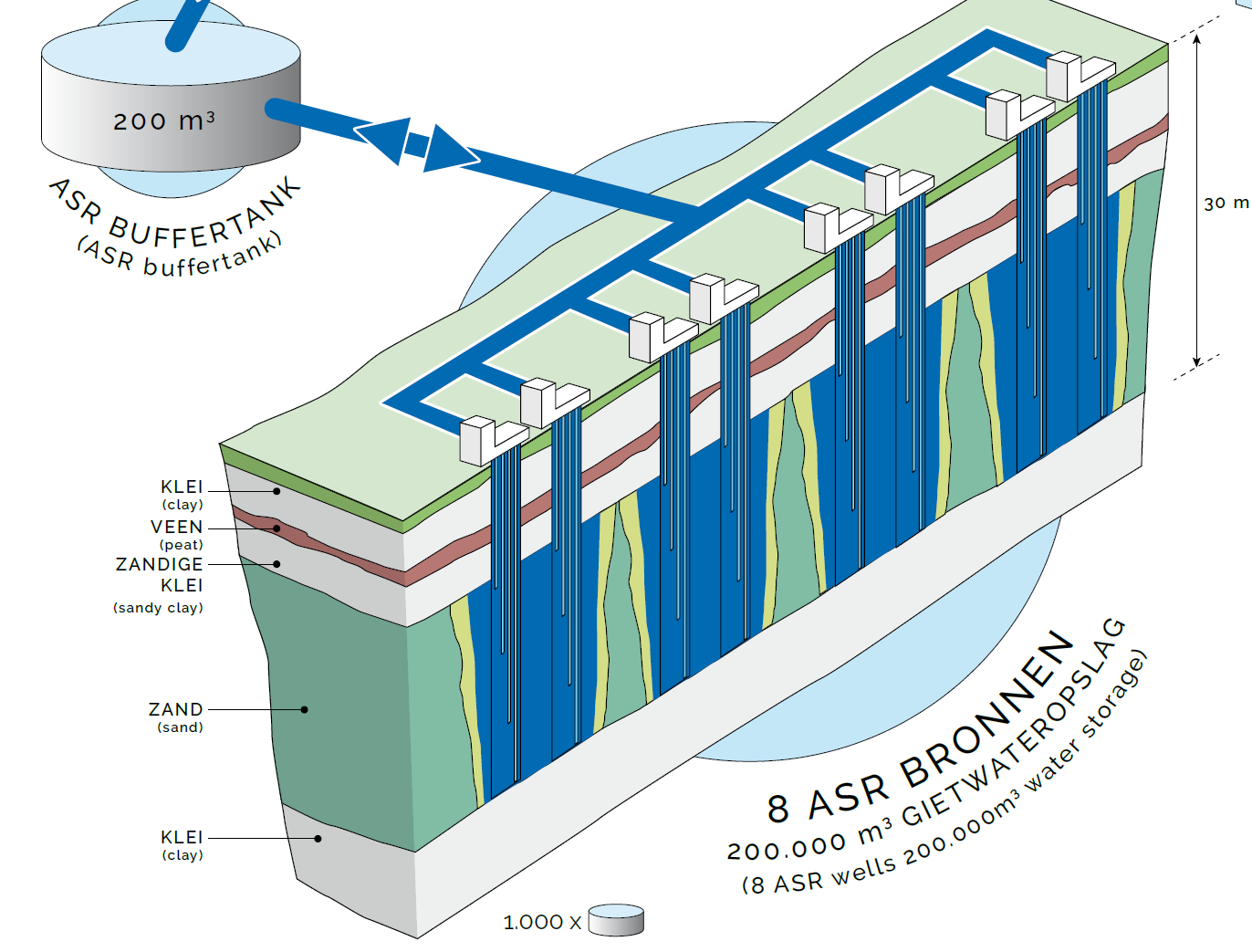 Zoom-in of the ASR wellfield 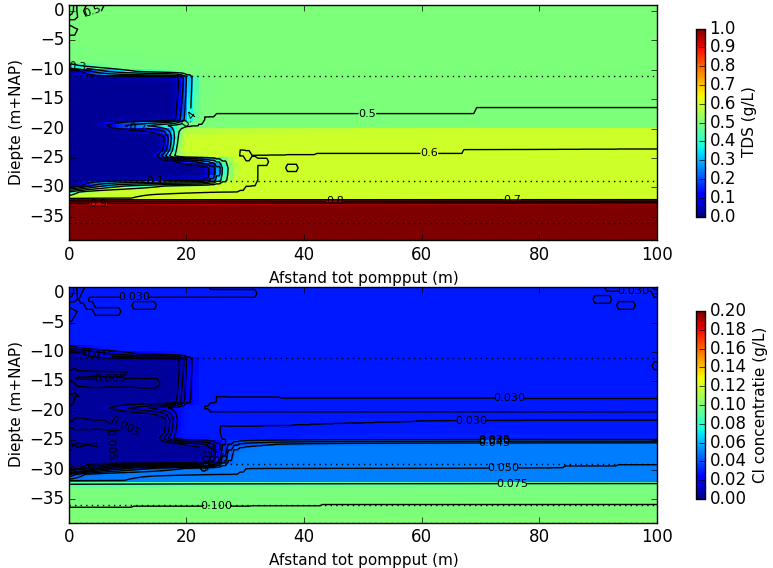 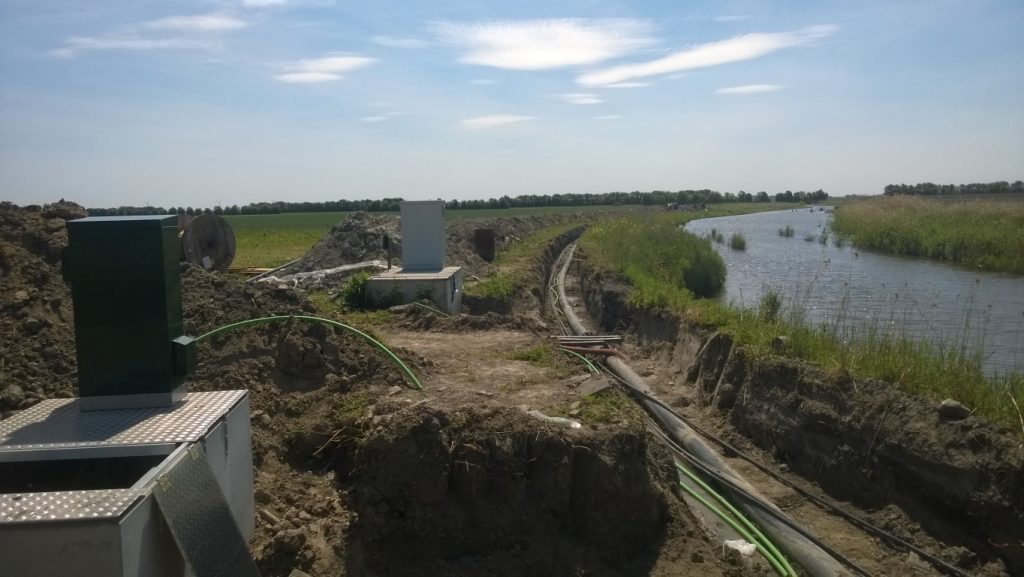 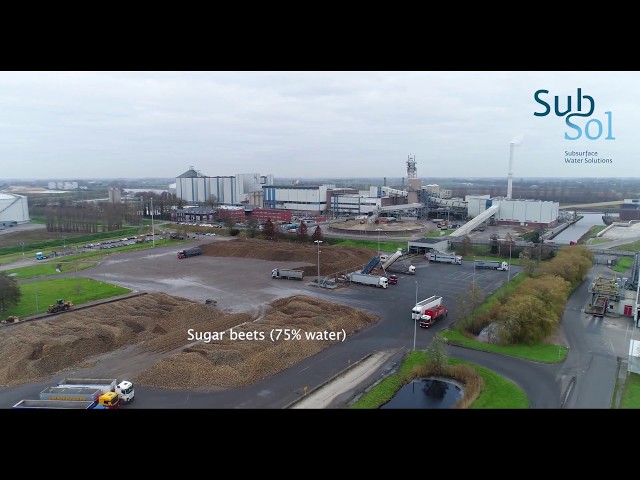