This study defines the impact of the ‘Urban Heat Island’ (UHI) effect on the temperature of drinking water in the distribution network, to provide the insight needed for measures aimed at countering undesirable warming. UHI refers to the phenomenon whereby air temperature in an urban area is higher than that in the surrounding rural area.

In this project we extended the ground temperature model previously developed by KWR [see also BTO 2008.053, ‘Heat penetration into the ground +addendum’ (in Dutch)] to include urban evaporation, anthropogenic heat emissions and the heat storage capacity of buildings. We also analysed the variation in soil moisture content and its influence on water temperature in the distribution network.

The model is validated for a peri-urban and an urban area. Future scenarios are simulated for 2030 and 2050 for the G and W+ climate scenarios of the Royal Netherlands Meteorological Institute (KNMI). Based on the predicted drinking water temperatures, we calculated the risk of pathogenic regrowth in the distribution network. 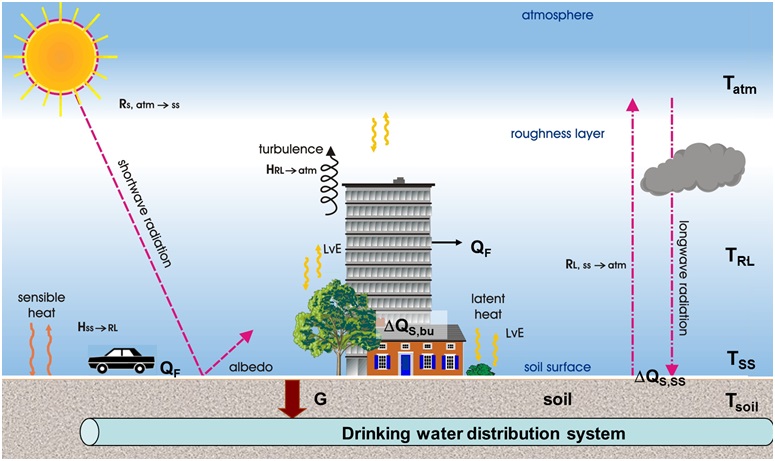 Schematic representation of the heat transfer from the atmosphere, via the ground to water in the urban DWDS.

With the new model we show that it is possible to use meteorological information and values cited in the literature to predict urban ground temperature, and thus to estimate the water temperature in the distribution network. The risks vary depending on the area (in hot spots, long-term exceedance of the 25 °C limit occur), which means that each area requires a tailored approach. Before the implementation of the model is possible, additional research is needed into which local sources are the most important contributors to ground warming.

The model can be used for different objectives: i) to calculate the impact of measures, ii) to evaluate the impact of different anthropogenic sources and support the identification of hot spots, and iii) to predict temperature over a number of days (previous research) and also over the long term, for example in 2050 (this study).