In high sandy ground regions there is frequently a phase difference between water supply and demand. During the winter period there is a water surplus because of the rainfall and high river discharge, while in the summer water shortages occur as a result of high evapotranspiration levels. When summers are dry this can result in water shortages for agriculture and nature, as was the case in 2003. It is expected that these dry periods will become more frequent as a consequence of climate change. If no measures are taken, the drought sensitivity of high sandy ground regions will grow steadily.

One promising approach to the desiccation of high sandy grounds is the storage of water surpluses during the winter season, for subsequent use during the summer season. This approach requires that storage space be found for the water. KWR studies the possibilities of using the subsurface in desiccated nature areas for this purpose. These areas do indeed have the subsurface space for water storage if the groundwater levels can be raised. A side benefit of this rewetting of nature areas could be the attainment of the prevailing nature objectives.

To study the potential of desiccated nature areas for water storage, KWR conducted research over 2012-2014 within the Knowledge for Climate project (HSDR 3.7). The objective was to identify possibilities for water storage in De Stippelberg and to develop concrete measures to this end. The focus was placed on the provision of water from external sources, though classical rewetting measures, such as drainage containment and forest conversion, were also examined.

You’ll find more information about this project’s background and outcomes on this website. The project was financed by Knowledge for Climate, the Aa and Maas Water Board, the Province of North Brabant and the Dutch drinking water companies.

The Stippelberg region is a characteristic high sandy ground area, where nature and agriculture regularly have to confront water shortages and drought. Around 1900, De Stippelberg was a wetland area covered in wet heaths, bogs and pools. The area was subsequently quarried, its soils were drained and it was then forested. The area surrounding De Stippelberg was prepared for agriculture. This involved intensive dewatering by means of a system of ditches and drains. At the same time the demand for water began to increase. As a result, in the course of time, De Stippelberg became a desiccated area. This can be seen in the summer groundwater levels (Figure 1). 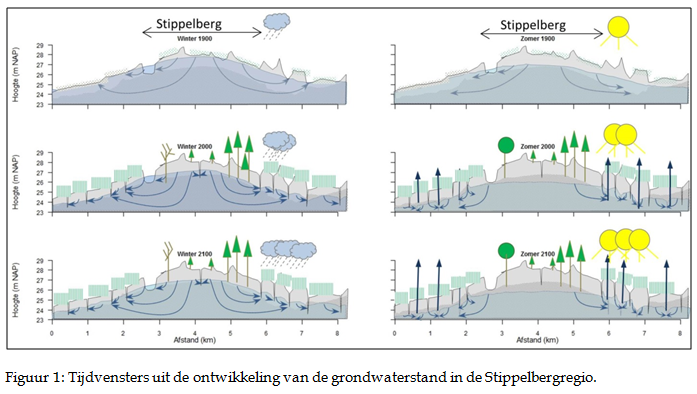 Time windows in the evolution of groundwater levels in the Stippelberg region.

During the winter season the precipitation surplus leads to the development of a groundwater bulge in De Stippelberg (Figure 3). This bulge bubble begins to subside at the start of the growing season as a result of the evapotranspiration and regional drainage. The groundwater levels therefore sink significantly during the summer season and the supply of water to the agricultural area already begins to stagnate early in the growth season. Water balance calculations indicate that De Stippelberg currently hardly contributes at all to the water provision of the agricultural area. The main reason is the rapid subsidence of the water bulge because of the dewatering of the area around De Stippelberg.

In the middle of De Stippelberg there are deep dewatering ditches, which were excavated at an earlier time to improve the dewatering of the forest. Because of desiccation, these ditches are dry for most of the year. Two infiltration tests were conducted to examine whether the ditches could be used for the opposite objective, that is, to infiltrate water (Figure 6). To this end, water was drawn from the Bakelse Lakes.

The tests showed that the infiltration speed was not an impediment to building up a water stock in De Stippelberg. The good water permeability of the soil allows the infiltrated water to spread quickly (Figure on the website). Even at a distance of 150 m the groundwater level rose by 3 cm. This indicates that a built-up stock cannot be kept in De Stippelberg for very long. 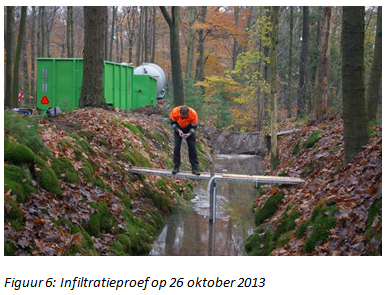 The geohydrological characteristics of De Stippelberg confirm the existence of two valves  that can be turned to increase the buffer function of De Stippelberg. The first valve relates to De Stippelberg’s outflow points. By closing this valve the rapid subsurface discharge of water from De Stippelberg during the winter season could be curbed. By raising the level of the drainage base by 5 cm, 0.1 million m3 of groundwater can be saved. This would call for adjustments to the regional surface water system.

The second valve refers to De Stippelberg’s water supply. By opening this valve more, De Stippelberg’s groundwater would be further recharged, with the result that more water would be available during the growing season for nature and agriculture. In this manner, a potential 0.3 m3 could be captured; naturally this would require a permanent provision. Temporary provision, over a period of two months, would increase the water stock by 0.1 m3. This water could be supplied to the surrounding area during the growing season (Figure 7), and would contribute to the water supply for a maximum of 4 km2 of agricultural land during a drought year like 2003.