In an earlier project, ‘Developments in water quality at surface water intake points for drinking water supply’, prognoses were made for water quality under the impact of climate change and changes in the use and application of compounds. The current project aims to update the previous water quality prognoses and scientifically underpin them, by reaching conclusions based on a longer period (2011-2014) and more extensive dataset.

We are setting new concentration-river flow ratios for the special-attention contaminants in the previous BTO study, on the basis of the water quality and river flow dataset of 2010-2014 (inclusive) at the Lobith, Eijsden and Keizersveer sites. By combining these ratios with river flow prognoses, we  estimate the water quality with regard to the special-attention contaminants for the year 2050, for the current climate and other climate scenarios, and under current and future compound loads, in accordance with the previous BTO study.

The study will lead to a report and a scientific article. The water companies involved will then have an idea of the possible concentrations of pharmaceuticals and pesticides they will confront in 2050, and can anticipate this in their water treatment. 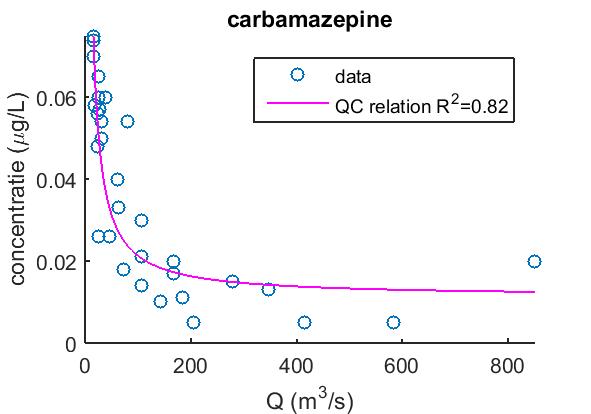 Concentration-river flow ratio of carbamazepine in the Meuse at Eijsden.