In the analysis of microbial safety of drinking water, it has been shown that dune passage, with a removal rate of up to eight log units, forms an important barrier against pathogenic microorganisms. Nonetheless, faecal contamination indicators are sometimes found in water abstracted following dune passage. This can probably be explained by the water’s re-contamination in and in the vicinity of the recovery wells.

What is not clear is how to avoid the re-contamination, nor what potential risk it represents. This project aimed, by means of a test set-up, to clarify the underlying short-circuit flow mechanisms that might be responsible for the re-contamination.

Short-circuit routes in the unsaturated zone

Recent research shows that in dune passage the unsaturated zone provides effective protection against microorganism contamination via rainwater from the surface. But sometimes short-circuit flows occur, which can become pathways for the rapid transport of bacteria. It has also been shown that microorganisms that remain behind in the unsaturated zone can survive for a long time.

Moreover, knowledge has been collected about the spreading of faecal contaminants in the dune area, and of the pathogens they contain. Over a longer term, microorganism accumulation can occur in the unsaturated zone, as a result, for instance, of the presence of animals and thus of faecal matter.

The above research led to new theories about the causes of the presence of indicator organisms in abstracted dune water. The possible underlying reasons for this were described as follows:

The project’s goal was to test these three hypotheses. Mechanisms 1 and 2 were assessed using a test set-up, in which the behaviour of indicator organisms was tested in a column set-up. Mechanism 3 was tested in a practical setting at Dunea. 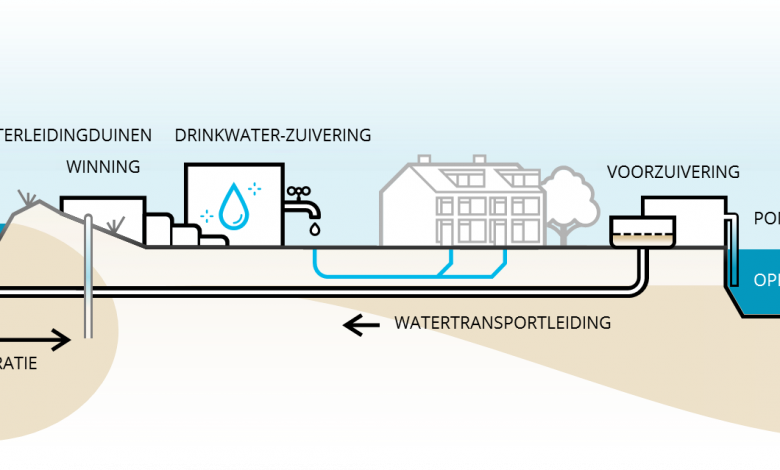 A column set-up was used to study whether the microorganisms present in the unsaturated zone could become remobilised under specific conditions. To determine the conditions under which microorganisms remobilise, a literature study was used as a basis for the design of a test set-up with columns, which tested a number of variables of relevance for Dunea. For the sake of good synergy, we closely linked the tests with existing DPWE research into the mobility levels of E. coli and enterococci.

The information collected in this project for the specific situation of Dunea was linked to information produced by earlier research projects in the field of short-circuit streams in the unsaturated zone, and their effects on microorganisms. This provided the basis for recommendations concerning the measures that can be taken immediately, and the additional research required to further clarify re-contamination problems.