The risk of the spread of wildfires is closely related to the water management. The flammability of the vegetation in particular is partly a function of the availability of water. The drier the soil, the drier the plants, the faster the fire will spread, which in turn increases the likelihood of an unmanageable fire. Climate change means an increase in the frequency and intensity of dry periods. One result is the increased chance of wildfires. The timely signalling of a fire risk can save human lives and prevent damage to nature, buildings, drinking water supply and infrastructure.

The fire-fighting authorities employ a system known as the wildfire spread model (Dutch abbreviation: NBVM) to predict the speed of a fire’s spread during a wildfire event. Thanks to recent scientific insights into the evaporation behaviour of natural vegetations, this system has been considerably improved by this recently concluded project. Based on new knowledge about the evaporation behaviour of natural vegetations, a module was developed to predict the availability of water in fire-risk areas and thus to estimate the vegetation’s dryness index. By improving the NBVM with this information, the fire-fighters’ action framework can be refined and they can act more effectively during a wildfire. Moreover, the module for the simulation of the dryness index can be used to gauge how dry a specific area is and thus how much of a fire-risk it represents.

A moisture module was developed for the Veluwe test area. In 2017, a field experiment was set up in which monthly samples were taken of two vegetation types (heathland and purple heath grass) to determine their moisture content. These data were used to produce translation functions to translate hydrological model results into vegetation moisture conditions. We can effectively represent the measurements using simple curves that describe the annual evolution of the moisture content. As soon as a dry period occurs, a moisture shortage arises, and the moisture content will deviate from these curves.

The added value of the moisture model is most evident when a lengthy dry period occurs. In such cases, the module provides considerable insight into the spatial differentiations in the moisture content of the overgrowth. We carried out the calculations of the moisture content and fire-spread speed for the year 2003. The month of August 2003 was among the 5% driest since meteorological measurements were first recorded by the Royal Netherlands Meteorological Institute (KNMI). Between 10 July and 15 August 2003, the simulated moisture content of the vegetation dropped from 0.60 to 0.53 for the heathland overgrowth, and from 1.15 to 0.43 for the grassland overgrowth (water weight/dry matter weight). At the end of the dry period, the soil was completely dried out and part of the overgrowth had died.

According to our calculations, in the event of an outbreak of a wildfire in our research area the fire would spread at a rate of 375 m/hour before the dry period, and at 500-600 m/hour after the dry period, assuming a wind velocity of 5 m/second. In other words, the dry period accelerates the fire-spread speed by a factor of 1.3 to 1.6. This demonstrates how sensitive the spread of fire is to the vegetation’s moisture content, and that accurate figures of this moisture content are needed for controlling wildfires. 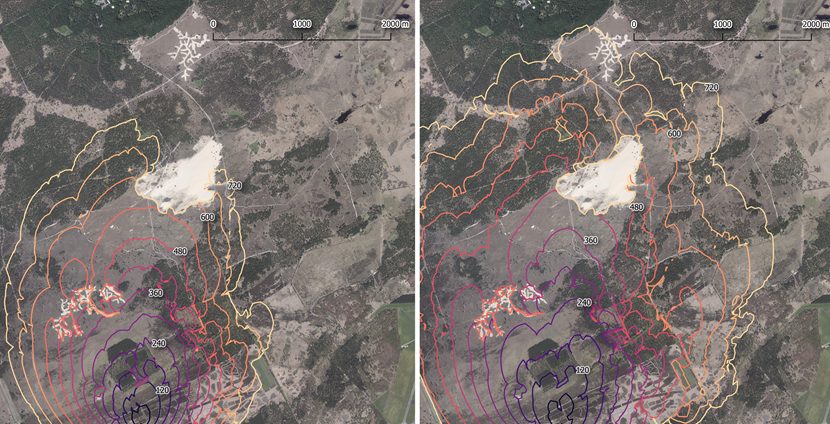 Left, the fire-spread in minutes before the dry period and, right, following the dry period. The distance between the lines is always one hour and indicates the location of the front.

The moisture module provides insight, in a unique way, into the dryness index of the overgrowth in a natural area with deep water tables. These data are of great importance now that the climate is changing and the chance of wildfires is increasing. The module can also be used to conduct climate projections, so that we can detect future fire-risk areas and make them safer by working together with land managers.