The water extraction activities of the Evides water company in the Middel- and Oostduinen area have been substantially modified since 1999. The aim is to make the open, artificial infiltration and restoration of the wet and dry dune nature more sustainable. In order to determine whether the objectives for nature restoration have actually been achieved, this project has been monitoring and evaluating water levels, chemistry and vegetation since the 1990s.

Originally, water extraction in the Middel- en Oostduinen consisted of the infiltration of river water into canals with recovery in shallow drains. There were also deep wells available for the extraction of deeper groundwater. This approach to extraction had led to the drying out of the area, eutrophication and also to a lot of excavation work.

Pre-treatment of the infiltration water started in 1996, resulting in a major reduction in the phosphate load. As a result of this switch to pre-treatment, it was possible to redevelop the extraction area of the Oostduinen in line with the ‘Open Infiltration New Style’ (OINS) concept in 2000 and 2001. The idea behind OINS is to achieve both ‘green’ and ‘blue’ objectives. Green objectives are natural values that are preserved sustainably in ways appropriate for the area in question. Blue objectives are understood to mean that drinking water can be produced more efficiently while using less land and also reducing costs, maintenance and energy consumption.

The measures consisted of a nature-friendly design for the infiltration canals (with meandering shape, shallow banks), the reversal of excavation work as much as possible and nature restoration measures (including the removal of sand and scrub land, periodical mowing and the restoration of the landscape). By introducing OINS, it was also possible to infiltrate more water and considerably reduce the extraction of deep groundwater. The levels of the infiltration channels and the drains in the infiltration system were optimised to encourage the development of wet dune valley vegetation. 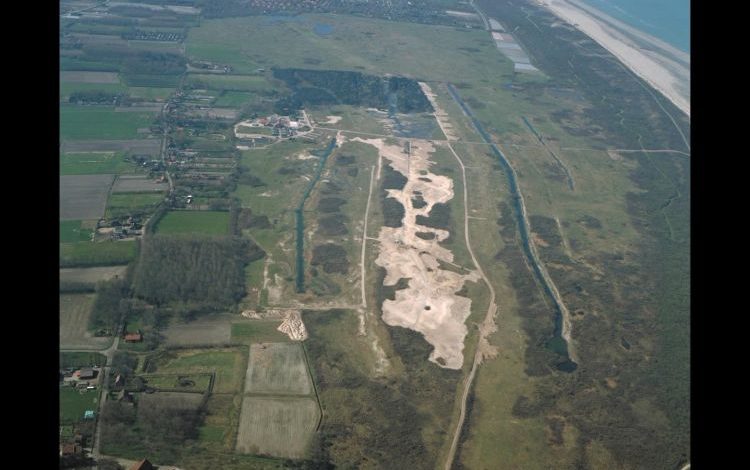 Aerial photo of the Oostduinen during the redevelopment work in the infiltration area (photo: Evides)

The effects of the work were followed by intensively monitoring groundwater levels, soil chemistry, hydrochemistry and vegetation. The Evides water company also monitored the breeding birds. That made it possible to evaluate the extent to which the objectives formulated for nature recovery have been achieved.

Vegetation types, plant species and breeding birds were mapped out for the entire area. Developments in vegetation, the presence of typical plant species, groundwater levels, groundwater chemistry and soil base chemistry were registered at eleven locations in ‘measurement arrays’. This established a picture of the abiotic impact of the measures and how they affect the vegetation. Because the monitoring has been conducted over such a long period (starting in 1999), it was also possible to determine whether recovery has been sustained.

The monitoring was conducted in close collaboration between the Evides water company and KWR. The monitoring data up to the end of 2014 have been comprehensively evaluated and monitoring has continued in the meantime.

The careful coordination of the water levels in the infiltration lakes and the extraction level of the drains has resulted in a more stable water regime with only slight fluctuation between the seasons. Base-rich conditions have emerged in more places than expected in dune valleys. The dune valleys in the infiltration system of the Oostduinen area are rich in bases and the ground is nutrient-poor in places where there is a thin lens of dune water on top of the infiltration water.

In the Middelduinen area, a large part of the valleys that were eutrophicated by phosphate-rich river water as a result of infiltration are now nutrient-poor again as a result of the removal of the top layer. The development of nutrient-poor waters has been only partially successful. The water vegetation that initially developed, with varieties of base-rich, nutrient-poor waters, held up to only a limited extent because of the high nutrient fluxes inherent in the intensive infiltration system.

The redevelopment was very successful in terms of restoring species-rich dune valleys and dune grasslands. The dune valley vegetation with high natural values in the Oostduinen is now completely dependent on the current infiltration system. This restoration was only possible thanks to the far-reaching integration of water extraction technology accompanied by long-term sophisticated management.

There have also been major benefits for nature in the Middelduinen. Because artificial infiltration has ended here and deep groundwater extraction has been reduced, the link between wet nature values and water extraction is not as strong. The Middelduinen area now has a more natural character as a result.