After celebrating the news that our extensive research proposal was accepted, the rewarded 96 hours of sample analysis time at the European Synchrotron Radiation Facility (ESRF) in Grenoble can only be described by one word; amazing. The electromagnetic radiation produced by the synchrotron can be used to derive the structure of a material with atomic resolution. Together with Case van Genuchten (University of Utrecht) and Simon Mueller (Evides), the impact of three oxidizing agents and three co-ions on iron (hydr)oxides precipitates was studied to improve our understanding of arsenic removal in varied redox and filtration conditions that are relevant for drinking water production at municipal scale.

Apart from all the electrical equipment, beeb-sounds, blinking indicator lights and sample preparation rooms packed with laboratory instruments, the most interesting feature of ESRF is the daily changing batch of researchers from various scientific disciplines. All of them are drawn to high-intensity radiation originating from electrons travelling at near-speed of light velocities in a ring with a circumference of 844 meters. This so-called ‘synchrotron light’ is composed of electromagnetic radiation with wavelengths ranging from the microwave to X-ray spectrum. By projecting light with a specific wavelength on samples in one of the 42 so-called ‘beamlines’, the ESRF facilitates approximately 2000 experiments and therefore provides data for 1800 publications per year. Research conducted at Europe’s most powerful source of synchrotron light is for a large part related to the fields of protein crystallography, materials science and (fundamental) physics. As part of the TKI Advanced Oxidation Coagulation Filtration (AOCF) project, some precious ‘beamtime’ was used to enlighten the molecular structure of various iron oxide precipitates.

In conventional drinking water treatment, removal of arsenic by oxidation followed by co-precipitation is a widely applied method. Oxygen-driven oxidation is the current standard but other oxidants, like permanganate and chlorine, could also be used to drive these reactions as well. A considerable part of solids which are produced in these process have no ordered (crystalline) structure, which renders X-ray diffraction techniques unable to obtain meaningful structural information. Using X-ray absorption, the local bonding environment and oxidation state of a specific element can be retrieved from these solids. Therefore, this visit to the synchrotron elucidated the difference in molecular-scale structure of the solids formed with these three oxidants. In addition, the impact of co-occurring ions common in surface- and groundwaters on the molecular structure was studied as well. This information will help to improve our understanding of the formation, growth and aggregation of solids generated during coagulation processes. These insights will then be used to make knowledge-based improvements customized for the water composition of the local water source on (inter)national conventional drinking water treatment plants. 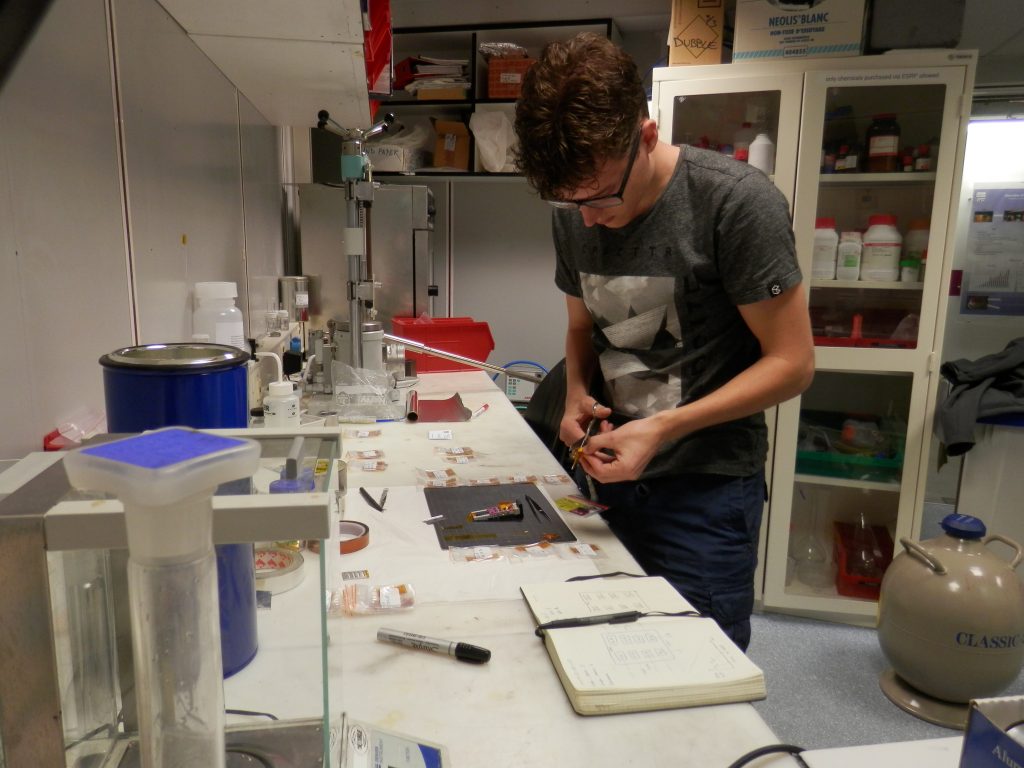 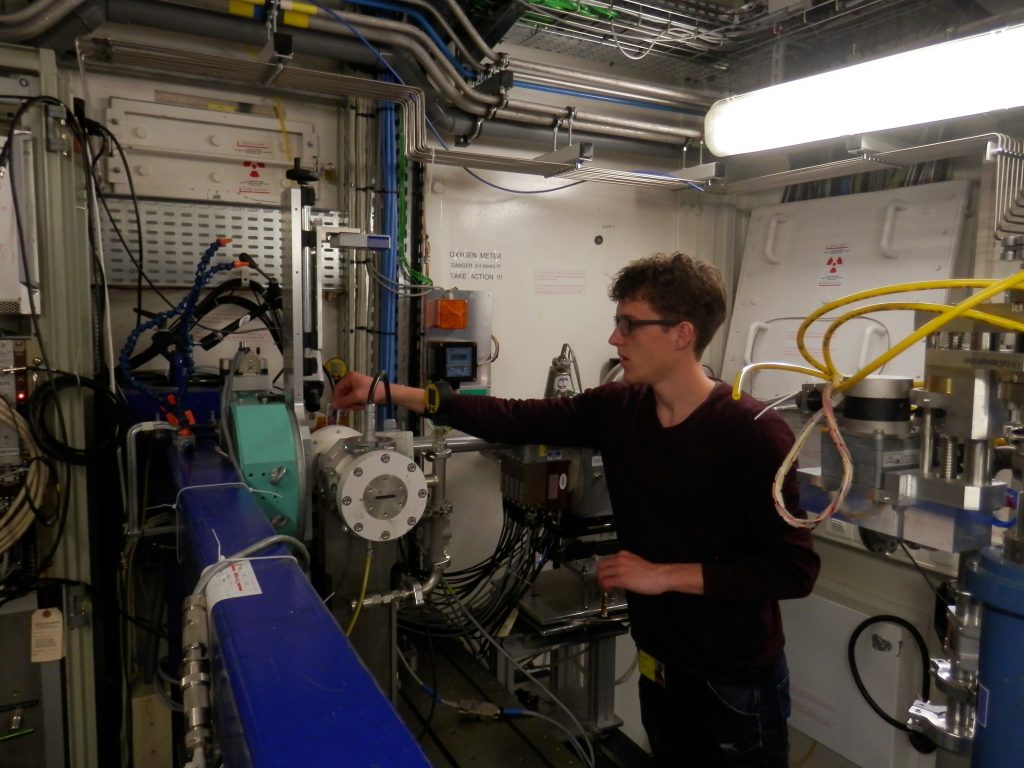 Placing the samples in the trajectory of the beam in the measurement room. 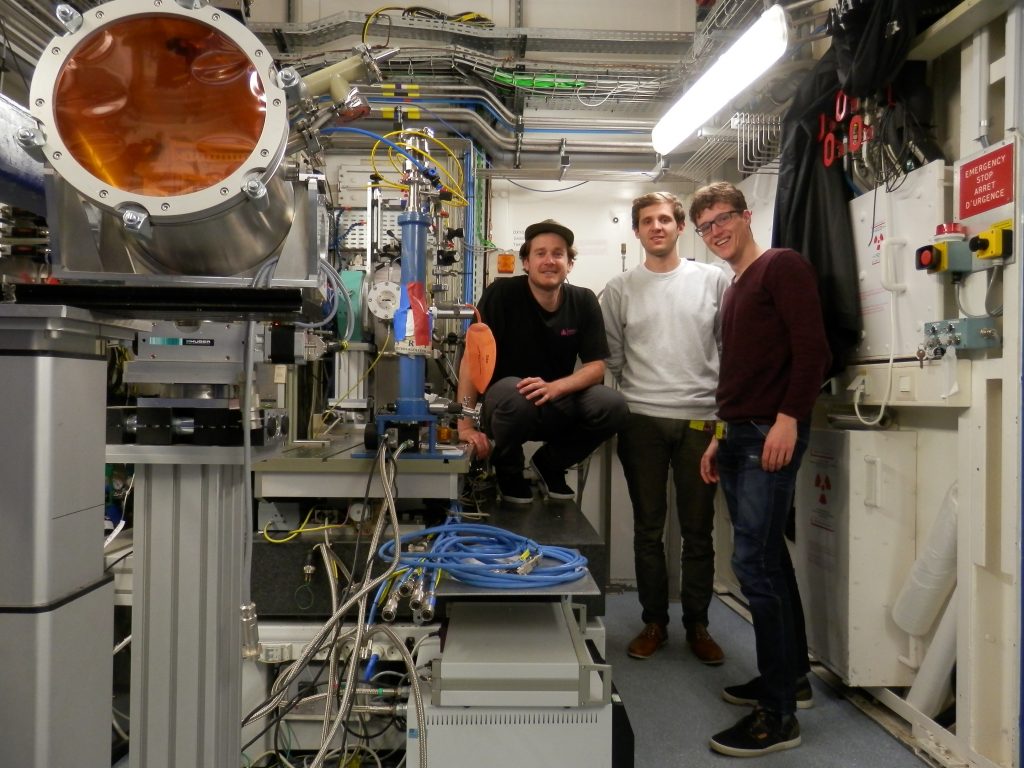