The European Monitoring Centre for Drugs and Drug Addiction (EMCDDA) today published the result of drug monitoring in the wastewater of cities. Professor Pim de Voogt from KWR once again studied Amsterdam, Utrecht and Eindhoven. At the beginning of this year he performed the same study in nine small municipalities in the province of Utrecht. Conclusion 1: the difference between cities and towns appears small. Conclusion 2: drug use in Utrecht and Eindhoven increased in 2016.

To undertake the wastewater research the researchers collated the chemical analyses of wastewater samples from more than 60 towns and cities in Europe during a single week in March. The analyses concerned cocaine, amphetamine, ecstasy, methamphetamine and cannabis. KWR is involved in this research project, working alongside the De Dommel Water Board (Eindhoven), Waternet (Amsterdam) and the Stichtse Rijnlanden Water Authority (Utrecht).

Confronting figures are not popular

Because the long-term wastewater study only provides a picture of drug use in the three major cities, Professor Pim de Voogt of KWR is once again urging a larger scale study. “So far we have only undertaken wastewater studies in 20 of the 390 municipalities in the Netherlands. The administrations of these municipalities get to see confronting figures about drug use which, after publication, generate substantial discussion. In the media our findings generally generate negative attention for them. The commendable initiative shown by the administrations to reveal the drug problem is not reported and two days later peace has again returned to the Netherlands”.

De Voogt: “For the sake of clarity: The municipalities of Amsterdam, Utrecht and Eindhoven do not commission this research. KWR undertakes the European wastewater studies in those cities together with the water boards. However, the small municipalities in the province of Utrecht (as well as Enkhuizen for example) do commission KWR to undertake this research”.

During the last six years (2011-2016) KWR has analysed the Dutch results originating from the cities of Amsterdam, Utrecht and Eindhoven and reports its findings to the EMCDDA. The results for Amsterdam for 2016 are not available due to a technical problem in the processing of the measurements.

Also see: Dutch cities once again in the Top 5 for drug use en Drugs of Abuse.

The daily loads of benzoylecgonine (as a cocaine indicator), MDMA (ecstasy), amphetamine, methamphetamine and THC-COOH (as a cannabis indicator) are calculated on the basis of measurements. The benzoylecgonine loads in Utrecht and Eindhoven, which were constant or showed a slight decline in 2011-2015, appear to have shown a substantial increase in 2016 (50-100%).

For the party drug MDMA (ecstasy), as in recent years, 2016 once again showed the Netherlands to be the highest user in the whole of Europe. Utrecht showed a more or less constant load during the 2012-2016 period (in 2011 a dump was detected in Utrecht), in Eindhoven direct dumps of MDMA were detected several times in recent years, however, the data for 2016 shows Eindhoven to have a ‘normal’ pattern of use (with increasing use of MDMA during the weekend).

Utrecht showed a more or less constant use of amphetamine in the period 2011-2016 and is at an average European level. Eindhoven, as in previous years, also showed occasional high loads in 2016. For example, on one day during the sampling week in March 2016, a total of almost 15 kilos of amphetamine was discharged to the water treatment plant in the wastewater. The dumps have no impact on the treatment capacity of Eindhoven’s regional water treatment plant.

The Dutch cities show the highest use of cannabis in the whole of Europe. The loads measured in Utrecht and Eindhoven in 2016 correspond with those found in these cities in the period 2011-2015. They have however doubled compared to last year.

How wastewater shows drug use 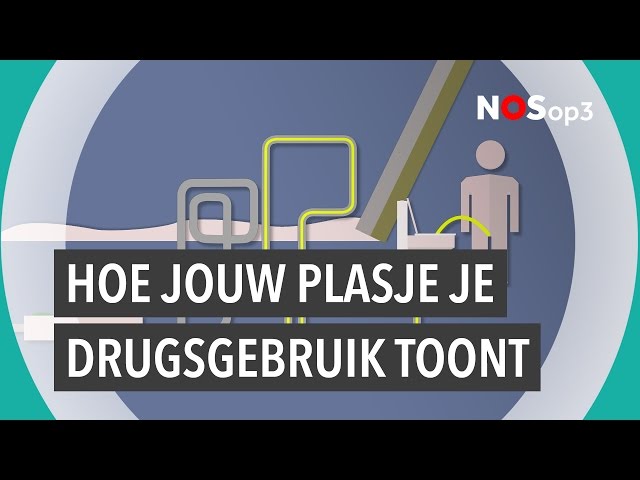 How your wee shows the drugs you take – Source video: http://nos.nl/op3/artikel/2148201-jouw-plasje-liegt-niet-over-je-drugsgebruik.html