The European Monitoring Centre for Drugs and Drug Addiction (EMCDDA) today published the results of drug monitoring of wastewater in nearly 85 large European cities. KWR, for the eighth time, analysed the wastewater of 1.5 million residents in the cities of Amsterdam, Eindhoven and Utrecht. Cocaine use increased slightly in Amsterdam and Utrecht, while remaining stable in Eindhoven. And for the first time, the monitoring week turned up traces of a drug-waste discharge in Utrecht. There was also a notable increase in methamphetamine consumption in Amsterdam.

The KWR scientists monitored wastewater samples over a period of one week for the research. The samples were analysed for the presence of cocaine, amphetamine, ecstasy and methamphetamine. As in previous instances, the research was conducted in close collaboration with the three Water Authorities involved: Watercyclusbedrijf Waternet (Amsterdam), Waterschap De Dommel (Eindhoven) and Hoogheemraadschap Stichtse Rijnlanden (Utrecht). Researcher Thomas ter Laak: ‘To be very clear, the municipalities of Amsterdam, Utrecht and Eindhoven have not, up to this point, been the clients in this research work. KWR finances the project with EU funding and works together with the water managers. For their part, the small municipalities do pay for the research.’

Wastewater research: informative and near real-time

Since the long-running wastewater study only provides a picture of drug use in the three big cities, over the last few years KWR has also done research in smaller Dutch municipalities; for example, in nine towns in the Province of Utrecht. By periodically analysing the wastewater of a large number of municipalities one can come up with a ‘national map’ of drug use in the Netherlands. ‘In such a map,’ says Ter Laak, ‘we can get a picture in near real-time of daily consumption of all kinds of substances. Besides drugs, this could include slimming agents (dinitrophenol), pharmaceutical residues (sildenafil), or a measure of human exposure to fire retarders or softening agents.’

The ‘National Drug-Use Map’ also shows that drug-waste is discharged into the sewers in many places. Although a discharge made during the monitoring period renders the analysis of drug use impossible, such occurrences do provide very interesting information about how and where synthetic drugs are produced. An increase or deviation from the weekly drug-use patterns are often the first sign of a discharge. The relation between the drug and its metabolite, which appears if a person consumes the drug, can then indicate whether a drug has been discharged or consumed. Moreover, specific chemical markers (typically precursor or intermediate products) can also provide the basis to determine whether drug-waste has been discharged.

Recently Ter Laak and colleagues in NRC calculated that the annual trade in synthetic drugs produced in the Netherlands did not amount to 18.9 but exceeded 21 billion euros. Ter Laak: ‘We also offer our research to municipalities as a policy instrument in the social domain, to determine local drug use and assess the effectiveness of measures. With regard to security and public order, the research also offers a forensic tool to trace the production of synthetic drugs. See also Sewage research becomes policy instrument for towns (2016).

‘With the wastewater research,’ says Ter Laak, ‘we can monitor the average drug use for the total population of a city, town or region, from day to day. For the three cities studied, this amounted to 1.5 million people. The wastewater research shows total drug use, but says nothing about individual users, groups of users or their socio-economic background. But social-scientific research, like RIVM’s Leefstijlmonitor, can obtain this information on the basis of a representative sample of about 10,000 Dutch people. So, the two methods are complementary and together present a picture of the drug situation in the country.’

Results of 2018 drug use in detail

For eight years now (2011-2018), KWR has monitored drugs in the sewers of Amsterdam, Utrecht and Eindhoven, and reported the results to the EMCDDA. The results for each substance are shown below.

Cocaine consumption in the Netherlands over 2011-2017 was relatively stable, though it increased slightly last year in Amsterdam and Utrecht. Amsterdam clearly has the highest cocaine use per resident, when compared to the other cities studied in the country. Average cocaine use in the smaller municipalities between 2012 and 2018 is comparable to that of cities like Utrecht and Eindhoven.

With regard to cocaine use in Europe, only in Bristol are consumption levels higher than in Amsterdam. Utrecht and Eindhoven are ranked 19 and 20.

# no data available.
The figure above shows pure cocaine use, which was derived from measured loads of benzoylecgonine, cocaine’s metabolite.
The figure above presents cocaine use, in contrast to the other four substances, for which only the loads are shown. This is because, only in the case of cocaine is there detailed information on how much benzoylecgonine is excreted by the body after cocaine is consumed. This permits the backward calculation of the drug’s consumption. The cocaine use shown in the figure refers to 100% pure cocaine. The average purity of street cocaine is around 68% (average purity in 2017, according to Trimbos Institute data). This means that the numbers in the figure need to be multiplied by 1.5 to determine cocaine street use or cocaine sold by dealers.

Methamphetamine is consumed very little in the Netherlands. Over the last few years, it was only detected twice in Utrecht and Eindhoven, while the Amsterdam loads have quadrupled compared to 2012. Whenever an average consumption dose of 25 milligrams is apprehended, this represents about 2100 methamphetamine doses per day. Moreover, in Amsterdam the daily consumption doses of cocaine and amphetamine have increased by 24 and 12 times, respectively. It is striking that methamphetamine is also found in the wastewater of smaller municipalities.

Methamphetamine consumption in the Netherlands is low compared to other European countries. The top five cities are located in Germany and the Czech Republic. Methamphetamine use in Amsterdam, which is ranked 18, is 7 times lower than the number 1 city. Eindhoven’s consumption is actually 78 times lower than the top city, placing it in the 45th position. 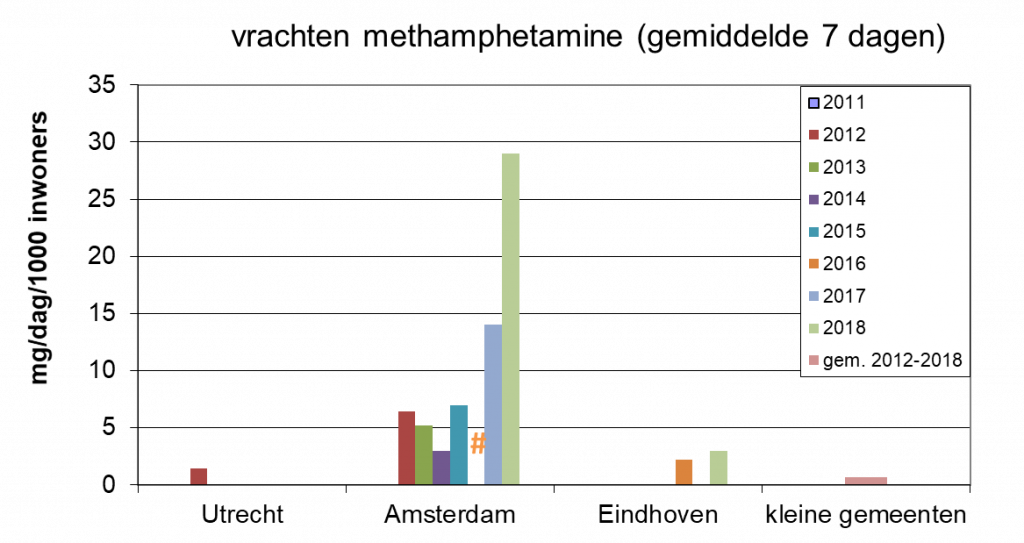 With regard to the party-drug MDMA (ecstasy), in 2018, as in the preceding years, the Netherlands recorded the highest consumption levels in Europe. Utrecht recorded a relatively constant level over 2013-2017, but in 2018 the figure increased by a factor of 2. In 2015 and 2016, Eindhoven showed a normal MDMA consumption pattern (with higher use on weekends). In the other years, consumption levels in the city could not be properly measured because of big discharges of drug-production waste containing MDMA residues. There are increasingly advanced wastewater analytical methods that make it possible to distinguish consumed MDMA and discharged MDMA, but they were not used in this European monitoring campaign. In Amsterdam, an increase in the MDMA load was recorded in the period 2011-2017, but this trend did not continue in 2018. The average MDMA load in the small municipalities is a slightly lower than in the larger cities studied.

The Netherlands is at the European top when it comes to MDMA consumption. Amsterdam is number 1 and Utrecht is number 2; consumption in both cities is twice that of the third-placed city (Zürich). The Eindhoven data for 2018 were not included, because no MDMA use was observed, though an MDMA discharge was.

* Load not (only) originating from consumption. # no data available.

Amphetamine use in Utrecht over 2011-2017 remained more or less constant, remaining around the European average. Eindhoven, as in previous years, recorded a very high load in 2018, which can be ascribed to discharges into the sewer of drug waste with residues of amphetamine. The discharges have no impact on the treatment capacity of Eindhoven’s regional water treatment plant. In 2018, for the first time, a discharge connected to amphetamine-production waste was recorded in Utrecht. On average, amphetamine consumption in the smaller municipalities is higher than it is in Utrecht and Amsterdam.

As far as amphetamine use is concerned, Amsterdam is ranked 9th in Europe. For Eindhoven and Utrecht, the 2018 figures could not be calculated because confirmed discharges were observed of synthesis waste originating from amphetamine production.

* Load not (only) originating from consumption. # no data available.