Prof. Pim de Voogt, is – after a fruitful career of more than 25 years – retiring from the University of Amsterdam (UvA). He will nevertheless continue working one day a week at KWR. On Friday, 2 November, a symposium was organised in honour of  De Voogt. The symposium’s theme was ‘Emerging contaminants in a changing world’, and in attendance were many colleagues from academia, the water sector and government. Pim closed the symposium with his valedictory lecture.

During his career at KWR, Pim made his mark on the water sector. Many of the methods developed under his leadership, such as non-target screening, have been adopted by the drinking water laboratories. His wastewater-based epidemiology work also won renown and was adopted by European authorities. These very powerful techniques still hold a great deal of promise in terms of improving our insight into spatial variabilities of human exposures to chemicals, and variabilities in lifestyles and health.

Pim is a versatile water expert. He perfectly embodies the worlds of both theory and practice. In his academic work at UvA’s Institute for Biodiversity and Ecosystem Dynamics (IBED), he drew on his expertise in environmental science to pave the way for valuable recommendations on chemical contamination norms for drinking water and surface water, both in the Netherlands and the European Union. In addition, he played an important role in environmental chemistry education, contributing to the research-based programme at the Faculty of Science. Over the years his research also attracted a lot of media attention. Among others, the outcomes of his investigations into the presence of concentrations of illegal performance enhancers and drugs, such as XTC, cocaine and amphetamine, in the sewer systems of big cities and smaller municipalities in the Netherlands were frequently featured in the news.

Several guest speakers addressed the symposium. Their subjects ranged from the use of pesticides in Costa Rica (Clemens Ruepert, MSc, National University of Costa Rica) to the relevance of persistent and mobile chemicals in the watercycle (prof. Thomas Knepper, Fresenius University of Applied Sciences in Germany); and from the toxicological hazards and risks of chemicals (Prof. Juliette Legler, Utrecht University) to the relevance to society of communications in environmental science (dr. Niels Jonkers). 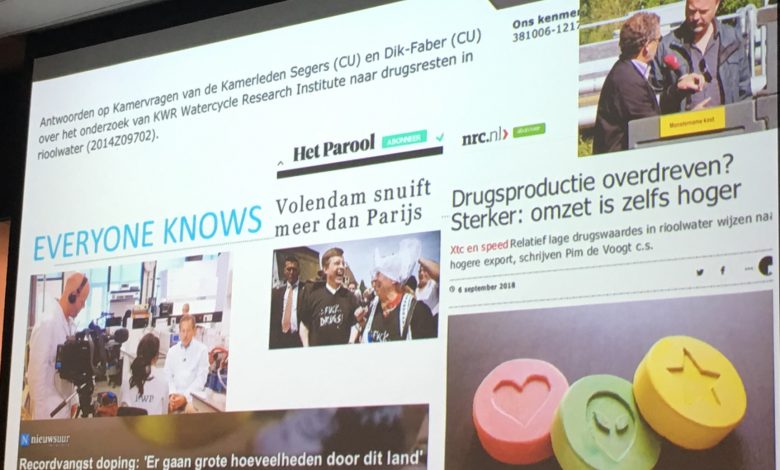 One of Pim de Voogt’s hot topics in the (Dutch) media in the past seven years is drugs of abuse in sewage water.

With the same energy and enthusiasm of a scientist setting out on his career, Pim presented his valedictory at the end of the symposium. His words clearly revealed how strongly he has been motivated by having his science applied in practice. He highlighted for example a publication of his in the ‘Staatscourant’, which was the name of the government gazette containing Dutch legislative texts, as one of his most important publications, which was built upon his scientific papers. Pim also mentioned the impressive progress that has been made in chemical-analytical techniques, and the opportunities they offer for data interpretation and evaluation. ‘The shift from non-polar to organic chemicals was one of the major changes I witnessed as a scientist in my field of Environmental Chemistry,’ he said. ‘Studying the fate and behaviour of the latter required new paradigms. I found this truly exciting.’

At KWR we are happy that we will still be working together with Pim, and that Thomas ter Laak and Annemarie van Wezel will continue securing the strong ties that exist between UvA/IBED and our research institute.