On a commission from eight towns in the Province of Utrecht, KWR has analysed the presence of narcotic drugs in wastewater. The results show that amphetamine (speed), MDMA (ecstasy), cocaine and cannabis are consumed in every one of the towns. This is the first time in the Netherlands that towns have together, at a regional level, had drug use measured in this way. The study provides objective comparative data for policy-making.

On a commission from eight towns in the Province of Utrecht, KWR has analysed the presence of narcotic drugs in the influent of the wastewater treatment plant to which the town concerned is connected. During the same week (seven days), the wastewater influent at all the plants was representatively analysed for the entire 24-hour period for the presence of five drugs: amphetamine (speed), MDMA (ecstasy), methamphetamine (crystal meth), cocaine and  cannabis. KWR’s research team is headed by Professor Pim de Voogt.

KWR stresses the importance of sewage research as an instrument in municipal drug policy. Together with qualitative research based on questionnaires targeting different groups, this quantitative sewage research provides concrete guidance for administrators and policy officials. The method offers insight into differences between regions and in times of drug use, at a relatively low cost. Moreover, the number of citizens covered by the analysis is large, that is: all of the residents in the wastewater treatment plant’s service area. Lastly, the method can also be used to detect the illegal dumping of drugs. No cases were detected in this regional research.

In 2014, State Secretary Van Rijn said that he thought that it was the responsibility of towns to actually apply this policy instrument. A few towns have in fact done so. This is the first time, however, that the analysis has been conducted at a regional level. 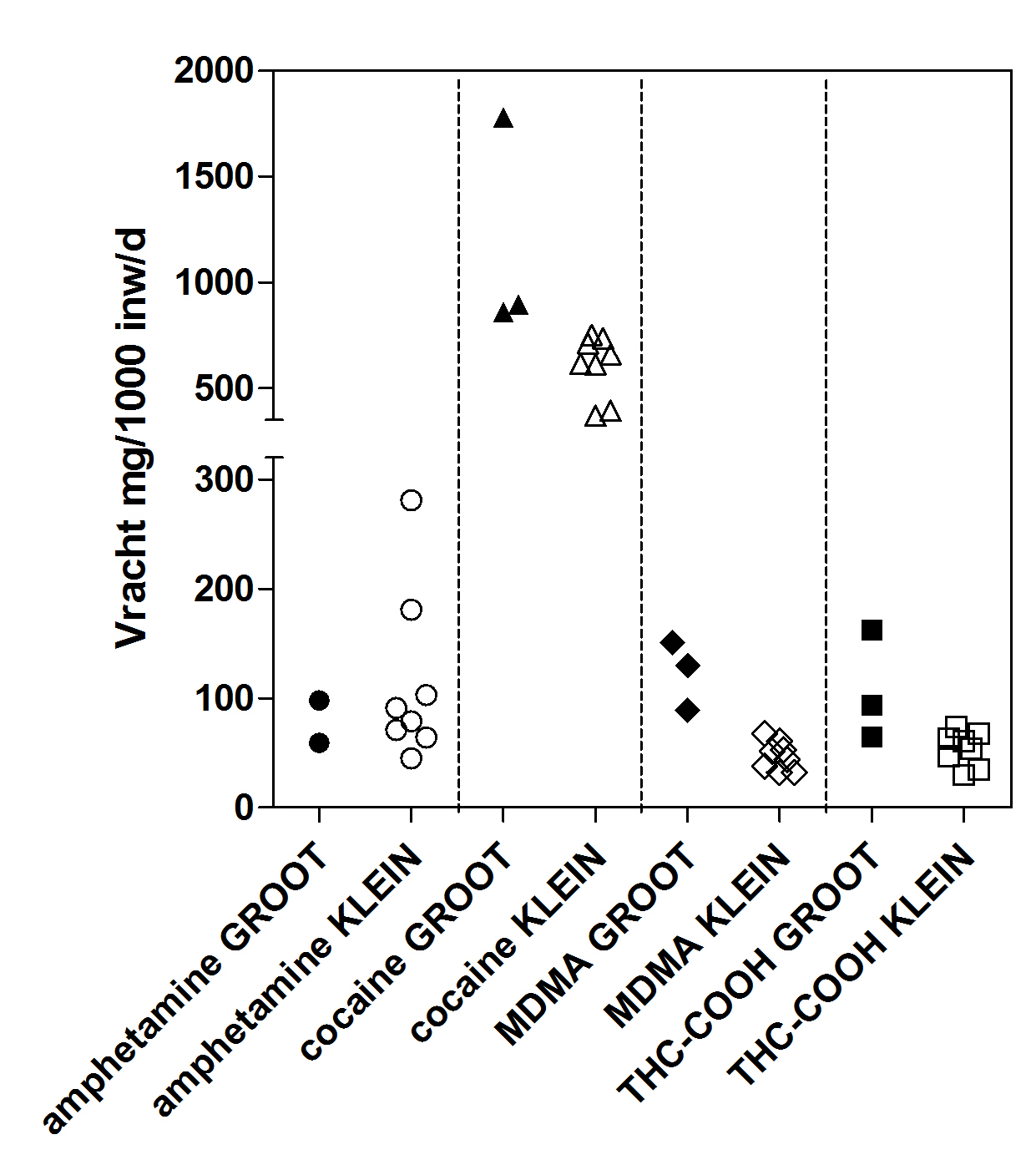 Figure: Scores by town in milligrams per 1,000 residents, per day. ‘GROOT’(LARGE’) refers to the cities of Utrecht (2016), Amsterdam and Eindhoven (2015). ‘KLEIN’ (SMALL) refers to the eight Utrecht towns (2016). [NB. For cocaine, the reference is not to load (‘vracht’) but to consumption: the number of milligrams per 1,000 residents, per day of pure cocaine consumption.

In all of the towns studied, four of the five drugs are used, namely: amphetamine, MDMA, cocaine and cannabis. The size of the drug load, expressed in milligrams per 1,000 residents, per day, is, in the case of cocaine and cannabis, significantly lower in the small towns than in the larger cities, like Utrecht, Amsterdam and Eindhoven. For amphetamine and MDMA, there are no significant differences between the large cities and small towns.

‘Because we collected samples for seven days in a row,’ says De Voogt, ‘we have a good picture of variations in drug use over the week. In the towns studied, MDMA and cocaine are clearly consumed more on weekends than on week days. But for cannabis and amphetamine no big differences between weekend and week-day consumption are apparent.’

KWR’s sampling method takes careful account of the dilution resulting from rain or increased water use (morning showers). One can calculate the exact drug load by multiplying the drug concentrations by the total volume of wastewater discharged over 24 hours. This load is a measure of the consumption of the drug concerned in the town. Since the number of residents connected to the sewer system is known, the load can be expressed per 1,000 residents. This makes comparisons between towns possible. The research method has been scientifically validated in the multi-annual European research carried out in dozens of cities and in different laboratories.