The results of seven years’ wastewater analysis have been compiled in an article published in the prestigious journal Addiction. An international group of researchers, the SCORE group (Sewage analysis CORe group Europe), analysed the wastewater of more than 60 million people in 120 cities in 37 countries. The analysis has made it possible to establish trends in illicit drug use. Among other things, this is important for governments to assist them in monitoring drug prevention policy. KWR’s ambition is to create a ‘Map of the Netherlands’, which shows drug use in every Dutch municipality. The map will be a useful tool in the fight against drugs.

The use of chemical data based on analyses of wastewater – wastewater-based epidemiology – is a rapidly developing scientific discipline, which has the potential for monitoring, among others, population-level trends in drug use in close to real-time. By sampling wastewater, for example, where the influent collects at a wastewater treatment plant, scientists can estimate the quantity of drugs used by the population connected to the sewage system. They use the chemically measured concentrations of the drugs or of their metabolites which are formed in the body and excreted in the urine.

Based on a common wastewater sampling protocol applied all over Europe, this method was applied for the first time in 2011 by the SCORE scientists to collect data on illicit drug use by the population. Since then, SCORE has collected this kind of data every year in an ever-increasing number of participating cities, including several outside Europe.

The results over the last seven years (2011-2017) have now been collected in an article that appeared today in the prestigious journal Addiction. In total, the wastewater of more than 60 million people in 120 cities in 37 countries was analysed at least once, over a one-week period, to explore the spatial population-level trends in the use of four hard drugs (amphetamine, methamphetamine, ecstasy and cocaine). Twenty-six cities in 14 countries (with a total of about 19.3 million residents) were monitored for at least five years, permitting an assessment of temporal trends in drug use.

Drug use in Europe

The research findings show that wide spatial differences exist in drug use across Europe. Cocaine dominates the drug use in cities in western and southern Europe (United Kingdom, Spain, Italy, France and Switzerland), and in most of the sampled cities cocaine consumption rose rapidly over 2011-2017. In Belgium and the Netherlands, not only was cocaine use very high but amphetamine use was as well. The consumption of amphetamine also increased in many northern European countries. On average, methamphetamine use is a little lower than that of other stimulants, but in eastern Europe (Slovakia, the Czech Republic and eastern Germany) there are a number of methamphetamine hot-spots, and the drug’s consumption is spreading to northern and central Europe. With the exception of the Netherlands, ecstasy does not dominate drug use anywhere, but its consumption did go up in most cities over 2011-2017.

The picture of drug use outside of Europe is different. Methamphetamine dominates the drug landscape particularly in North America (US and Canada), Australia, New Zealand and South Korea, with levels far exceeding those found in Europe. In South America (Colombia and Martinique) cocaine use is dominant. No temporal trends are available for these countries since the cities joined the international monitoring programme only recently. 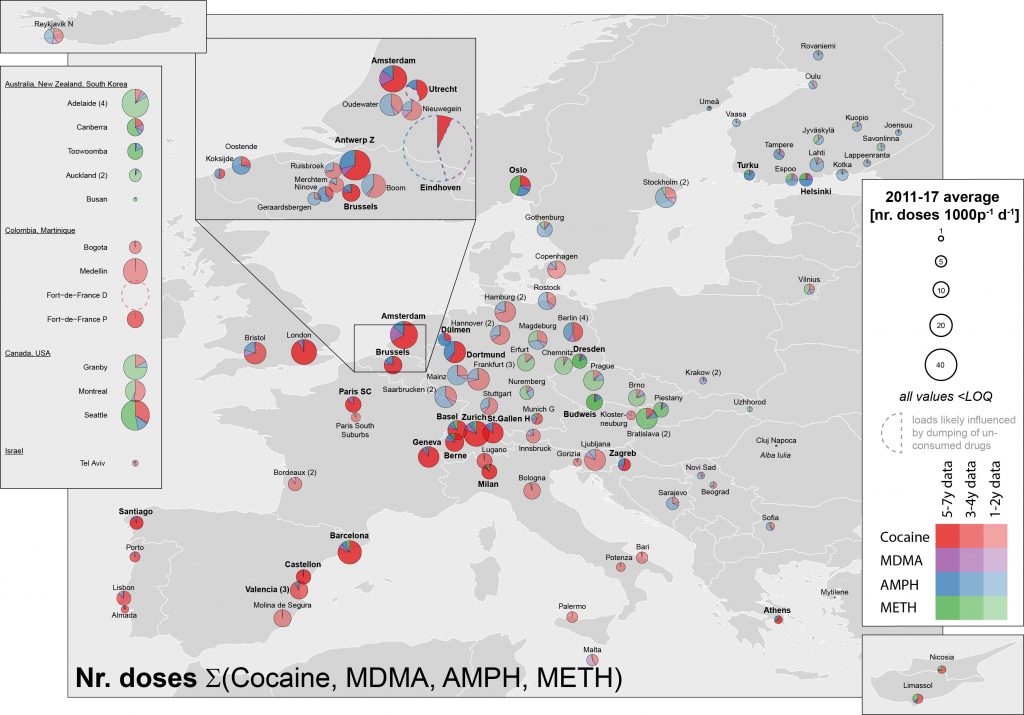 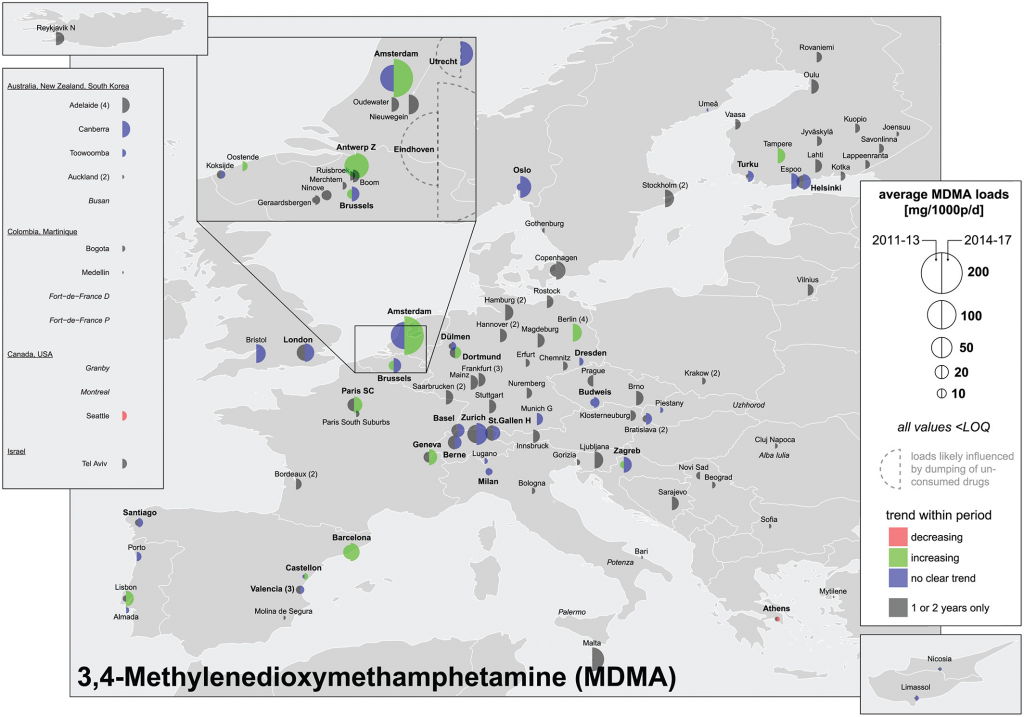 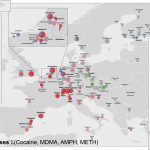 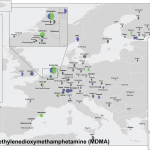 The good correspondence between drug-use figures derived from wastewater analysis on the one hand, and those from more established epidemiological indicators, like prevalence data or drug seizures, on the other, demonstrates the potential of wastewater analysis as a complementary indicator for drug-taking and trends. The wastewater-based epidemiology provides near real-time data, which enable a timelier and much faster detection of changes in patterns of illicit stimulant consumption.

In the Netherlands, KWR, as the Dutch SCORE partner, collected and analysed wastewater samples every year over 2011-2017 in the cities of Amsterdam, Utrecht and the region of Eindhoven. The key findings and trends in these cities are the following:

Drug map of the Netherlands

Wastewater research can be used as a policy instrument. It provides a picture, on a national and local scale, of total consumption of different types of drugs and the size of the national illicit drug market. This can assist in underpinning policy and in targeting the right locations. In addition, trends can be established and, through a greater monitoring frequency, the effectiveness of policy measures can be tested. In this way, the wastewater research provides information about the population’s total drug use. Research of this type therefore complements the results of population studies (information on drug users) into addiction and drug use, or the figures on drug-related incidents. Wastewater research can also throw light onto where drug-production waste is discharged, and therefore on the national geographical distribution of drug production and market size, while also providing the Water Authorities with important information about possible hazards of treatment plants.

KWR has been committed for several years, together with governments, to mapping total drug use in the Netherlands. This requires the daily analysis of the wastewater at all 327 treatment plants for a period of at least one week for a series of (illicit) drugs, such as MDMA (ecstasy), amphetamine (speed), methamphetamine (crystal meth), benzoylecgonine (cocaine) and THC-COOH (cannabis). All of this information together provides an anonymous and objective measurement of drug use by municipality or region. This constitutes the basis for the creation of a drug map of the Netherlands. 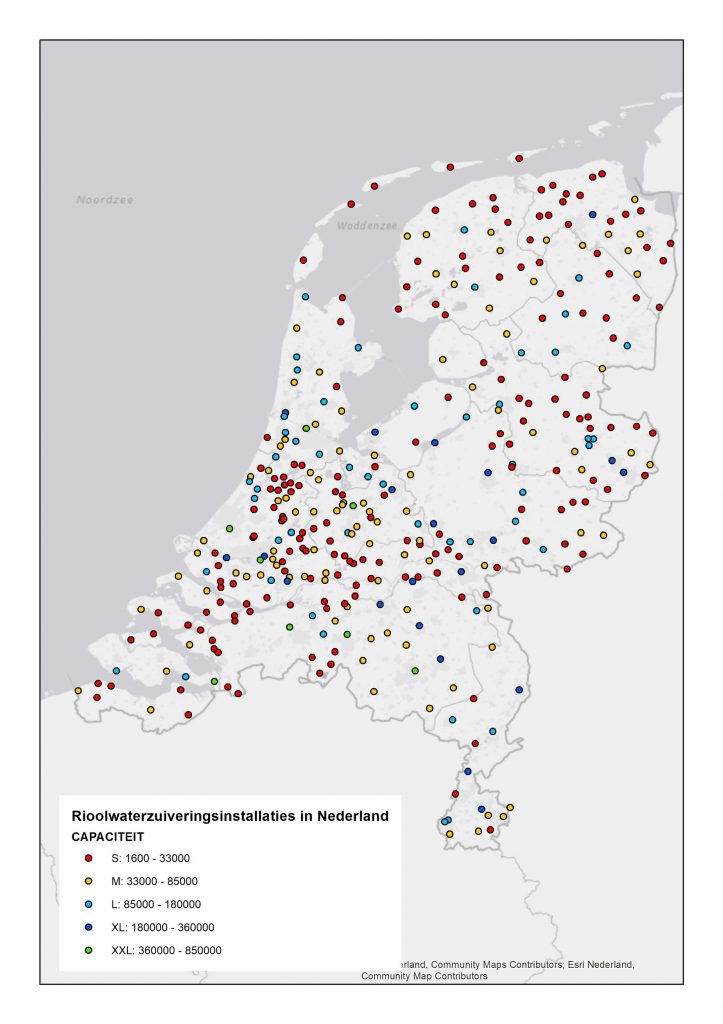 The research team for the creation of the drug map requires a broad range of expertise. Besides KWR, as an independent scientific institute, an engagement is also needed on the part of the Water Authorities and different municipal organisations (GGD, addiction care, enforcement). The involvement of important research institutes, such as Trimbos institute, NFI and CBS, is also desirable for the analyses of the results and their comparison with other information sources.

Wastewater-based epidemiology can be used for all sorts of objectives: wastewater is a ‘mirror of society’. It has for instance made it possible to establish doping by athletes, as well as the use of pharmaceuticals without prescription by the population. Alcohol, tobacco and coffee consumption can also be effectively quantified in this way. The method can be used in forensic research to ascertain illegal discharges into the sewers, for example, of drug-production waste or used oil. Health-related data can also be collected, for example, about the incidence of cancer, the presence of viruses or pathogenic bacteria, or the population’s exposure to pesticides.