Erik Emke and Pim de Voogt have won the 2016 Willem Koerselman Award for the article, ‘Spatial differences and temporal changes in illicit drug use in Europe quantified by wastewater analysis’, which was published in Addiction in 2014. The article showed that wastewater analysis, as a method for studying illicit drug use by European populations, can be applied faster and more regularly than traditional research methods, such as surveys, and offers a supplement to these methods. The research described is part of long-term Europe-wide research led by the European SCORE network.

De Voogt and Emke were not the only authors of the winning article: 23 other authors from all over Europe were also involved. In the period between the publication of the article in 2014 and 28 February 2017, the cut-off date for the 2016 Willem Koerselman Award, their article had been cited 70 times.

This is the second time that Emke and De Voogt have received the Willem Koerselman Award. They won it in 2014 as well, for an article about the pan-European drugs research – that article has been cited 145 times. The authors attribute the fact that this article has been cited so often so soon after its publication to the rapid growth of its subject area, and to the international interest in epidemiological research based on wastewater analysis.

Since 2009, KWR has conferred the annual Willem Koerselman Award to its researcher(s) whose peer-reviewed article was most cited over the preceding year (but which has not previously won the award). The award is presented by former colleague Willem Koerselman, after whom it is named. Koerselman won the first Willem Koerselman Award in 2009 for his 1996 article, ‘The vegetation N:P ratio: A new tool to detect the nature of nutrient limitation’, which was published in the Journal of Applied Ecology. That article has already been cited 941 times. 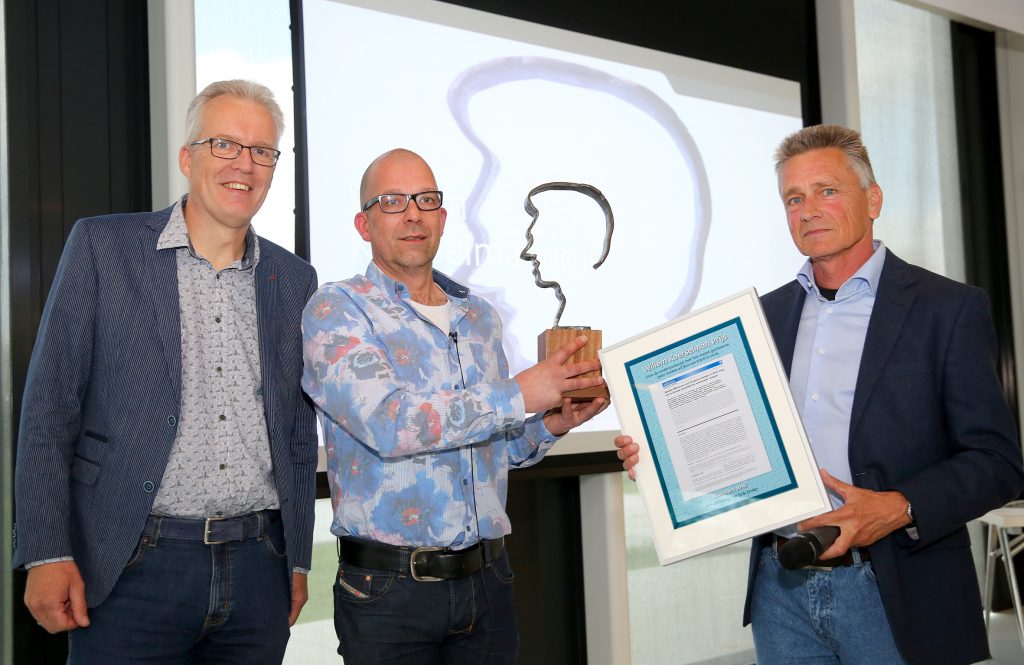 Winner Erik Emke (middle) with the award presented to him by Chief Science Officer Gertjan Medema (left), while receiving the certificate from Willem Koerselman (right), after whom the award is named.