As early as February, KWR demonstrated the connection between the number of SARS-CoV-2 viral particles in the sewage and the infection rate. This means that wastewater research has a predictive value. But how can we formulate the results even better to allow for more targeted action? By correcting the results for the number of inhabitants and for the dilution of the sewage, for instance by rainwater; by linking them better with above-ground data; and by more frequent monitoring.

Normalisation of the data

In the quest to make wastewater data more pertinent for policy-makers and governments, Gertjan Medema, Leo Heijnen, Frederic Been and their team have ‘normalised’ the analytical method for the detection of SARS-CoV-2 in wastewater. Through the parallel use of ‘CrAssphage’ (Cross Assembly phage) measurement, the researchers correct for the impact of rainfall or industrial discharges in the sewage. The SARS-Cov-2 RNA concentration is now directly related to the amount of faecal material, which provides a better indication of the incidence of SARS-CoV-2 in the population.

The graphs based on the normalised data for Utrecht and Amsterdam are presented below.

Sewage surveillance has essentially a predictive value. Medema observed this during the first and in the current wave. ‘You see at the beginning of the first and of the second wave that the rise in the number of viral particles in the sewage precedes the increase in the number of positive tests and hospitalizations. In the most recent data we see tentative signs that the circulation of the virus is decreasing. In Rotterdam we conduct measurements three times weekly, so that the trends can be signalled more quickly.’ 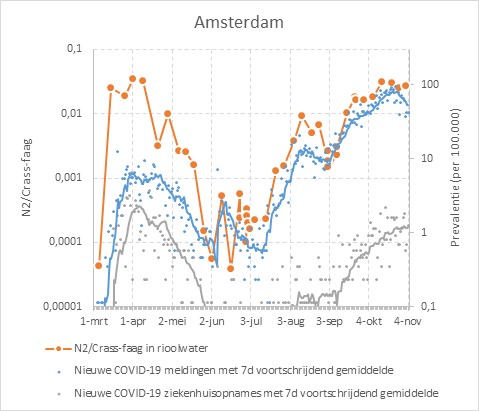 The SARS-CoV-2 concentration in wastewater (orange), the number of infections reported to the Municipal Health Authority (blue), and the number of hospitalizations (grey) in Amsterdam 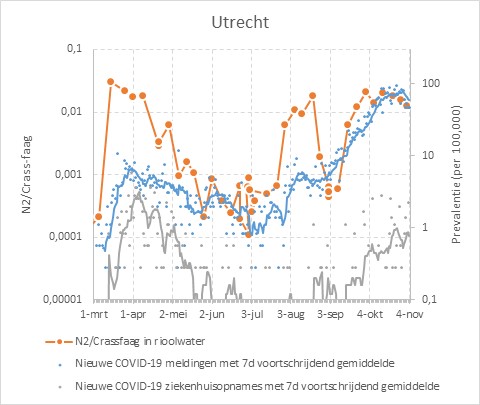 The SARS-CoV-2 concentration in wastewater (orange), the number of infections reported to the Municipal Health Authority (blue), and the number of hospitalizations (grey) in Utrecht

A second approach is to compare data from different sources and investigate which data, or data combinations, offer the most reliable information about the extent of the pandemic and the circulation of the virus in the city. This is currently being studied within a consortium in which KWR is working with ErasmusMC, GGD, doctors’ surgeries, RIVM, Water Authorities, STOWA, Partners4UrbanWater and RHDHV. This research in the Rijnmond region covers: