I Co-authored the presentation of Marc Jaxa-Rozen on how they quantified the potential savings of ATES world-wide. This work builds on my earlier work on determining the world potential for ATES. These results are now combined with the latest IPCC climate scenario’s (CMIP5), detail building energy demand in 588 urban regions around the world and adoption scenarios for ATES and BTES. The results indicate that the largest absolute energy savings can be obtained in China and North America. The largest relative contributions can be expected in Europe. 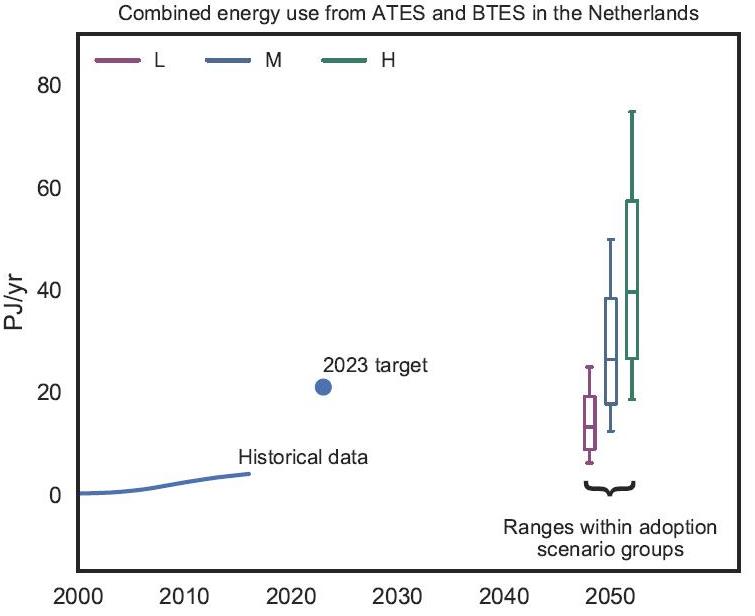 Historical data for the use of ATES and BTES energy in the Netherlands (2000-2016), compared with national target for ATES & BTES (2023), and with estimated energy savings extrapolated from the current analysis (2050). The boxplots for estimated future energy savings are grouped by maximum adoption rate.

Thermal processes in the subsurface

Like I also did the previous years, I organized the session on thermal processes in the subsurface. In this session several talks on ATES were given. High temperature ATES receives a lot of attention in Germany, given the many research occurring there. However another presenter from Karlsruhe Institute of Technology showed in his research on the historic development of ATES that HT-ATES fail in almost all cases. He Showed that of the current operating ATES systems 99.9% is low temperature. Please find the abstract of the posters and orals here:

Next to some in-depth technical sessions on geothermal I attended a general session/debate on risk free technologies to facilitate the energy transition and limit climate change. The discussion quickly focused on Carbon Capture and Storage (CCS), since the risk of applying that were considered much larger compared to the geothermal energy  technologies. It was also stated by various experts that large scale CCS is needed to stay within 2 degree climate change limit. And that development of the CCS technology is needed, both to reduce risks and increase efficiency.

A final, and in my opinion spot-on, remark of one of the panelists was that, no matter what the risks are of new technologies for saving CO2, continuing emitting CO2 is also very risky, only we don’t seem to realize that..