Researchers at KWR have quantified and clarified the potential contribution of water reuse to the freshwater system by means of Sankey flow diagrams. These show that water reuse has the potential of reducing the load on groundwater resources.

We are being confronted more and more with increasing drought damage to agriculture and nature. And the pressure is also growing on the availability of water for applications like drinking water production. To render these risks manageable, and thus safeguard the freshwater provision over the long term, strategies are being developed, among others, within the Delta Programme Plan on Freshwater Supply. One example is the local implementation of water reuse, which has the potential of contributing to a robust freshwater system by reducing the load on groundwater resources. Besides water reuse within a given sector, there are also multiple possibilities for reuse across sectors. These are for instance already being carried out on a small scale between industry and agriculture (Haaksbergen, Dinteloord, Terneuzen).

The Sankey diagrams produced by KWR visualise the freshwater system for the Netherlands and Flanders, with a focus on water streams that are influenced by humans. Researchers began by quantifying the current freshwater system and the impact of a future scenario in which economic growth and population increase result in greater water demand, while the availability of water actually decreases because of climate change. Then, focusing on water quantity, they determined the highest possible contribution the different kinds of water reuse could make to address the shortages. The study examined various examples of water reuse: reuse of highly treated household residual water in agriculture or industry; reuse of highly treated industry water in agriculture; and active infiltration of highly treated residual water for groundwater recharge. Besides these examples, there are also a variety of other possible applications and water reuses in different sectors. 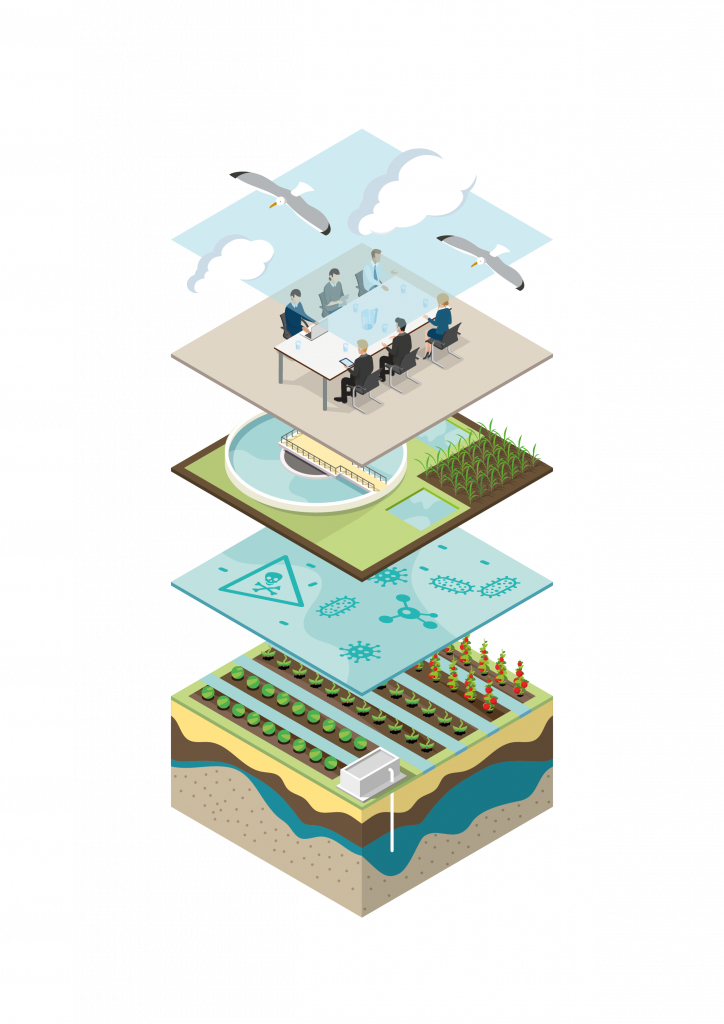 An integrated view of water reuse.

The responsible implementation of water reuse is extremely important. It demands the systematic analysis of the treatment requirements, of how to safeguard chemical and microbiological safety, of how water reuse fits in with the existing or future regulations and perceptions, and of the potential environmental consequences. KWR has developed expertises in all of these areas. This knowledge comes together within this theme: both the opportunities and risks of water reuse are clarified.

The analysis of the Sankey flow diagrams shows that whenever water reuse is applied, it has the potential of considerably reducing the load on the groundwater resources. Particularly the creation of new connections between sectors presents opportunities. The method used clearly reveals the connections in a regional freshwater system, and supports stakeholders in identifying possible collaborations. It also reveals the problem areas concerning water quality. A next step would be to create a dynamic model for the distribution and the supply of water in space and time, as well as to develop a method to deal systematically with and interconnect the non-quantitative aspects.

Connection between sectors in the water system.