The most valuable and at the same time least known part of our drinking water supply system is the buried transport and distribution infrastructure. Once the pipes are covered by soil after installation, they are out of sight, and no direct evidence of their state or condition is available. In addition to ways of estimating the condition of pipes, there are several ways of determining their condition through the application of inspection technologies. We have developed an elaborate test network for inspection-tool testing in particular, but which is also generally suited to many types of research concerning drinking water distribution.

The most valuable and at the same time least known part of our drinking water supply systems is the buried transport and distribution infrastructure. Once the pipes are covered by soil after installation, they are out of sight, and no direct evidence of their state or condition is available. However, the aging of this infrastructure, reported distribution losses in different parts of the world (averaging 30% globally, with large regional variations), and limited financial resources beg for ways to prioritize the reparation, rehabilitation or replacement of pipes based on their condition. The ultimate goal would be to repair, rehabilitate or replace a pipe at the moment it is about to fail, preventing both the nuisance of the failure itself and the waste of financial resources associated with premature action.

It is possible to determine the condition of pipes by applying inspection technologies. These methods provide helpful and actionable information on the condition of pipes and the presence of leaks, but their application is generally intrusive and costly. Autonomous inspection robots have been proposed as an alternative to intrusive inspection technologies for drinking water distribution systems. By ‘living’ in these networks they can inspect much longer pipe trajectories without interruption of the water supply or the risk of introducing contaminants in the water. Such a robotic system has been under development in the AIR (Autonomous Inspection Robot) project, in a partnership of seven Dutch drinking water utilities (Brabant Water, Dunea, Evides, PWN, Vitens, WMD, WML), KWR Water Research Institute and the mechatronics company Demcon. 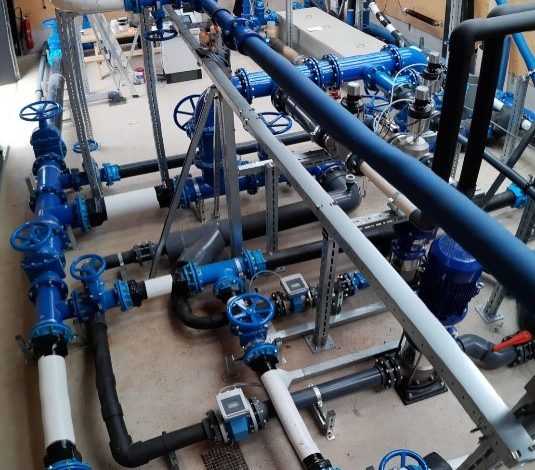 In this project, we have designed and built a test network that is to a large degree representative of real-life Dutch drinking water networks. It was designed with inspection-tool testing in mind, and AIR autonomous inspection robots in particular. We have therefore included as many challenging situations in the network as possible; situations that can be reasonably expected in real-world networks. The network was built by technicians of the Dunea, Brabant Water, PWN, and Vitens water utilities, each bringing their own way of working and preferred materials.

This has resulted in a network that is not only extremely suitable for inspection-tool testing – including AIR as launching customer – but also for various types of drinking water distribution research. This includes research on topics such as discoloration, biofilm growth, sensor deployment, contaminant transport and dispersion, etc. KWR is very much open to collaboration with interested parties on these and other subjects.