Several water utilities are exploring the possibilities of Augmented Reality and Virtual Reality. We have long known that a picture is worth a thousand words. Modern visualisation techniques should make it possible, with specific applications, to better serve particular target groups. At this year’s fourth knowledge exchange meeting of the Hydroinformatics Platform, which was held on 24 November, AR and VR techniques were placed in the spotlight. The participants spoke of their utilities’ initial experiences and about what is and what is not possible with the applications. As the water sector, we are taking our first steps into the world of AR and VR, and we have caught a glimpse of the possibilities.

Data visualisation can assist water utilities in their operational management, stakeholder consultations and strategic decision-making. It allows for the effective translation of complex and extensive data streams. One possibility is the digital projection of information onto the real world, that is, in the form of Augmented Reality (AR). We already have such applications in our daily lives; an example is Google’s Street View functionality (launched in 2009), which makes it possible for people to see supplementary information in the street view on their phones. People are also increasingly using smart functionalities on mobile devices, such as Alexa and Siri. Virtual Reality (VR) goes a step further, immersing the user in an entirely virtual world, similar to reality or indeed totally different from it. So far VR applications are found principally in the entertainment and games industry.

Besides these examples, the applications of both AR and VR are also conceivable for the water sector. For example, AR could assist the work of maintenance engineers through the visualisation of information about the location and function of assets. Moreover, personnel can be trained in a VR environment. The possible applications of AR and VR for the water utilities were discussed during this year’s fourth knowledge exchange meeting of the Hydroinformatics Platform. The experiences shared ranged from playful testing to actual implementation. Potential applications were also explored, as were all the elements involved in the use of this technology.

Digital Twin of the subsurface

In the afternoon’s first contribution, Jan-Willem Moerman spoke of Waternet’s experience in the development of a Digital Twin of the subsurface. The project’s goal was to incorporate the utility’s assets into a 3D viewer, thus improving their visibility for consultation by members of Waternet’s staff. Designs of the wastewater and drinking water network, information about monitoring wells and data from BIM360 can for example be incorporated into the viewer, but so too can data from external parties, such as the soil data set of the municipality of Amsterdam. At the centre of the project was the 3D representation of the available 2D data from Waternet’s entire supply area.

What this pilot project demonstrated is that the conversion of 2D information into 3D provides lots of food for thought. To begin with, the 3D representation gives a clearer view of the data’s quality, or lack thereof. A 3D representation also offers asset managers an entirely different perspective on the assets and their environment. This helps improve their grasp of complex situations. It was also noticed that 3D visualisation creates a sense of extreme precision, while in reality the precision is not determined by the visualisation but by the data. This underscores the importance of optimal data quality.

The project was carried out by six students from the University of Applied Sciences Utrecht within a Geo3D team, which was specially created for the task. Two of these students, who now are working part-time at Waternet, are continuing with the work together with a few Waternetters. The objective is to transition from the 3D representation in the web browser to an actual Augmented Reality representation on portable devices.

The second afternoon contribution was by Hans Tan (Brabant Water), who discussed the experience of learning to work with AR and VR, and explained three different applications. The first concerned the use of Virtual Reality in the design phase of a new production location. Using a 3D model, different prototypes were compared for the purpose of optimising the placement and accessibility of the components. The model was also used at the construction site to provide supplementary documentation to the classical construction blueprints (see photo). Lastly, the model will probably be used in regular operations for the training of operators, and in maintenance and management activities. In this regard, it is crucially important that the underlying data be well maintained. 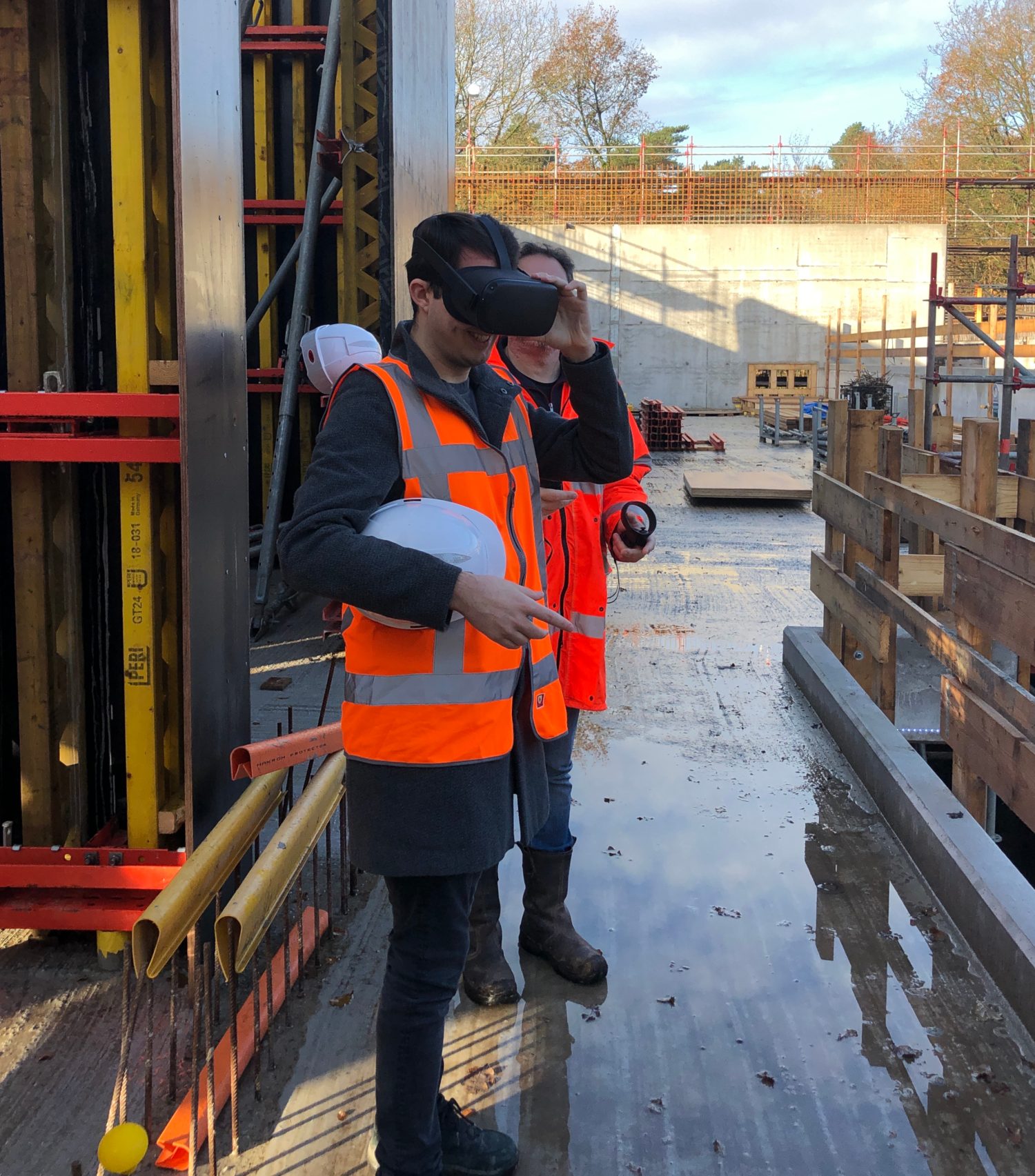 Another Brabant Water application that was briefly explained involved an app with which colleagues are able to walk virtually around the office to look at any modifications, for instance those made in connection with corona measures. The app was developed on the Fectar platform. Brabant Water also developed a walking app. The routes can be walked following the instructions on the phone, thus avoiding the need for signage in the field. One of the app’s benefits is that it is easy to modify the routes, for example, whenever too many people make use of them. Information can also be added to the route, about nature management for example.

In his presentation, Hedwig van Berlo from WML talked about ‘HOLA’ (the Dutch acronym for Hololens Buried Mains App). The WML Innovation Lab created an experimental space to work on staff members’ innovative ideas. In 2018, this resulted in a project on the use of ‘mixed reality’ in the visualisation of buried pipe objects. An investigation was done into whether AR could be used to this end, which would render trench excavation unnecessary. This led to a prototype which makes it possible for a field technician on the surface to see – by means of a ‘hololens’ – the location, age and diameter of the pipes, as well as the material they are made of.

Several user-tests were run with this application. Although WML is proud of what has been accomplished with limited resources, a variety of snags still remain. In particular, determining the location in the field on the basis of the GPS was not precise enough to reliably pinpoint the location of the assets. But the project was able to offer a glimpse into what will become possible in the future, even if implementation in daily practice will still have to wait a few years. 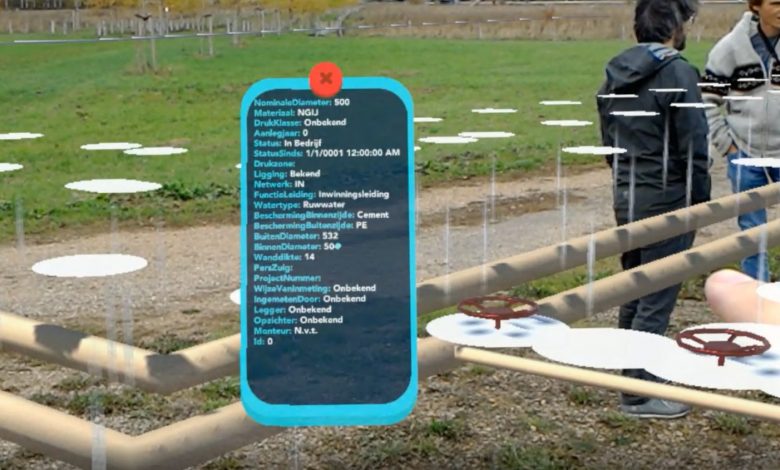 Water mains projection and attribute data through the ‘hololens’ (WML).

With his ‘visualisation visions’, Peter van Thienen (KWR) shared some afterthoughts with the meeting’s participants. What can we at this point already do in the water sector with modern visualisation techniques, and what would we like from them even if the time is not yet ripe?

It is important to optimise the effectiveness of the visualisations. This has to do with the availability of the right information at the right moment. While the projections are now still linked to a screen, a computer or an AR or VR headset, developments are underway which might make it possible to actually show 3D images in space – so-called ‘volumetric display’. Another option is to completely skip the senses, and to send the information to brains using a direct interface. Pie in the sky? Maybe not, when you consider the possibility of using a cochlear implant to help people with a damaged auditory nerve.