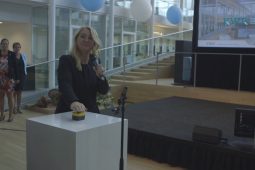 The official opening of the new KWR building.

More about the building

The circular economy as social contract

Society in large portions of the world is in transition; partly under the pressure of specific socio-economic factors, partly because of the deplorable condition of the environment. As far as the latter is concerned, we face an immense challenge: the Earth system risks losing its geological equilibrium and major societal change – a transition – is needed to re-establish the equilibrium. This is no simple task, because society, if only because of the magnitude of the problems, will have to tackle it in a concerted manner – not likely at a time when it is embroiled in turbulent transitions in other areas.

I think that whatever the solution, and whatever the conditions, we must feel responsible, as individuals, for a collective sustainability undertaking. In the first instance, this requires what Jean-Jacques Rousseau called a contrat social, or social contract. His conviction was that, within an individually-entered social contract, a person surrenders individual freedom of choice for the sake of a public good. You could say that an individual thereby promotes him or herself from a state of a social solitary to that of an engaged citizen. It’s not hard to see that such a contract should actually also apply to companies, institutions and governments; part of the expression of the general will to make society more sustainable. The role of a knowledge institute is to be part of the social fabric which connects various parties at the level of knowledge, competences and implementation, thus creating the prospect of and support for sustainable solutions.

KWR functions increasingly as a strategic instrument of the water sector: we work on a knowledge-intensive circular economy, create an international forum for water companies and water professionals, and frequently form, together with our own sector, a strategic knowledge interface between government and citizens. We’re aware that knowledge yields the most for society when it is produced with a chain perspective: knowledge (research), skills (competences) and market (valorisation). Our task is to produce knowledge and, in parallel, to convert it into competences for humans and organisations, and then to draw out the resulting best practices (solutions) and help introduce them as references to the market. Knowledge as the fulcrum between problem and solution, between public and private, and between science and citizen. By accepting responsibility for a more sustainable watercycle, we also do so for a more sustainable society. As a public knowledge institute we feel bound to this contrat social.

In this context, 2015 was a highly productive year for us. The annual report collects the year’s highlights and I hope that you read of them with pleasure and approval.