The aim of this project is to determine how low manganese concentrations in drinking water affect the formation of biofilm in the distribution system. Biofilm in drinking water with and without manganese will be monitored. The study is part of the broader research effort looking at the effects of low manganese concentrations in clean water during transport through the distribution system.

Brabant Water is therefore studying the effect of low concentrations of manganese on particle formation, composition and behaviour. In addition, the study will look at the effect of manganese on biofilm formation. That will include the effect of chlorine, which is used for disinfection in most countries. Here, the expectation is that the manganese will not be oxidised by the biofilm but by the chlorine.

Determination and monitoring of biofilm formation

To determine the role of low concentrations of manganese in drinking water on biofilm formation in the distribution system, the extent of formation is being quantified experimentally using biofilm monitors.

Two biofilm monitors will be installed in a parallel set-up (pilot A and pilot B) supplied with clean water from the Welschap water production company (Figure 1). The supply to pilot A will contain manganese and/or chlorine, which will not be the case in pilot B (reference/control). 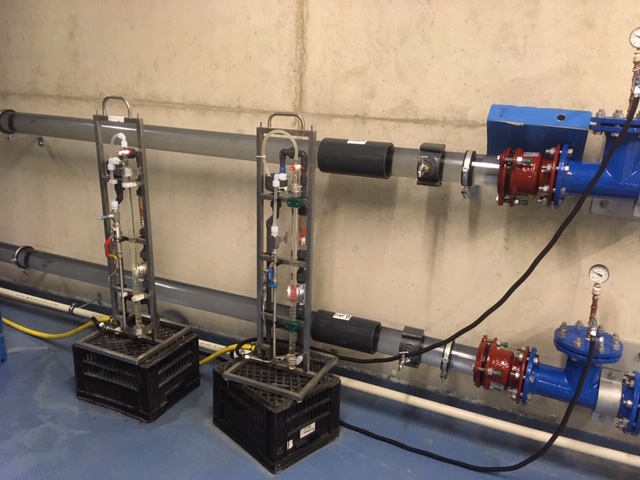 Overview of the project set-up for testing the role of manganese. Chlorine was being passed through the system when the photo was taken.