Since regrowth of microorganisms in the water distribution system is not desirable, the Dutch water companies strive to produce drinking water with a low microbial growth potential. In order to determine this growth potential, the biomass production potential (BPP) test was developed within the Dutch water sector’s joint research programme (BTO). The test provides a more complete picture of the growth potential of drinking water than does the traditional AOC method. In this project, in preparation for its large-scale utilisation, we further validated and standardised the BPP test. 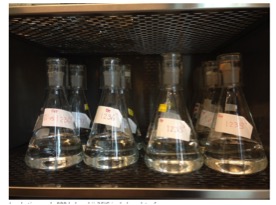 Incubation of the BPP flasks at 25°C in the incubator

We validated the growth yield of the BPP test by adding known concentrations of acetate to different water types, and determining the maximum ATP concentration over the first seven days (BP7) following incubation at 25⁰C. The BP7 results were then used to determine the growth yield of microorganisms on acetate in the different water types, and comparing them with previously measured growth yields. We also studied the extent to which the standard addition of a river water inoculant and/or an activated carbon filtrate inoculant is required in the BPP test.

BPP test is suitable for large-scale utilisation and implementation

The validation results show that the growth yield of microorganisms on acetate added to drinking water differs according to water type. It is thus more reliable to directly report the BPP results rather than first recalculate them in terms of an AOC concentration.

Supplementary standardisation research has demonstrated that no inoculant needs to be added to the BPP test as a standard practice. But whenever (drinking) water is directly analysed after a treatment step, in which microorganisms are killed or removed (e.g., ozone UV, UV/H2O2, membrane filtration), it is necessary to add an inoculant from the same treatment.

With this supplementary validation and standardisation, the BPP test is suitable for large-scale utilisation and implementation at the drinking water laboratories, whereby the ATP concentration is determined according to NEN-EN 16421:2014.