Drinking water in the Netherlands is treated to high quality standards and then delivered to customers through the underground distribution system. The distribution system consists of trunk mains, distribution mains and connection pipes. The trunk mains are the largest and transport the water from the treatment and storage location to residential areas and companies. The distribution mains then divide the water among the residents. The connection pipes convey the drinking water to individual homes and companies where it is used. To illustrate, the average person in the Netherlands consumes about 120 litres per day at home.

Drinking water and temperature: not too cold, not too warm, but just right

According to the climate scenarios of the KNMI (Royal Netherlands Meteorological Institute), around 2030 the average summer temperature will be 1˚C warmer than under the current climate (1981to 2010, inclusive). Around 2050, the average summer temperature will be between 1 and 2.3 ˚C warmer than today; while around 2085 it will even be between 1.2 and 3.7 ˚C warmer. For purposes of comparison, the summer of 2018 was 1.9 ˚C above normal. As the summers become warmer, so too will the ground. KWR studies have shown that hotspots – i.e., locations that are warmer than average – can be identified in the water distribution system. For instance, locations that are always exposed directly to the sun, or are under asphalt, or are in the vicinity of heat sources, such as heat networks. In these hotspots there is a risk that the drinking water temperature will occasionally rise above 25˚C. This occurs under the current climate on an incidental basis, at the most; but around 2050 and thereafter it could happen for several weeks every year. Potential additional hotspots will also arise due to developments related to the energy transition. The subsurface is becoming increasingly full of electrical cables, heat networks, ATES installations, all of which increase the chance that the temperature of drinking water in any pipes sufficiently close by will be affected. This is not desirable and preventive measures are called for.

Water mains last for many decades. To avoid problems, it is therefore important to start implementing solutions as soon as possible. With regard to excessively warm drinking water, the solution is to prevent new hotspots. KWR has studied the effectiveness of different measures to this end. A sufficient distance from the heat source is important; KWR and Deltares are currently researching the minimum distance required. Shading by buildings and by vegetation is effective – the latter particularly so, because it removes heat from the air through evaporation and keeps the soil moist. The deeper installation of pipes is an option, though an expensive one. Other measures only have a local impact, for instance, insulating or cooling the drinking water.

The measures involve tailored work and the water utilities cannot achieve the task alone, particularly since many of the measures mentioned actually fall under the responsibility of other stakeholders active in the surface and subsurface space. To address flooding and heat stress, many municipalities are now thinking about greening their neighbourhoods. If we incorporate the objective of sustainable and wholesome drinking water immediately in the planning, then we create win-win situations. It would therefore be good to include drinking water temperature as part of the municipalities’ sustainability visions. 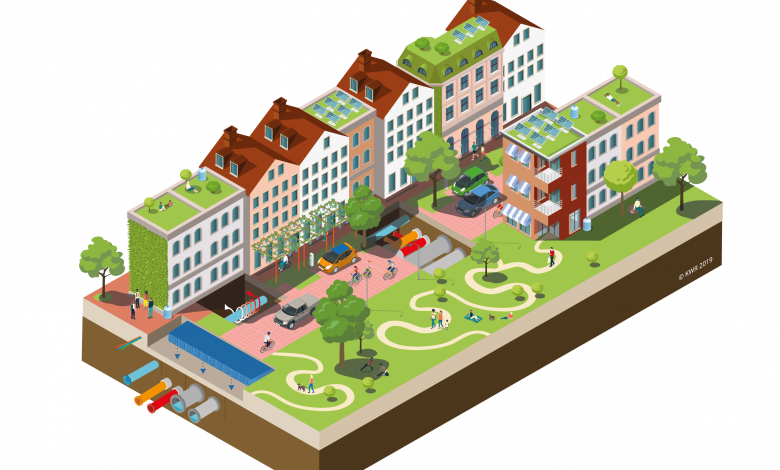 KWR has studied the effectiveness of different measures to this end. A sufficient distance from the heat source is important.