From 8-10 April I visited Hong Kong together with Idsart Dijkstra, Water Systems and Technology manager, and Prof. Merle de Kreuk of TU Delft. Merle and I were invited by the Consulate General of the Netherlands. On 9 April, during the ‘Dutch month’, we took part in the Building Resilience through Sustainable Urban Water Management event, where we spoke respectively about wastewater treatment and drinking water distribution in the Netherlands. There were over 100 participants from the public services for drinking water, wastewater and the environment, as well as several academics and consultants. It was an interesting meeting, with presentations related to Hong Kong and the Netherlands, as well as panel discussions about the next steps for Hong Kong, and we also met a large number of people.  During the dinner offered by the consulate for a select group, we had the opportunity to talk to the key people in the public services and from Hong Kong University of Science and Technology (HKUST).

The invitation came at an opportune moment, because KWR had already made contact with the city’s water utility (WSD, water supplies department), a local consultant and HKUST. WSD is very interested in our low water loss levels, in our experience with drinking water distribution without mountains to ensure high pressure, and in so-called ‘smart networks’. 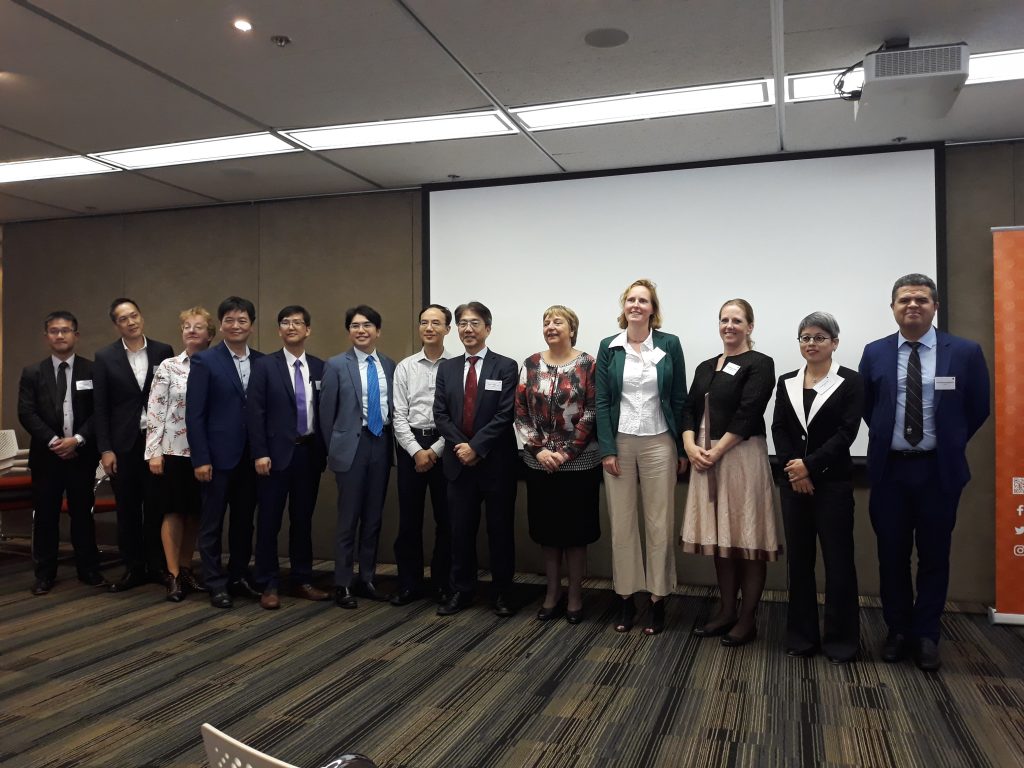 The Dutch consul, speakers and panel members at the Water Event on 9 April.

KWR will be advising the consultant in a recently launched project on a water-quality problem at WSD. HKUST is doing significant basic research into a leak detection technique that could, in the future, be incorporated into Dutch inspection modules. It was great to have direct contact with these people – rather than only by e-mail or poor Skype connections – and also to see and talk to them in their home setting.

Hong Kong has a population of 7.4 million people who live on a surface area of 30 by 30 km, of which only 20% can be used for habitation: the remaining surface is either water or mountains. The city has a huge number of residential high-rises which contain very many small apartments. Housing costs are extremely high, so that it is not a simple matter for young people to be able to afford a place of their own.

Government revenues in Hong Kong rely for the most part on the high land prices, while income tax rates are very low, and drinking water rates do not even cover the operational costs of distributing it. The society functions well and is highly technological. As long as the population continues to grow along with land prices, the possibility of investing in the drinking water and wastewater infrastructures remains. Between 2000 and 2015, for instance, over 3000 km of drinking water mains (40% of the total) were replaced. This initiative cut back water losses from 25 to 15%, and the city aims to reduce this figure even more.

We attempted to reconstruct what the supplied drinking water is used for. One-quarter seems to be consumed in households, 15% (or perhaps much more?) is lost, and the remainder is used in commercial activities, with the numerous eateries and restaurants probably accounting for most of this consumption. A clearer picture of the consumption could reveal opportunities for water savings and the use of treated wastewater for drinking water production.

The various discussions indicated that the water utility (WSD) every day faces a very big challenge in continuing to meet the requirements. The very busy streets can’t be dug up, and citizens are becoming more vocal. This creates a context in which more and more attention is being directed at risks. We see opportunities for the application of knowledge and experience from the Dutch water sector to the situation in Hong Kong: a number of our tools and models could bridge the gap between theory and practice in the city. In view of Hong Kong’s growing population, this is an important challenge.

Apart from the improvement of the current infrastructure, there are also possibilities in Hong Kong for the installation of new infrastructure differently. There are big plans to drain another 1700 ha to provide living space for a further one million people in the city. WSD would like to explore how a smart network, with low water losses, could be installed in the area, and how water could be reliably supplied using the pressure from pumps rather than depending on mountain elevation.  Perhaps a showcase for Asia?

On the final day of our stay, we checked out the test mains network at HKUST and had initial talks with the consultant. All very informative. In the evening, we paid a visit to an important sponsor of a great deal of research (and even of entire universities): the horse races. Naturally, we need to bridge the cultural differences, but we have good prospects for concrete agreements for interesting research in and for this still expanding metropolis.