On 25 January Professor Willy Verstraete was appointed KWR Honorary Fellow. KWR bestowed Verstraete the Honorary Fellowship in recognition of his great contributions to research into microbial processes and to responsible resource and environmental management. He is a tireless activator and inspirer in the field of resource recovery and, despite his retirement in 2011, has remained fully active both in and beyond his field of expertise. Among other things, he was one of the initiators of KWR’s Resource Recovery line of research. The collaboration between Verstraete and KWR is still growing: spin-off company Avecom and Allied Waters are currently developing a new project on protein for human consumption.

As a visiting professor on Resource Recovery at KWR since 2013, Verstraete was one of the initiators of KWR’s Resource Recovery line of research. He is also the spiritual father of Power-to-Protein: the biosynthesis of proteins by microorganisms, which extract raw materials and energy from waste streams. Within KWR’s BTO-WiCE programme, he is one of the driving forces behind the Resource Efficiency research theme. Verstraete was also closely involved in the first IWA-KWR Global Award on Resource Recovery, which was presented during an IWA Congress in Ghent in 2015. And last, but not least: working with Verstraete is immensely pleasurable because of his inspiring ideas, strong commitment and sparkling energy.

Verstraete was born in 1946. He has been associated with Ghent University since 1971, and in 1979 was appointed professor in the university’s Center for Microbial Ecology and Technology. Since his retirement in 2011, his activities have included the chairmanship of the IWA Cluster on Resource Recovery (2013-2017), and active membership on assessment committees of several (including Dutch) scientific programmes and in Ghent University spin-off companies. His appointment as KWR Honorary Fellow is certainly not intended as a conclusion to his collaboration with KWR: indeed, the ties will become even stronger, thanks to a new collaboration on proteins via the spin-off company Avecom and Allied Waters, which will focus on protein for human consumption.

Over the past few years, KWR has acquired an impressive and conspicuous position in the field of applied research into the watercycle. During this growth process, the commitment, the decisiveness and the support of certain individuals for KWR, and for the joint watercycle research programme, have been of vital importance. These individuals include managers, supervisors or proprietors from KWR circles, but also people from the institute’s wider national and international networks. Verstraete is KWR’s third Honorary Fellow, following Martien den Blanken and Joan Rose. 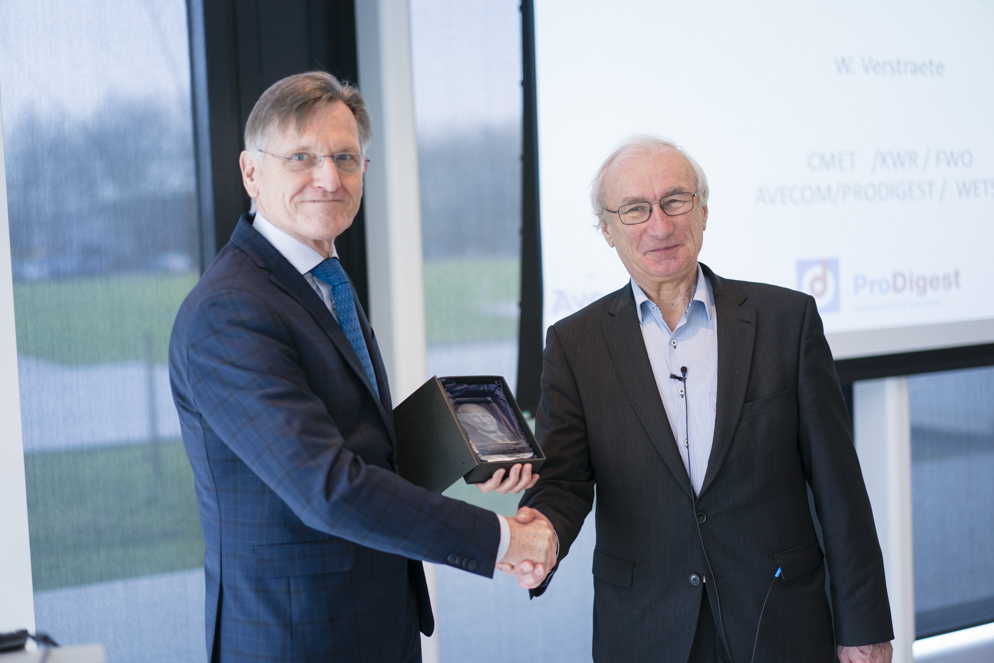