Storage and conversion are becoming increasingly important for a robust and reliable energy system of the future. These are provided by the Power-to-X concept, which involves the conversion of sustainable power into hydrogen and heat for storage and use in other applications. Together with its partners, KWR has over the last two years further developed the Power-to-X concept with a view to its realisation. The results of this work are presented in the report on the system’s design: Solar Power to the People: Systeemontwerp Power-to-X (in Dutch).

The Power-to-X project is co-funded by the Water in de Circulaire Economie (WiCE) programme within the Joint Research Programme of KWR with the water utilities, and the RVO (TKI Urban Energy). The project partners are Allied Waters, TU Delft, PitPoint and Aveco de Bondt.

Energy system of the future

What will our future energy system look like? Before answering this question, we still need to make substantial progress in developing demand for sustainable energy. Fortunately, this is happening at an accelerated pace. For a number of reasons it is important that part of the sustainable power be converted into other energy carriers. After all, the generation pattern of solar and wind energy is not continuous; electricity cannot fill all energy supply needs; and connecting solar and wind parks to the power grid has its limitations. With the aim of making this desired conversion smartly, for both heat and hydrogen, knowledge was developed over the last two years in the ‘Systeemontwerp Power-to-X’ (SPX) project.

The Power-to-X concept combines the generation of sustainable (solar and wind) power with its conversion to and storage as hydrogen and heat. The harvest, storage and use of rainwater are also part of the project. The concept was elaborated earlier and its feasibility explored. Among the outcomes of that initiative was the publication of a book, Solar Power to the People, which presents a vision of the energy system of the future.

Over the last two years the Power-to-X concept has been further studied, with a particular focus on its realisation in Nieuwegein. The concept aims to combine direct current, heat production, storage, and demand, and hydrogen production and purchase, so that a maximum number of interconnections can be established. Each of these parts has been the subject of reports, and they are also addressed in an overarching and summary report: Solar Power to the People: Systeemontwerp Power-to-X. 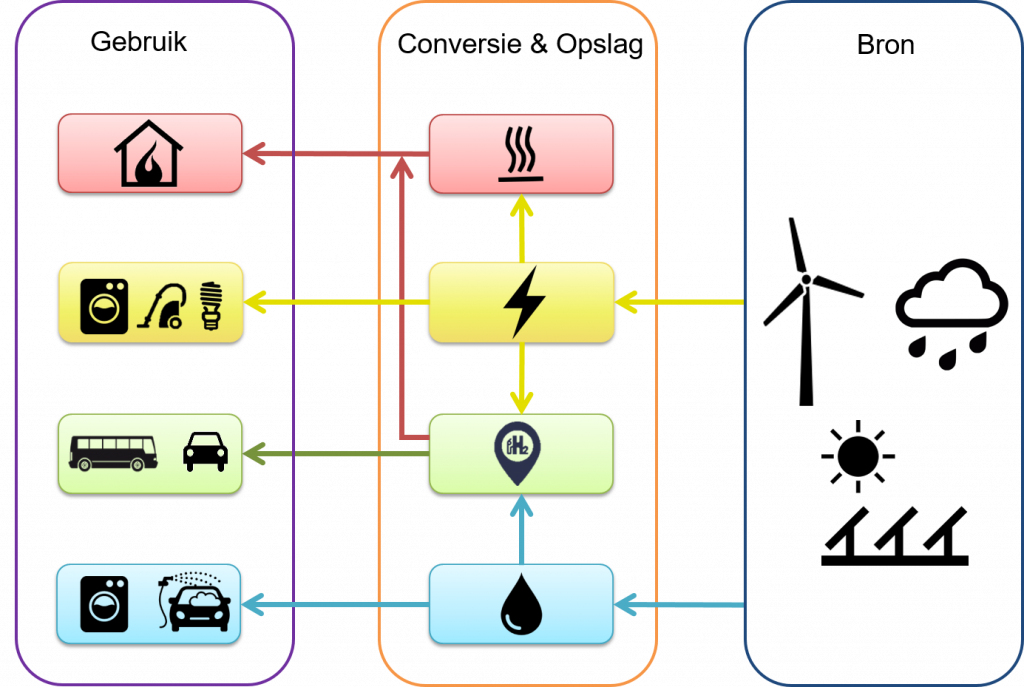 Schematic overview of the Power-to-X concept.

Modelling with the Power-to-X model produced an integrated approach to applications with heat storage, hydrogen and direct current. Each of these applications was also examined separately.

With regard to heat storage, the Nieuwegein research aimed to use a heat pump to produce as much heat as possible in the summer from surplus solar energy. Surface water provided the heat source in this instance. The heat produced is stored at 50 or 65˚C, with a view to supplying households in the Rijnhuizen neighbourhood in the winter with heat at 40 or 50˚C. All that is then required are small booster heat pumps for tapwater production, with a power of ca. 0.5 kWel, instead of heat pumps of far greater electric power capacity. On the basis of the current knowledge, it is recommended that in Nieuwegein the first aquifer be used for heat storage at 40˚C. The research results relate to this specific case, but the principle certainly applies more widely. 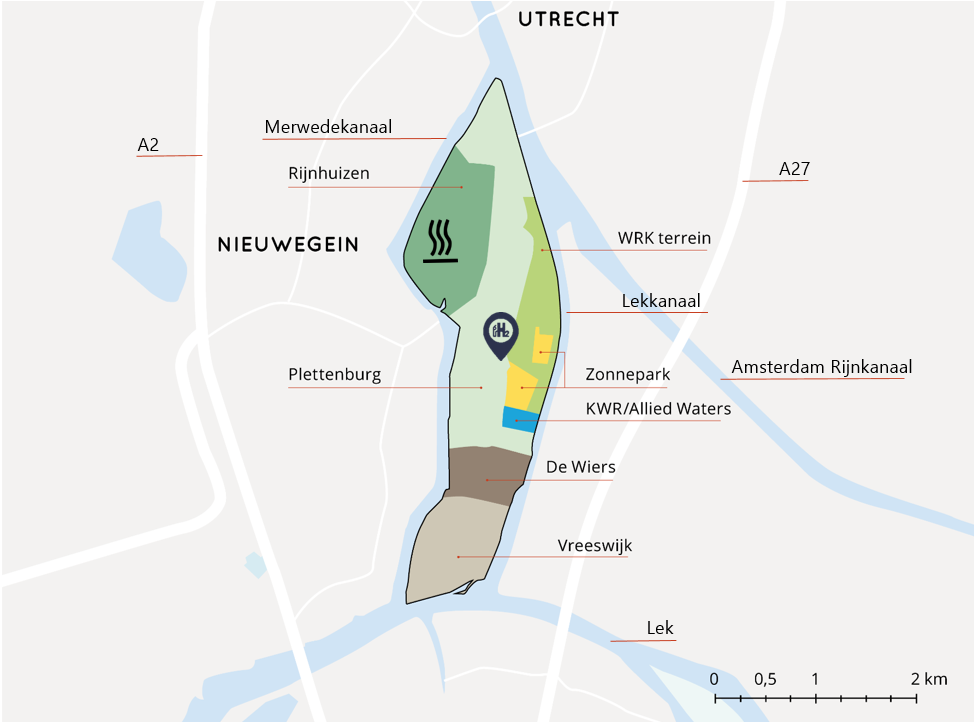 With regard to hydrogen, there is a growing demand for zero-emission transport, as exemplified by the interest of the contracting company Jos Scholman. Inland shipping is also interested in making use of hydrogen. The planned hydrogen production in Nieuwegein, using a 2MW electrolyser, amounts to ca. 250 tonnes per year, at a cost that is practicable for mobility purposes. Waternet’s solar park, after meeting the utility’s own needs, does not produce enough electricity for a profitable production of hydrogen. Additional use of power from the grid would be needed.

Different designs schemes were produced for direct current and alternating current. These showed that a direct current system offers an energy saving of up to 10%. It furthermore involves a possible saving on equipment costs since it requires fewer converters.

The system’s integrated approach using modelling also included an economic assessment and study of the possible addition of three wind turbines to the solar park. In this case, the Power-to-X system, assuming a constant grid capacity of 13 GWh, can avoid curtailment and use the energy for other useful applications.

The project is special in that, besides its research component, work is also being done on realising parts of the concept. First of all, the entire Waternet solar park was set up, consisting of one section of 3.8 MWp and another of 5.5 MWp. 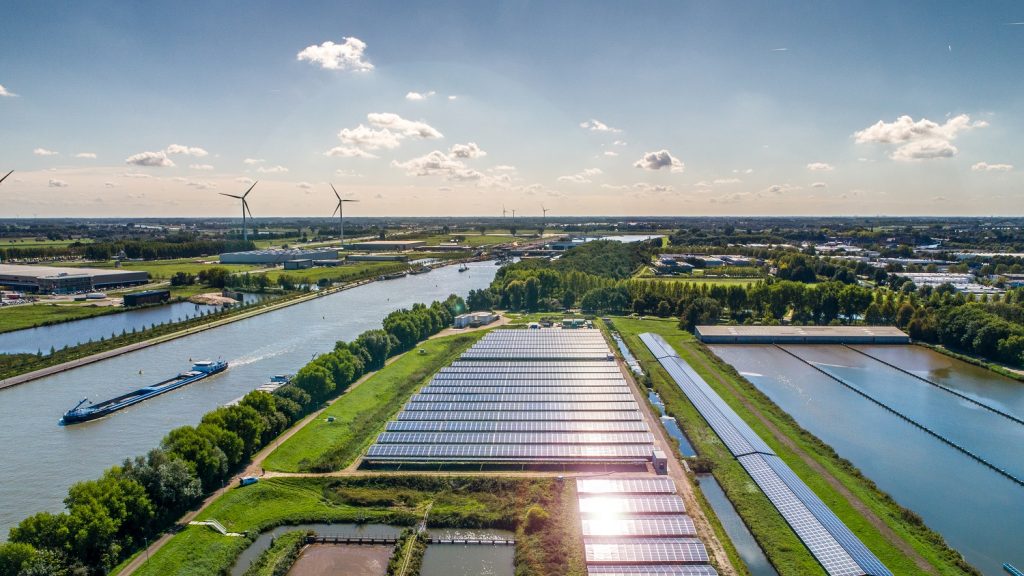 The first section of Waternet’s solar park at the WRK site.

In addition, several discussions were held with stakeholders about the heat component of the concept. In the end, a decision was made to stop the development of a heat network for the Rijnhuizen neighbourhood. An important reason for this is that the municipality, as a non-proprietor of the land, cannot propose the concept to project developers. Although there is certainly a willingness on the part of both stakeholders, it is difficult to get a business case for a heat network off the ground. The project development times of the large number of developers involved are too varied, which produces a risk build-up for the heating company. The possibilities of using the heat elsewhere in Nieuwegein, or of realising the concept some other place, are currently being studied.

There are many ongoing developments concerning hydrogen. Here, too, we notice that the licence application process for hydrogen installations requires a lot of effort and attention, because of its novelty to all of those involved. Licensing authorities have to become familiar with the material, and hopefully this project has made a contribution in this regard. An acceleration of the sustainability drive requires a licensing process that runs smoothly. So far, all the efforts made have certainly produced good results. Project partner Allied Waters, together with the contracting company Jos Scholman, has established the new company Hysolar. A temporary hydrogen filling station has been set up at KWR’s site. And there are concrete plans for future hydrogen production and a larger hydrogen filling station. 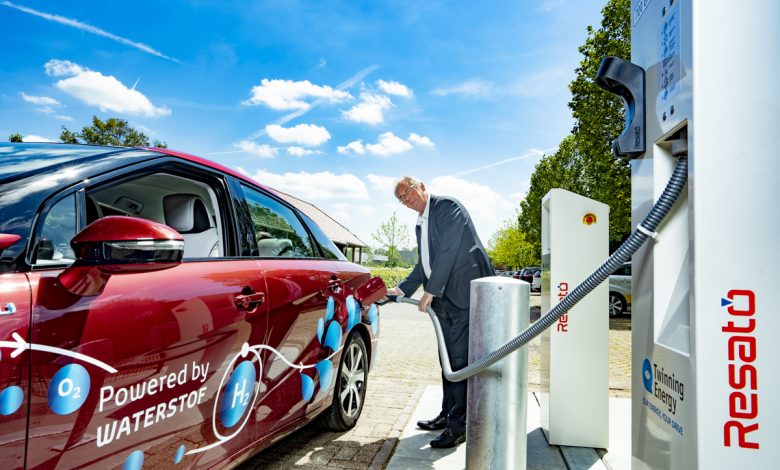 Power-to-X cases have been elaborated within the Joint Research Programme’s WiCE programme, dealing with energy storage and hydrogen at a production site (PWN) and a pumping station (WMD). These studies show that an entirely off-grid pumping station is not very realistic, but that hydrogen certainly offers prospects in the case of a grid connection that is too small. The challenge is to match production and demand.

An inventory was also conducted within the Joint Research Programme of alternatives to diesel-based emergency power supply, for which hydrogen at the moment offers an overly costly and voluminous solution. Lastly, a workshop was organised to share and discuss the results of the SPX project as well as the above cases. It was apparent during the work sessions that the water utilities are certainly keen on becoming involved in the energy transition, but that they also require more knowledge before moving in this direction. A great deal of caution also exists when it comes to the protection of drinking water sources. It is moreover striking that water utilities are not yet involved, for instance, in the Regional Energy Strategies, while the Water Authorities are. KWR’s objective is to use Power-to-X and future research projects to support the water sector in its quest for a role in the energy transition.