Working within the joint research programme for the water companies, KWR researchers designed and built a scale model of Leeuwarden’s water distribution network. On 26 November, the scale model was officially handed over to Vitens. It is to be used, among other things, to gain insight into the processes that influence drinking water quality and to test water quality sensors in real time. 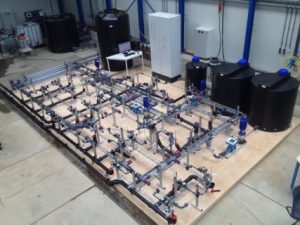 The Vitens water company is actively working on innovations of the subsurface distribution network, and researching the optimal use of real-time sensors with which to monitor water quality and detect leakages. In this context, Vitens and KWR researchers developed and built a scale model, measuring 8 by 4 meters, which is a scientifically based reflection of the distribution network of the city of Leeuwarden. In order to obtain an optimal similitude between the processes occurring subsurface and in the scale model, the actual pipe lengths were reduced by a factor of about 1,000 in the model and the pipe diameters by a factor of 10. In the scale model everything occurs about 900 times faster than in the ‘real’ world subsurface.

This scale model represents an important research tool that offers a wide degree of experimental freedom and the opportunity to test sensors in a practical environment. It constitutes an important addition to the current research options, such as research into the actual distribution network – in the Vitens Innovation Playground among others – and numerical modelling, for which KWR has developed various algorithms and programs. Even if the scale model is situated in Noordburgum at Vitens, the company also wants to make it available for research with other partners and water companies.