In the Netherlands low-productive habitat types have for decades been affected by high nitrogen deposition. Nitrogen-mitigation measures have been taken to maintain and restore these low-productive habitat types. This project, within the Joint Research Programme of KWR with the water utilities, studied the effectiveness of two frequently applied measures: deposition of calcareous sand on dry grasslands and sod cutting in dry heaths. The research was carried out both in the Netherlands and the United Kingdom.

No favourable impact on nitrogen availability was observed following the deposition of calcareous sand, though there was an impact on the vegetation. Sod cutting led to a sharp reduction in net nitrogen mineralisation, and practically all the atmospheric nitrogen was accumulated by microorganisms. Over time, with the build-up of new litter, further nitrogen mineralisation can again occur. In addition, the sod cutting did not bring about the restoration of dry heath vegetation. In the Dutch research area, sod cutting led to the undesired domination of the heath star moss (Campylopus introflexus): an invasive and nitrogen-loving species of moss.

High atmospheric nitrogen deposition is an unsolved environmental problem in the Netherlands. Among its consequences is a strong accumulation of nitrogen in the soil, nitrogen leaching to the groundwater, and the loss of typical plant species. This has a significant negative impact on the presence and quality of the nutrient-poor habitat types, such as dry heathlands (H4030) and coastal dunes (H2130).

The Programmatic Approach Nitrogen (PAS) programme aims to protect nitrogen-sensitive habitat types in Natura 2000 areas in our country. On the one hand, this is being done through the gradual reduction of nitrogen deposition and, on the other, through mitigation measures that are required, in the case of high nitrogen deposition, to preserve, and when necessary to restore, the habitat types in these areas.

Mitigation measures often involve ‘regular’ ecological restoration management measures, the mitigation impact of which is only supported to a limited degree by scientific research. As nature managers and implementors of PAS measures, the Dutch water utilities require greater certainty regarding the effectiveness of mitigation measures. With this in mind, the present project involved research in two dry habitat types. 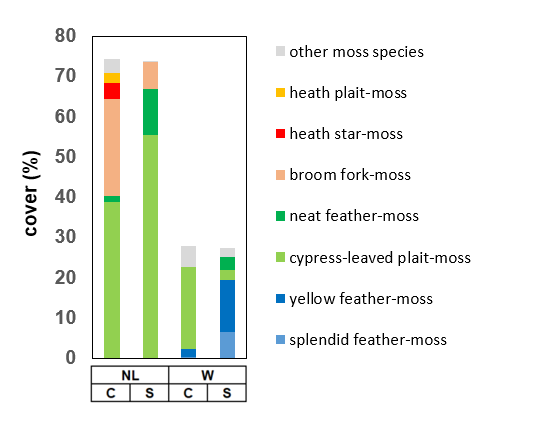 The average cover of moss species in dune grassland plots without (C) and with deposition (S) of calcareous sand in the Netherlands (NL) and Wales (W). In the Netherlands the proportion of cypress-leaved plait- moss is higher in plots with sand deposition, while in Wales it is yellow feather-moss. Both are species of base rich soils. 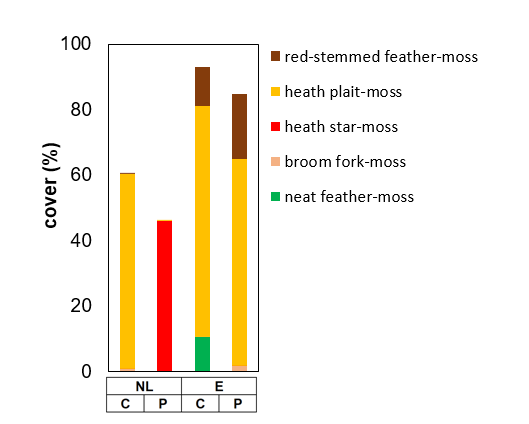 The research examined the impact of the two frequently applied mitigation measures on nitrogen metabolism and vegetation. This involved the stimulation of the deposition of calcareous sand in dry dune grasslands and the removal of the organic topsoil (sod cutting) in dry heaths. In four areas in the Netherlands and the United Kingdom plots were selected with and without the above measures.

The soil variables applied in the research were: degradation rate of organic matter, nitrogen metabolism (stocks, mineralisation, leaching), productivity and species composition of the vegetation. The measurements were analysed in terms of the effects of the measures and nitrogen deposition. 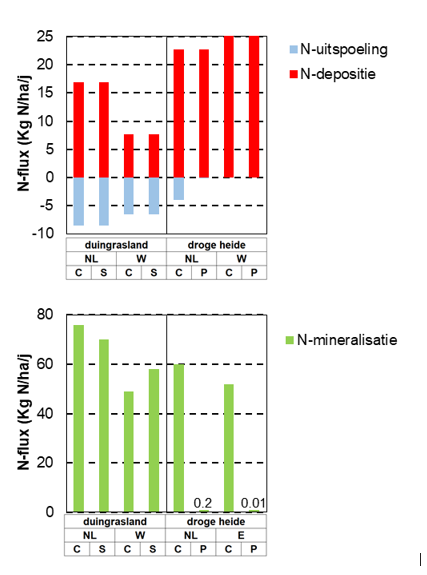 <<Chart terms (top to bottom): N leaching; N deposition; dune grassland; dry heath; N mineralisation>>
Deposition, leaching to groundwater and amount of nitrogen released during degradation of organic matter (mineralisation) in dune grasslands without (C) and with deposition of (S) of calcareous sand in the Netherlands (NL) and Wales (W), and in dry heaths without (C) and with sod cutting (P) in the Netherlands (NL) and England (E).

Neither of the two mitigation measures lead to a reduced availability of nitrogen, and thus have no favourable effect on the nitrogen metabolism.

Deposition of calcareous sand in dry dune grasslands does not lead to a lower stock of organic matter concentrations and nitrogen. The degradation of organic matter increases, but nitrogen mineralisation does not. The species richness does not change, but the vegetation does restore because lime-loving species are fostered.

Sod cutting of dry heaths results in a lower stock of organic matter, total nitrogen, ammonium, nitrate and phosphorus, and a slightly increased pH. The net nitrogen mineralisation and nitrogen leaching to the groundwater drop to practically zero. This means that the high nitrogen deposition from the atmosphere is entirely accumulated in the soil. Net nitrogen mineralisation and leaching did occur in heaths where sod cutting was not done.

In the short term (12-20 years) sod cutting leads to a lower availability of nitrogen, but over time lots of nitrogen builds up in the litter layer, and its mineralisation increases. Moreover, sod cutting does not produce an increase in species richness, but it does result in high heather coverage. In the sod-cutting plots at the Dutch research site, there was a predominance of the heath star moss (Campylopus introflexus): a nitrogen-loving and invasive moss species. The sod-cutting plots at the English research site showed a predominance of heather plant moss (Hypnum jutlandicum) and red-stemmed feather moss (Pleurozium schreberi), which occur frequently in well-developed, old heaths. 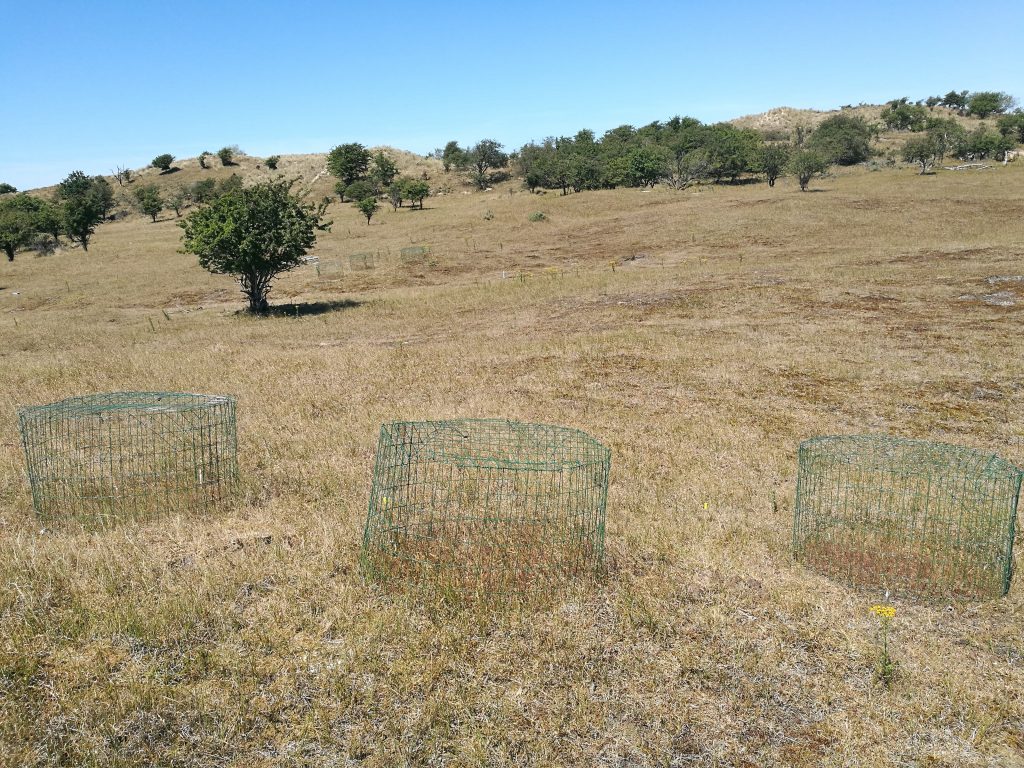 Mini enclosures for the measurement of the vegetation’s productivity in the Amsterdamse Waterleidingduinen dunes.