How can the water sector assist a city achieve its circular ambitions? A city like Nieuwegein, where the most sustainable city centre in the Netherlands must emerge and new residential districts are programmed. During the ‘Water and Energy in the Circular City’ gathering, participants from the water sector, government, private sector and education shared their thoughts on the question.

Issues like creating more (value) with less water, always having sufficient water for urban green spaces, and reusing water, were prominent in a succession of presentations. The objective was to work together in generating perceptions of what a circular city means and how it can be brought about, with a special focus on water. Boundaries were crossed, practical experiences shared and connections made. The result: an agreement to meet again next year and a commitment to seek out even more stakeholders to take part.

The 5 February event was organised by KWR in association with the municipality of Nieuwegein, Waternet and Allied Waters, within the framework of the Circular Economy Week. Among the more than 30 participants, was city councillor Marieke Schouten who, as the first speaker, explained the big circular ambitions of her city of Nieuwegein. With a portfolio that includes sustainability and the energy transition, she was very frank: ‘There is as yet no ready-made answer to the question of what a circular city is. This is something that has to be explored more closely, together with knowledge institutes like KWR. Our role, as the government, is one of giving direction, since we all have to do this together. Scientists keep us informed on the latest developments and help keep us sharp. They are a vital partner. That’s why a meeting such as this is particularly welcome.’ In her talk Marieke Schouten stressed the important role of water. ‘Nieuwegein is a green and blue city. Since ancient times it’s always had a lot of water, which connects the past and the future. As we evolve towards circularity, we want to make better use of the potential of water.’

Most circular city centre in the Netherlands

One person who is making an important contribution in Nieuwegein to the renewal plans is Wieger Apperloo, area manager and project leader of City West Circular, which is tasked to transform downtown Nieuwegein into the most circular city centre in the Netherlands. During the meeting, he recounted all the successive stages that have been gone through since 2017. Following a guideline document, with sustainability as its governing principle, the city drafted a process document in which everything revolves around co-creation, as a means of building support.  The area tasking was also determined and the budget allocated. Wieger Apperloo: ‘It’s a major challenge, because the sustainability concept turns all governance models upside down. Take the reuse of greywater. What happens if someone cleans their brush with turpentine in the kitchen sink? Or when a handy-man unintentionally makes a mistake when connecting indoor pipes? Then, all of a sudden, you’ve got blackwater in your greywater pipe system. Who is responsible? And how are we going to control it?’ A variety of stakeholders hope in a collective project to develop knowledge that is needed to realise the design and development of a circular water cycle in Nieuwegein’s city centre. 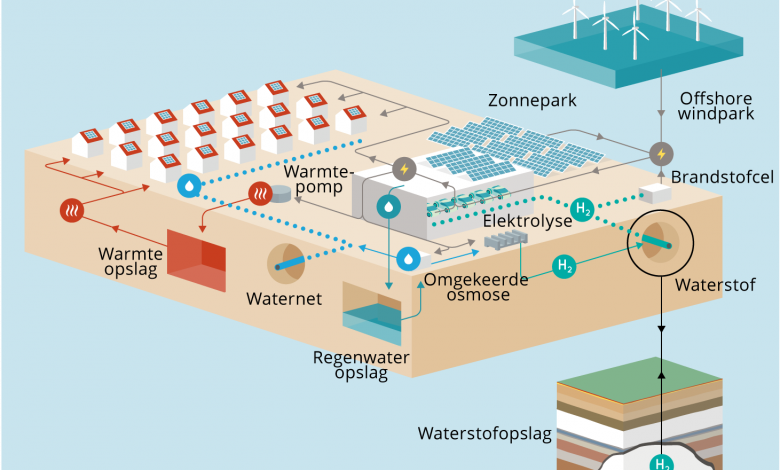 The principle of a circular city.

To give policy-makers a shot in the arm with examples taken from practice, KWR researchers Henk-Jan van Alphen, Marcel Paalman, Ruud Bartholomeus and Jos Boere explained their work on circular questions with regard to water and energy in the circular city. For instance, Henk-Jan van Alphen showed how the  SUPERLocal Kerkrade project applied multiple value creation to simultaneously address numerous issues surrounding the city’s local water loop. With two systems – a vacuum toilet and rainwater harvesting as an alternative source for drinking water production – the researcher explained how various parties with stakes in the systems’ development were heard and their views taken into account. Housing corporation, wastewater utility, drinking water utility and municipality can all jointly ensure that circularity becomes widely embedded so that it can persist into the future. One of the outcomes of the research is the definition of fifty indicators which enable the continuous measurement of value.

Ruud Bartholomeus explained the opportunities for water reuse. The use of treated residual water is increasingly being seen as a key part of the solution to improving the balance between water demand and water supply. Both the opportunities and the risks of water reuse have to be taken into consideration if residual water is to be used ‘responsibly’. Responsible water reuse demands a multidisciplinary approach; numerous in-house KWR expertises come together within this theme. The transformation of WWTPs into Water Factories is one development aimed at delivering ‘customised water quality’, limiting the risks of spreading pollutants and stimulating the reuse of residual water among sectors.

The value of water

The examples of value creation and water reuse were very familiar to Waternet’s André Struker, who spoke in his presentation about Amsterdam’s plans to build 8,000 homes on Strandeiland island, which will include new forms of sanitation among other features. ‘The value of water is talked about more and more. For instance, the Water Authorities speak not only about the treatment of wastewater, but also about making use of water in a specific area. How can we take drought into account for instance? In Amsterdam, it’s increasingly a matter of getting water to function as a connecting element for a liveable metropolitan region.’

The afternoon concluded outdoors, with a visit to the hydrogen and solar panel park at KWR and Waternet. A beautiful example, perfectly fitting with image of Nieuwegein, aimed at also including mobility as part of the journey towards circularity. In his presentation of the Power-to-X project prior to the mini-excursion, Jos Boere spoke of the promising future of hydrogen as an extremely clean energy carrier, and as a solution to the problem of an overloaded power grid. Councillor Marieke Schouten praised KWR for the way in which its research contributes to the discussion about the use of hydrogen to increase the sustainability of neighbourhoods. ‘We have a very long road ahead of us, and our collaboration can only become more intense.’ 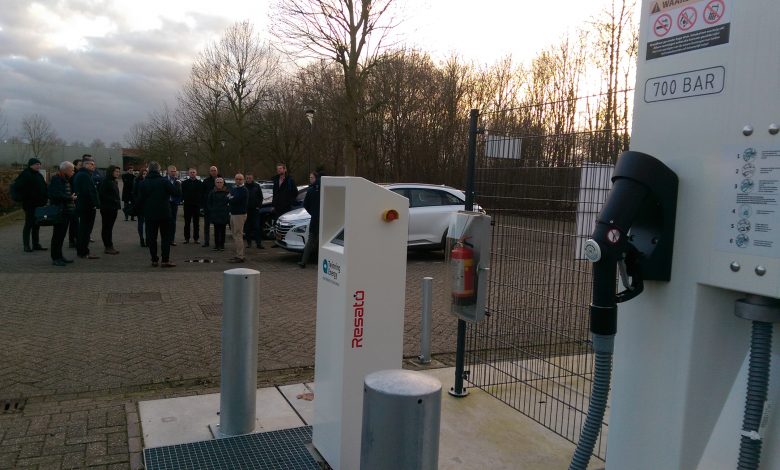 The meeting’s participants learn about the operation of the hydrogen and solar panel park at KWR and Waternet.