An analysis of water research in Europe shows that the international network has grown strongly, both in dimension and diversity. But this network is ephemeral in nature, because organisations collaborate with each other in constantly changing combinations. The network’s continuity is therefore a matter deserving attention, and both governments and the research organisations themselves have a contribution to make.

Based on an analysis of a large database of projects financed by the European Union, researchers from KWR and Rathenau Institute have produced a profile of the European water research network. The results of their work were recently published in two scientific journals (Water Policy and Industry and Innovation)  and the Dutch periodical for water professionals H2O. Europe’s water research network has grown strongly over the past 30 years, both in dimension and diversity. While research and academic organisations predominated during the first European Framework Programmes, the business community took on a much more active role in the later ones. Moreover, small countries and new EU member states account for a relatively big part of the network.

The importance of sustainable networks

In light of today’s global water challenges international collaboration is crucial. European investments in joint research and innovation projects are very important in this context. At the same time, however, the European network is ephemeral in nature, because organisations collaborate with each other in constantly changing combinations. In the trade publication H2O, the researchers make three suggestions aimed at promoting continuity in the network. Governments could create more stability by pursuing more predictable research policies. Secondly, governments could themselves play a more active part in water research and innovation projects. And thirdly, the knowledge organisations could also build up a sustainable water research network themselves. One example of the latter is Watershare, a structural collaboration involving around 20 institutions which share knowledge and tools with each other. 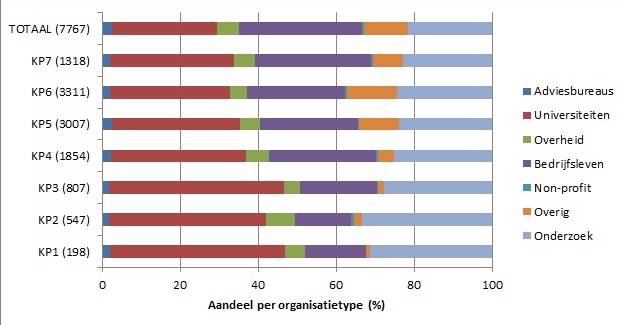 Share of each type of organisation in the water research network per Framework Programme (sum of total number of participants per FP in parentheses).