In mid-2015, the German Emschergenossenschaf organised a meeting to discuss the European DESSIN project’s preliminary results and future plans. As part of the meeting’s programme, the participants also visited the large-scale restoration project in the Ruhr area.

From a mining to a water-wise area

KWR has been a partner of the DESSIN project since its start in 2013. DESSIN’s aim is to develop, demonstrate and promote innovative ecosystem services. Within the project, a methodology for the valuation of ecosystem services is being developed and implemented in demonstration sites in Germany, Norway, Spain, Greece and the Netherlands. The German site is one in which, after the decline of mining activities, the area was more or less returned to its natural state, a state in which water plays the central role. Thus the natural course of the Emscher river was restored, the water quality was improved using an innovative filtration system to deal with the harmful effects of sewer overflows, and a 400-km underground sewer system was installed. The deep mineshafts will also have to be refilled and closed to prevent the water from flowing away. The project will ultimately improve the living environment in the entire area. 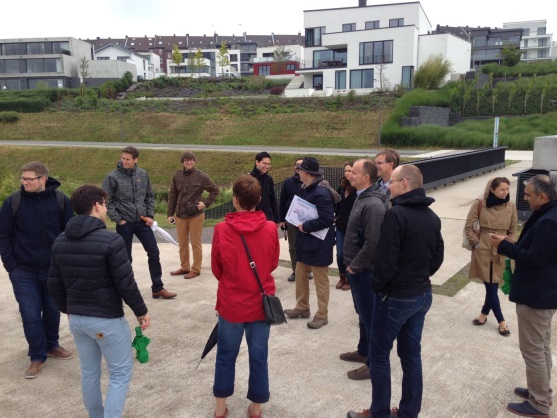 Field visit to the Emscher area

KWR is studying, within the EU’s DESSIN research project and together with technology provider Bruine de Bruin, the extension of the underground pipe system at the Prominent tomato grower in the Westland region. The purpose of the research is to establish the degree to which extending the current system, by means of a Freshkeeper and reverse osmosis desalination, improves the effectiveness of the storage and recovery of rainwater surpluses in a brackish environment. This involves significant ecosystem services such as benefiting from the subsurface’s storage capacity, using the local water, making water available for horticulture, and decreasing the risk of flooding through the temporary storage of rainwater.