Ion exchange (IEX) is being increasingly used for the removal of organics, for example, for purposes of removing water colour and water hardness. KatIEX is used for removing hardness, and AnIEX for the removal of colour in the form of humic acids. The spent regenerant contains numerous salts and, in the case of AnIEX, humic acids. Discharging this complex stream is not always an option. But, in any event, by treating the spent regenerant, one can possibly recover valuable components, salts and/or humic acids. By separating the salts and the humic acids, both salt (NaCl) and the humic acids can be usefully reused. Vitens uses nanofiltration (NF) and diafiltration (DF) to treat its spent regenerant but, because of the wide variation in the composition of spent regenerant streams, Vitens’ approach is not universally applicable. This is why, in this project, we studied which treatment trains might be of interest on the basis of a technical-economic analysis of spent regenerant from both AnIEX and KatIEX.

After surveying the technical possibilities, we conducted a scenario study to determine which options for the treatment of spent regenerant from both AnIEX and KatIEX are of most interest from an economic perspective. We then carried out lab-scale tests with forward osmosis (FO) and electrodialysis (ED) on the spent AnIEX regenerant from the Andijk plant (PWN) and the spent KatIEX regenerant from the DPW Botlek plant (Evides).

Application of FO technically is feasible, of ED (+NF) on spent AnIEX regenerant is promising 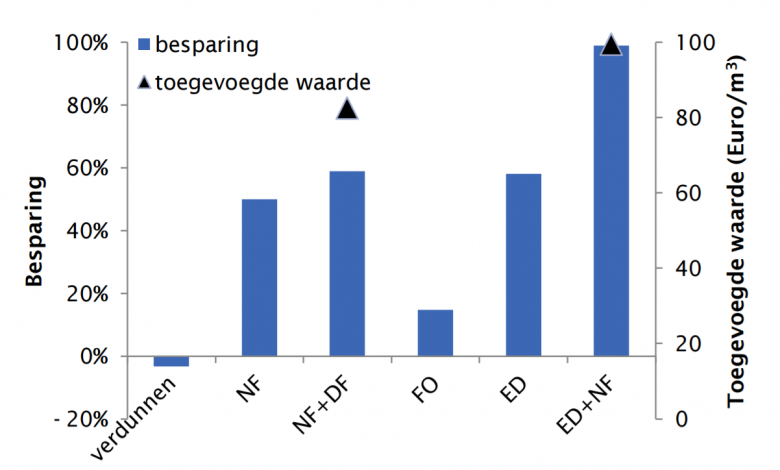