The routine determination of the safety of our drinking water is highly important. In practice this involves the use of a culture method for the intestinal bacteria E. coli and enterococci. This method takes more than two days to carry out in practice.

The detection of E. coli and enterococci is a good measure of the safety of our drinking water. In the context of maintenance work and of emergencies, it is important to be able to quickly control the drinking water for the possible presence of these bacteria. An RT-PCR method for the detection of E. coli is already applied at Dutch and Belgian drinking water laboratories. However, rapid intervention following emergencies and work activities requires a capability for a wider testing for the presence of enterococci. To this end, an RT-PCR method was developed to detect ten enterococci that can occur in drinking water. This method has great potential for a wider determination of the hygienic reliability of drinking water. But before the step can be taken towards implementation, the method requires extended validation.

In order to validate the RT-PCR method for enterococci, it was compared to the legally prescribed culture method. To begin with, the relative detection limit of the two methods were set next to each other. The sensitivities were then compared using sixty artificially contaminated drinking water samples.

The specificity of the RT-PCR method was determined through RT-PCR experiments on the ten enterococci and about thirty non-enterococci.

The RT-PCR makes possible the rapid detection of enterococci in drinking water following emergencies or work activities. Following validation, this method can be implemented at drinking water utilities. The validation report and the provision will be used for the legal approval at the Human Environment and Transport Inspectorate (ILT) and the National Institute for Public Health and the Environment (RIVM), and, at a later stage, also at the European Microbiology Expert Group (EMEG). 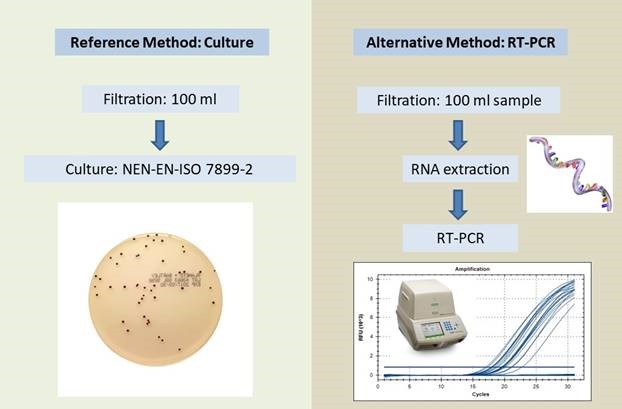 Overview of the procedure for the classical culture method (left) and the newly-developed, rapid RT-PCR method (right).