The nanoplastics, or microplastics, that result from plastic pollution that ends up in the sea are harmful to marine life. Nanoplastics are also probably present in freshwater, though we don’t have a clear understanding of this. In view of the possible health hazards of nanoplastics it is important that we develop our knowledge about plastic pollution. The TRAMP project aims to determine the degree to which inland waters in the Netherlands are polluted by these extremely small plastic particles. KWR researchers are contributing primarily with regard to a measurement method for nanoplastics, an understanding of the particles’ behaviour/removal during water treatment, and insights into their impact on humans (using bioassays). The results will subsequently be translated for water sector applications.

Need for clarity about plastics pollution

Over the last couple of decades or so, scientists have observed plastics pollution in all kinds of aquatic environments, particularly in the oceans. The consequences for marine life are often very apparent. Animals get entangled in plastic nets and lines, or become undernourished because they ingest more plastic than food. But the impact of plastic nanoparticles, which are too small to be observed with a standard microscope, is for the most part unknown. The particles are the result of the slow but steady breakdown of plastics in the environment into ever smaller fragments. Perhaps this occurs in freshwater as well as seawater.

There is a great need for more clarity about plastics pollution, for example, about the extent of the problem, why plastic particles could present a danger, and whether it’s an issue in the Netherlands. Scientists assume that nanoplastics entail health hazards. One possible danger is that nanoplastics accumulate in plants or animals, and thus eventually end up in our food chain. Nanoplastics might also easily bind themselves to harmful compounds and then release them once they enter our bodies.

The TRAMP project is mapping the extent to which Dutch inland waters are polluted by extremely small plastic particles. TRAMP was approved within the STW’s Open Technology Programme, which is one of the funding instruments through which STW promotes new technologies of economic and societal value. 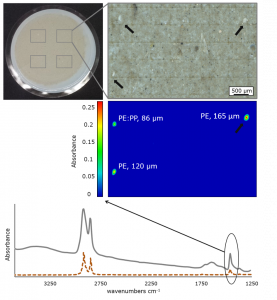 The methodology for a large-scale determination and identification of nanoplastics in a sample of surface water from the IJsselmeer lake. The black arrows indicate three plastic particles.

KWR is working together with Wageningen University (WUR) and Utrecht University in the TRAMP project on the development of new methods to build our knowledge about plastics pollution. The contribution of our researchers is primarily related to the measurement method for nanoplastics, our knowledge of the particles’ behaviour/removal during water treatment, and insight into the impact on humans (using bioassays).

TRAMP is answering questions about how to measure extremely small plastic nanoparticles, the degree to which they pollute Dutch freshwater areas, and how to determine their harmfulness. The project also involves the development of calculation models to predict how the extent of plastics pollution varies with the production of plastics. Through the joint research for the water companies, we translate the knowledge developed to satisfy the wishes of the drinking water sector.

One of the TRAMP project’s special features is its large scale. This refers not only to its aim of rendering nanoplastics measurable as well as predictable, but also to the large group of research partners that are heavily investing in it, alongside STW. The group consists of eight waterboards, the Ministry of Infrastructure and the Environment, STOWA, IMARES, NVWA, RIKILT and RIWA. These parties, together with the Deltares research institute, remain closely involved during the course of the project and will, ultimately, be able to make practical use of its results.