Leaks in water mains are a problem with multiple implications. They involve the loss of expensive water, the interruption of the service for clients, rising repair costs, and possible hassle or damage to the surrounding environment. In addition, burst pipes can lead to contamination that threatens water quality. Water companies are trying to detect leaks faster and faster, preferably before clients notice. However, that requires a network of sensors. Since sensors such as flow meters and pressure sensors are expensive to purchase, install and maintain, the question is: how many sensors need to be installed and where?

Working with KWR, Brabant Water decided to look for solutions to this problem using numerical optimisation techniques of the kind implemented in Gondwana.

KWR and Brabant Water went through an iterative process in 2019 in order to determine the optimal positioning of pressure sensors in the Seppe area of North Brabant (Netherlands).

The first step was to collect a range of input data such as a representative hydraulic model of the network and potential sensor locations. The second step consisted of defining the optimisation problem. In a cycle of design sessions, various possibilities for the formulation of the optimisation problem, including the selection of objectives, preconditions and parameter settings such as leak size, were discussed in detail. The optimisation problem was further refined in each cycle, resulting in the best available tailor-made solution. After a few months, the process produced an optimised network of sensors and insights into how water companies can use numerical optimisation techniques to help solve problems.

Brabant Water delivered the knowledge of the system and KWR provided its experience with optimisation techniques: a valuable combination for a successful project. In addition to the importance of the experiments, the preliminary analysis of the results helped the water company to develop an awareness of the complexity and sensitivity of the parameters that affect the positioning of pressure sensors in the mains.

The number of sensors emerging from the solutions varies from 10 – which corresponds to the current number of sensors installed – and 30, the maximum number of sensors that Brabant Water can install with the available budget. The sensors currently installed cover 26.5% of all connections (43,143). Adding 20 additional sensors allows this coverage to be raised to 53.2%.

Total coverage of possible leaks with sensors cannot be guaranteed because the pressure drop is often too low to detect a leak given the leak value considered. Moreover, in some parts of the mains network, there are no locations that qualify for sensor placement, even when the pressure drop is such that a leak can be detected. So there will always be blind spots in the network. The highest added value is obtained by installing between 11 and 18 sensors. The number of covered connections increases by about 2-3% with each added sensor. From 19 sensors on, the graph flattens out and the added coverage per sensor starts to decrease from 1% to 0.2%.

Maps have been made to illustrate clearly the gain with each installed sensor for an increase in leak detection (Figure 1). These coverage maps make it possible to show where the sensors are located for each solution. Different colours show the pipes in which the simulated leaks are detected between two nodes. The grey pipes are outside the scope of the applied solution.

Although the current pressure sensors were installed for other reasons, the simulation shows that six of the ten detect leaks effectively. Only one of these sensors is visible in Figure 1a. Figures 1b and 1c also show that a different number of sensors (24 and 25 respectively, of which only 16 sensors are visible in both cases) can result in a different spatial configuration: in other words, the sensor locations in the solution with 25 sensors are not the same as the locations in the solution with 24 sensors, plus a new location, and several sensors are located elsewhere. From the perspective of the gradual investment required for the installation of new sensors, the final configuration must therefore be determined in advance. It should be taken into account here that performance levels will not be optimal until all the sensors have been installed.

Lessons learned and looking to the future

In summary, several lessons have been learned in the project. For example, it is important for the first step to involve thinking about the intended purpose, which data are available or missing, and which constraints need to be considered. It is also necessary to be able to use a tool that works with an evolutionary algorithm such as Gondwana. It must also be possible to collaborate with experts from the drinking water company so that they can support the optimisation process. And finally, we should mention the importance of setting up enough tests before the process begins in order to understand whether the sensors will behave as expected, and whether the selected parameters are appropriate for the ultimate goal. Taking all these factors into account, it should be possible for any drinking water company to use pressure sensors in a similar way to detect leaks.

In the words of an expert from Brabant Water: ‘All in all, this project didn’t take much time, it generated a lot of unexpected questions and answers, taught us a lot about the hydraulic system and produced a surprisingly optimal result for the locations of our new sensors.’

As a follow-up to the project, Brabant Water will be continuing in the coming months with the purchase and installation of pressure sensors and the method used here will be extended to other areas. 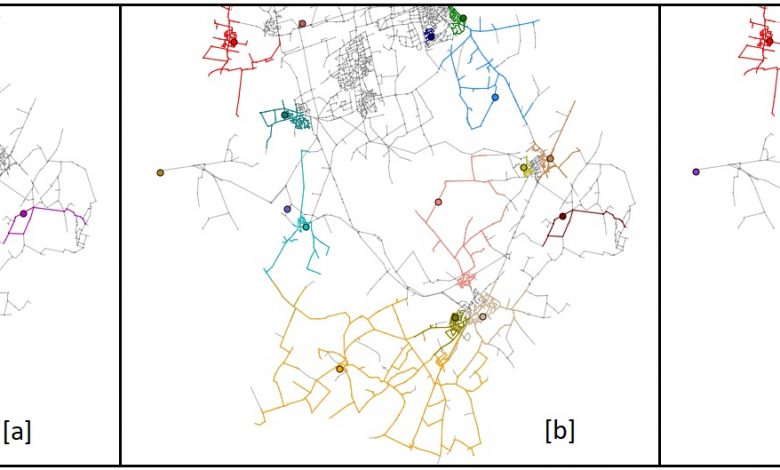 Figure 1. Coverage map [a] for the currently implemented sensors and for the solutions with [b] 24 sensors, and [c] 25 sensors. For data protection reasons, only part of the Seppe area is shown. It is possible to display the locations of the sensors for each solution. Different colours show the pipes in which simulated leaks are detected between two nodes. The grey pipes are outside the scope of the applied solution.