Agricultural yields depend on the amount of moisture in the root zone. But in the summer soil moisture levels are often insufficient and result in reduced yields. In the southern sandy ground region this represents a loss of €50 million annually. If the water management isn’t changed, the increasingly capricious climate will result in more frequent water shortages. As a consequence, annual drought damage could rise to €140 million (Klijn et al. 2011). Adaptation measures aimed at limiting damage risks are therefore of considerable economic importance.

A subirrigation system, using the residual water from Bavaria’s water treatment process, was set up and tested on a parcel of agricultural land next the brewery. The parcel has a relatively high elevation and the summer water table levels are deeper than two meters below the surface. There is therefore no way of predicting whether the test will succeed and lead to an improved moisture provision for the crop.

The test involved installing a drainage pipe system on a parcel of grassland of 8.5 hectares. The pipes are branched and connected to each other through a collection pipe. Such controlled drainage systems are designed both for the discharge and retention of water. They have the additional advantage of enabling the active regulation of the water table level and soil moisture conditions. However, such active optimisation of soil moisture content depends on water being available. Additional possibilities for the active control of the crop’s water provision only exist when water can be actively supplied and infiltrated via a controlled drainage system. We call this subirrigation, the objective of which is to raise the water table and soil moisture content (via capillary delivery). The project thus involves the use of Bavaria’s treated residual water as a source for subirrigation.

Insight into opportunities and risks

This form of irrigation is relatively new in the Netherlands. That’s why the trial’s success is not guaranteed, and nothing can be said beforehand about what an optimal implementation would be, nor about the impact on the water table levels and chemistry. Success actually depends on a number of factors, including the design of the drainage network, the quality of the effluent (clogging potential), the soil properties, the water management in the area, and the wishes and requirements of the farmer concerned and of the neighbours. Moreover, desirable and undesirable side-effects might occur. One desirable side-effect could be an improvement in the quality of the surface water in the Goorloop stream, thanks to the fact that the effluent will be purified as a result of the ground passage. Negative side-effects could include water damage to neighbouring and low-lying parcels, or a deterioration in the environmental-hygienic soil and groundwater conditions.

It is important that we understand the opportunities and risks of the reuse of effluent streams for freshwater supply purposes. In the Netherlands the use of treated residual water from industry and WWTPs is still quite limited as a means of battling drought, but it is advancing as a form of (climate) adaptation in anticipation of increasing agricultural water shortages. The Bavaria initiative of returning residual water to the surrounding environment is a good example of this and contributes to building knowledge in the field. 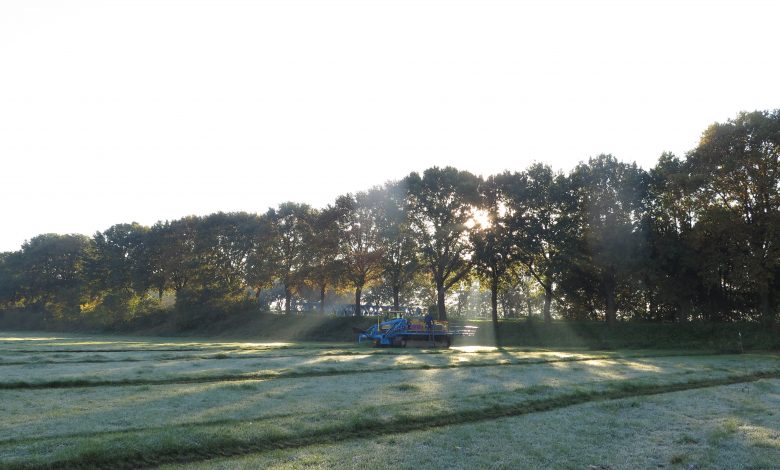 INSTALLATION OF THE CONTROLLED DRAINAGE SYSTEM ON FARMER VAN DIJK’S LAND. STARTING IN 2016, TREATED RESIDUAL WATER FROM BAVARIA’S PLANT HAS BEEN INFILTRATED IN THE SUBSURFACE USING SUBIRRIGATION. IN THIS WAY THE WATER TABLE AND THE SOIL MOISTURE CONTENT ARE MAINTAINED OR RAISED. THE SYSTEM ALLOWS THE FARMER TO ACTIVELY CONTROL THE MOISTURE CONTENT IN HIS MEADOW FOR OPTIMAL CROP PRODUCTION, WITHOUT, OR WITH ONLY LIMITED, SUPPLEMENTARY IRRIGATION.