Leaking methane from the deep subsurface poses a potential threat to groundwater quality. In addition, when the gas reaches the surface, it contributes to greenhouse gas emissions and there is the risk of explosion. “Other fluids from the deep subsurface could also leak to the surface through these and similar pathways,” says KWR researcher Gilian Schout. He defended his doctorate thesis at Utrecht University on 10 July. “So it’s important to map out connections such as these.” 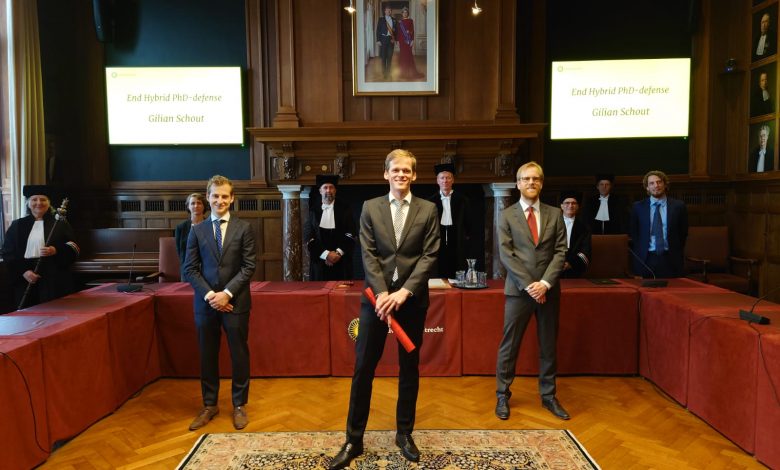 Gilian Schout (centre) after receiving his diploma, with co-supervisor Niels Hartog on the right behind him

Schout investigated the occurrence of methane leakage in the Netherlands at abandoned oil and gas wells and at the location where there was a blow-out during drilling for gas near Sleen (Drenthe, NL) in 1965. This study will help to improve our understanding of the behaviour and migration of methane in the subsurface so that the risks in the event of leakage can be better addressed.

Gas leakage in the Netherlands

Schout used a range of monitoring techniques in his study. For example, he analysed the presence of dissolved gases and their isotopes in groundwater samples, and used soil flux measurements to determine the amount of gas that escapes through the ground to the surface. Persistent methane leakage was found at two locations in the Netherlands during the course of the study: at an abandoned well in Monster and at the location of the blow-out in Sleen referred to above. “These findings show for the first time that we also need to take leaks like this into consideration in the Netherlands,” says Schout. “By using methane as an indicator, we can check the areas around closed oil and gas wells to see whether leakage pathways have formed and whether groundwater quality is at risk.”

Follow-up research at the two locations referred to showed that leaking methane in the ground is subject to several processes. For example, it can be retained and broken down in the ground. That makes it very difficult indeed to detect a leak. “For example, we were unable to detect any methane from the underlying natural gas reservoir with the flux measurements, even though the groundwater just below was almost saturated with methane,” explains Schout. “That was striking. Additional model studies showed that leaking methane can largely dissolve in horizontally flowing groundwater. In that case, there is no upward flux, just like when the methane is broken down. The simulations show that the gas sometimes does not reach ground level as a result of these processes, or that it only does so after decades. The negative impact on groundwater quality of any leak may therefore go unnoticed for a long time.” 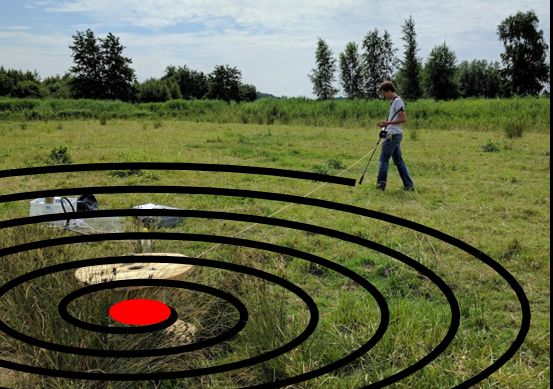 Part of the field study: methane concentrations in spiral form above an underground, closed and abandoned gas well

Niels Hartog, KWR researcher and co-supervisor of the research, emphasises the social importance of the work of colleague Schout. “By contrast with previous research, he’s literally plunged into the depths. The deep subsurface – in other words, depths of more than 1,000 metres – is virgin territory for the water sector but it is increasingly seen as highly relevant for the possible impact on groundwater. The controversy relating to the possibility of shale gas extraction in our country has acted as a catalyst for that new focus, which is also turning to the oil and gas extraction that has been taking place in our country for many decades in the deep subsurface.”

There is also interest in the deep subsurface because of the potential for geothermal energy, explains Hartog. That is a sustainable source of energy that the researcher thinks is highly promising. “In addition to possible storage in the future of green hydrogen, for example, the deep subsurface can play an important role on the road to a sustainable energy transition. This doctorate study makes it clear that we must take any possible leakage pathways near wells into account, even if those wells have been abandoned. This requires thorough risk assessment and monitoring because sustainability is not necessarily the same thing as safety either. Learning more about how activities in the deep subsurface can have effects that extend up to the ground level means we can make sound decisions with a view to the energy transition, and with adequate public support.”