In 1965 a catastrophic blowout occurred at a depth of two kilometres during the drilling of a gas well at Sleen. Utrecht University and KWR have together researched the shallow groundwater at the location. The results show that the groundwater directly overlying the blowout site still contains high, but at the site, non-hazardous, concentrations of methane. The results have been published in the prestigious ‘Proceedings of the National Academy of Sciences’ (PNAS). 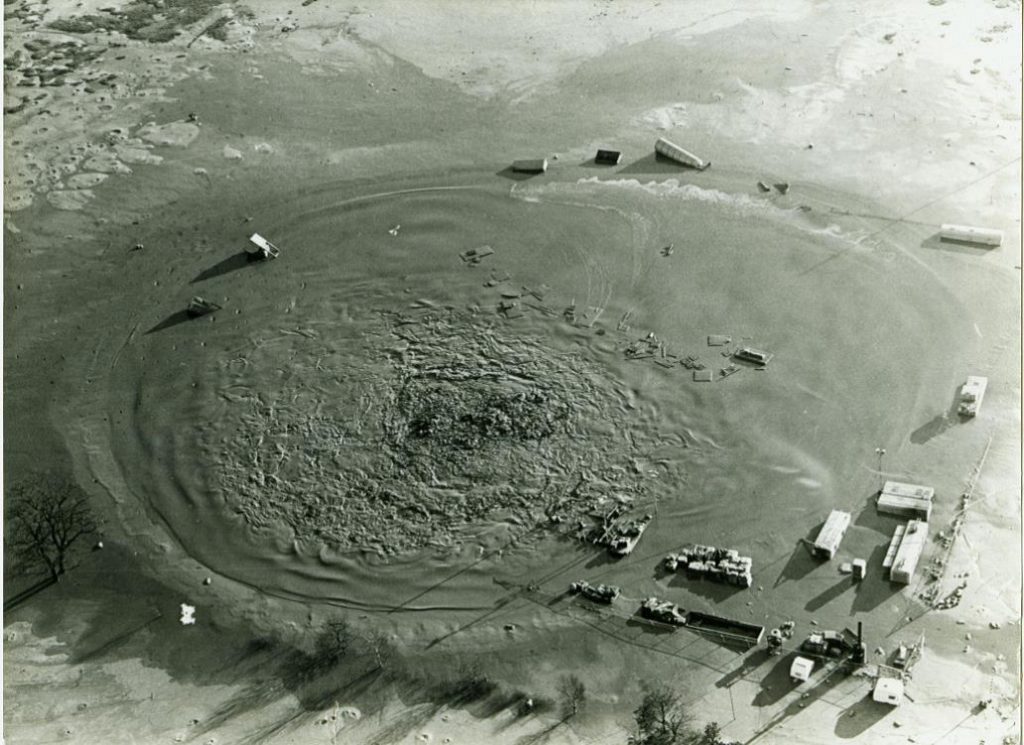 Aerial photo of the mud pool created by the subsurface blowout at the ‘SLN-02’ natural gas well in 1965. A number of sunken trucks and trailers are still visible on the edge of the crater.

The blowout site, which is near the village of Sleen in Drenthe province, is located in a groundwater protection area of the Drenthe drinking water company WMD. The blowout occurred during the drilling of a natural gas well. Large amounts of gas escaped through the fractures in the subsurface created by the high pressures. As a result, a bubbling mud pool formed on the surface and the entire drilling rig and other elements disappeared into the ground. It took months for the mud pool to settle. This was achieved in part through the subsurface injection of large quantities of cement using a relief well.

Leakage from the gas reservoir

Because the blowout occurred in the Valtherbos-Noordbargeres groundwater protection area, WMD has monitored the groundwater at the site for decades. When the KWR researchers found natural gas in 2015, in the framework of a water-sector exploratory research project, the decision was taken to carry out more extensive scientific research. Apart from showing the methane leakage, the researchers also studied the fate of the leaked methane in the groundwater. They found that, to a limited extent, the methane is degraded by microorganisms, which contains its further diffusion. Today, 50 years after the incident, the methane ‘plume’ has expanded by about 500 metres away from the blowout site. The highest methane concentrations from the gas reservoir are at the blowout site itself.

The research was carried out by Utrecht University doctoral candidate Gilian Schout in the framework of the KWR/NWO ‘Shale Gas and Water’ partner programme, together with WMD. The project was co-financed by the Brabant Water, Watermaatschappij Limburg and Oasen water companies. Schout conducted his research jointly with KWR researcher Niels Hartog, Majid Hassanizadeh (Utrecht University) and Jasper Griffioen (Utrecht University and TNO Geological Service).