The consumption of cocaine and MDMA (XTC) in the Netherlands has been the highest in Europe for a number of years. Methamphetamine consumption is increasing in the Netherlands. In 2019 a discharge of methamphetamine production waste was detected in the region of Eindhoven. These are the conclusions drawn by researchers Thomas ter Laak and Erik Emke from the latest figures produced by long-term European wastewater research.

The European Monitoring Centre for Drugs and Drug Addiction (EMCDDA) today published the results of the drug monitoring in the wastewater of 68 large European cities. For the ninth time in a row, KWR analysed the wastewater of 1.5 million Dutch residents in the cities of Amsterdam, Utrecht and the region of Eindhoven.

Collaboration of Water Authorities and KWR

For KWR researchers, the research involved the analysis of wastewater samples over a period of one week. The concentrations of cocaine, amphetamine, ecstasy and methamphetamine in the samples were measured. As in preceding instances, the work was carried out in close collaboration with the three water managers involved: Watercyclusbedrijf Waternet (Amsterdam), Water Authority De Dommel (Eindhoven) and Water Authority Stichtse Rijnlanden (Utrecht). Researcher Thomas ter Laak: ‘Just to be clear, the municipalities of Amsterdam, Utrecht and Eindhoven are not the clients for this research work. KWR finances the research with EU money and collaborates with the water managers.’

The consumption of methamphetamine in Amsterdam, Utrecht and the Eindhoven region is significantly lower compared to that of other drugs. Moreover, compared to other European cities, the Dutch ones are not in the top group. Thomas ter Laak: ‘Consumption in Amsterdam has indeed increased significantly in recent years. And in 2019 we see that methamphetamine is being used in Utrecht, while in previous years it was not detected – at least, not at levels above the analytical threshold.’ In Amsterdam and Utrecht, a minimum of 23 kg of pure methamphetamine was consumed in 2019. The purity of the street quality cannot be determined. For the first time a discharge of methamphetamine production waste was detected in the Eindhoven region. This drug is currently gaining ground in the Netherlands, in terms of consumption and possibly also of production.

The consumption of amphetamine (better known as ‘speed’) has increased in Amsterdam since 2015. Erik Emke: ‘There are no measurement data on amphetamine use for the Eindhoven region due to several discharges of amphetamine production waste.’ In 2019, the residents of Amsterdam and Utrecht together consumed more than 168 kg of pure speed. Assuming a purity of 48%, this amounts to more than 351 kg of street-quality amphetamine. Consumption in Amsterdam and Utrecht is not among the highest in Europe. However, the research done in smaller Dutch towns does reveal consumption levels among the continent’s highest.

Drug map of the Netherlands

Wastewater research can be used as a policy instrument. It provides a picture, on a national and local scale, of total consumption of different types of drugs and the size of the national illicit drug market. This can assist in underpinning policy and in targeting the right locations. In addition, trends can be established and, through a greater monitoring frequency, the effectiveness of policy measures can be tested. Erik Emke: ‘In this way, wastewater research delivers information about the total consumption of a population. This kind of research therefore complements the results of population studies (information about the individual user) on addiction and drug use, or the figures on drug-related incidents.’

Wastewater research can also throw light onto where drug-production waste is discharged, and therefore on the national geographical distribution of drug production and market size.

KWR has been committed for several years, together with governments, to mapping total drug use in the Netherlands. This requires the daily analysis of the wastewater at all 327 treatment plants for a period of at least one week for a series of (illicit) drugs, such as MDMA (ecstasy), amphetamine (speed), methamphetamine (crystal meth), benzoylecgonine (cocaine) and THC-COOH (cannabis). Thomas ter Laak: ‘All of this information together provides and anonymous and objective measurement of drug use by municipality or region. A “Drug map of the Netherlands” is being created on this basis. So far, KWR has conducted measurements at only 25 of the almost 400 Dutch municipalities.’ 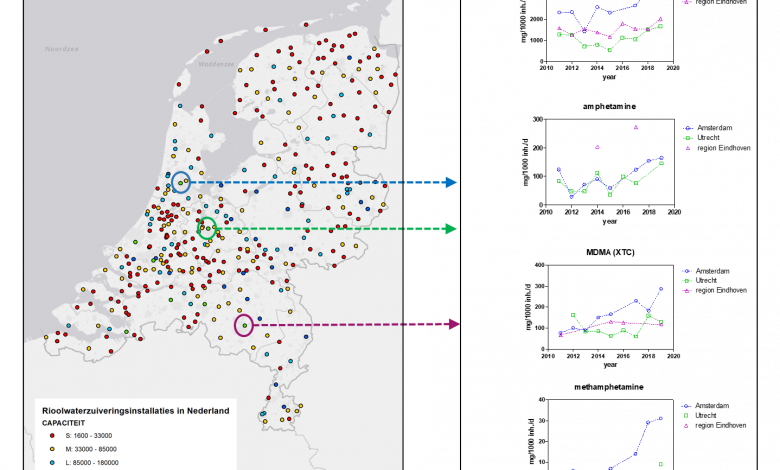 Wastewater monitoring of drug consumption in Amsterdam, Utrecht and the Eindhoven region over 2011-2019. KWR works together on this research – leading to the city map of Europe – with other European research institutes and with the Dutch Water Authorities.