Wastewater-based epidemiology (WBE) uses sewage as a source of information about citizens’ health and lifestyle. Analysis of sewage can provide information about the use of drugs and medications, the consumption of food and other products and about exposure to, for example, pesticides in the catchment area of a sewage treatment plant. The monitoring of pathogens is also possible.

Research into such ‘biomarkers’ was first carried out in 2005 for illegal drugs, but then quickly expanded. Wastewater appears to reflect society. Standardising the data for the population allows for comparison between different regions. Such information can help public authorities to test and improve their policy.

Wastewater as a reflection on society

In 2005, Italy became the first country to use a new method to measure the use of drugs in a city. The source: chemical analysis of sewage. The success of this study at once made it clear that sewage can provide a wealth of information about a population’s health and lifestyle.
All kinds of chemicals and microorganisms enter the sewage system via the human body, or via direct discharge, and then go onto the sewage purification system. Key to sewage epidemiology, or wastewater-based epidemiology (WBE), is the identification of biological markers (biomarkers). These can be chemical substances (that for example indicate consumption, use or exposure) or pathogens (bacteria, viruses or their genetic material). A biomarker is useful if it is excreted by humans, ends up in the sewage in detectable quantities, has no other relevant sources, and is stable. Research into drugs use among the population is the best-known application.

The first step is to take samples, which involves collecting sewage daily every 5-15 minutes and mixing it to form a single aggregate sample. This is necessary because the composition of the sewage can vary enormously throughout the day. The sample is processed, and possibly extracted and concentrated to optimise measurement of the biomarkers. The concentration detected is then multiplied by the flow (the volume of water that flows through the water treatment plant), so that the biomarker load is known. In the case of drugs, usage per day per 1,000 inhabitants can be calculated by correcting the load for human excretion and dividing it by the number of people in the catchment area. Conversion to the number of doses per 1,000 inhabitants is also possible. See figure 1 for a diagram of the steps and an example of a calculation. 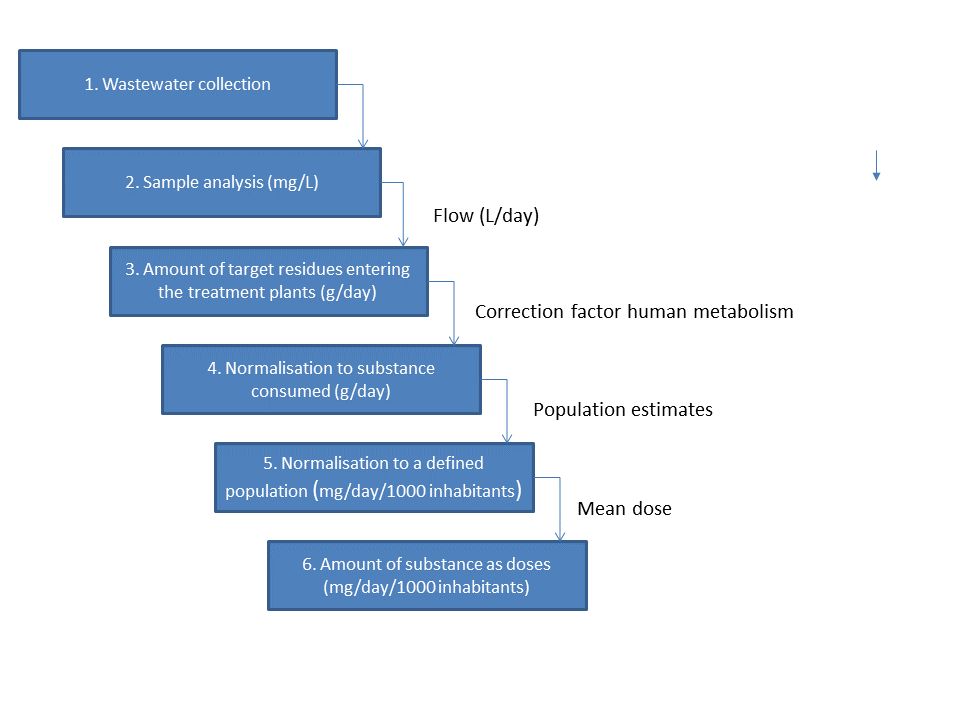 Figure 1: The key steps in analyzing sewage in wastewater epidemiology (WBE) and the required data per step (according to Castiglioni et al., 2014) 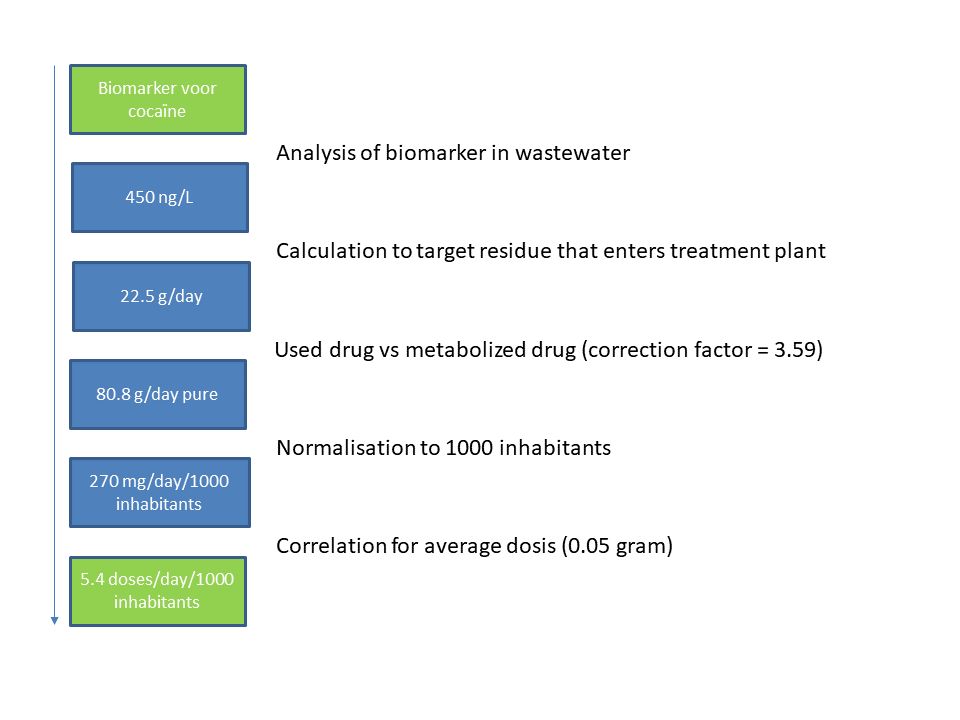 Example of a calculation 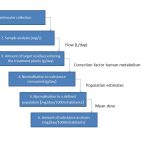 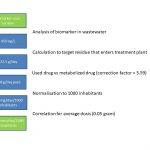 Size of the population

With WBE, it is important to standardise the data for the size of the population. The official number of inhabitants in a catchment area is often not up-to-date with respect to births and deaths, although these variations are small. Far more important is the influence of people’s mobility for work, entertainment or holidays. It is therefore unclear how many people per day or even per hour discharge their biomarkers into a particular sewage network. This can be corrected by working with ‘population biomarkers’. These are biomarkers whose excretion has a strong correlation with the size of the population, and that are independent of abiotic factors such as the weather and the geographical location. If the average emission of such a population biomarker is known for an individual, the number of people in the catchment area at a given time can be calculated. Common population biomarkers are sweeteners and ammonium.

WBE was first used in Italy in 2005 to measure the use of illegal drugs. This study looked at cocaine, THC, ketamine, MDMA and heroine, and humane metabolites of these substances. WBE was subsequently also used to determine the use of, for example, caffeine, nicotine, slimming aids and alcohol. It has also proved possible to detect the use of new psychoactive substances (new drugs) and trace waste discharges from drug production in this way (Choi et al., 2015). Examining sewage also allows a differentiation to be made between the legal and illegal use of, for example, pharmaceuticals. For example, it was shown that in various cities in the Netherlands, only one third of the Viagra used was obtained legally with a doctor’s prescription (Venhuis et al., 2014).

When using WBE, the influence of environmental factors on the measurements is important. One example is the increase in the nicotine load during periods of rain. This turned out to be due to the transport of ashes and cigarette butt remains through the rainwater to the sewage system. As well as what people consume, substances to which people are exposed in other ways were also considered. These might include pesticides, mycotoxins, parabens, plasticisers, fire retardant substances and UV filters. The means of exposure varies, but biomarkers of all these substances can be found in sewage. Exposure can then be related to location (close to industry, for example) and to trends in time (think, for example, of the seasonal use of pesticides).

The European network of sewage analysis, Sewage analysis CORe group Europe (SCORE), has shown that it is also possible to measure drugs use systematically and on a large-scale. This network coordinates international studies and ensures quality control. This enables research to be carried out using the same validated methods, yielding robust and comparable results. These data are then also used annually by the European Monitoring Centre for Drugs and Drug Addiction. In 2011, this allowed illegal drugs use in 19 European cities to be compared for the first time. Since then, the measurement network has been extended to almost 120 cities within Europe and beyond (González‐Mariño et al., 2020).

A broad range of biomarkers in the wastewater can tell us a lot about a particular population in almost real-time and with a high geographical resolution. This could be about behaviour (drugs use or eating habits, for example), exposure (to pesticides and industrial substances, for example) and health (pathogens or resistance to antibiotics, for example). The majority of studies into biomarkers are still academic and exploratory in nature. In the future, the analysis of sewage will be capable of delivering a wealth of socially-relevant information.

WBE can thus serve as a gauge of the population’s health. For example, it provides information about a population’s diet and the use of medications. For antibiotics, furthermore, this can be related to preventing resistance to antibiotics, because sewage contains bacterial resistance genes. Analysis of specific DNA fragments of pathogenic disease precursors can provide information about the spread of infections. Very recently, this technology was used to measure the incidence of SARS-CoV2, the virus responsible for CoviD-19, in various cities in the Netherlands (H2O/Waternetwerk, 2020). Analysis of sewage can thus provide a useful tool to monitor the outbreak of a virus on various geographical scales and even, if the resolution of the technologies is sufficient, to detect a virus in a population at an early stage.

Linking to other data

In all instances, it is important that the methods used are robust and reliable, but also that data from the examination of sewage are linked to other sources of information about the catchment area of sewage treatment plants so that correlations can be drawn. In the case of drugs production, this involves information from the police and investigative services. WBE can also be applied at events. For example, it can be used to look at alcohol and drugs consumption at a festival or the use of performance enhancers at a (non) professional sporting event. With regard to resistance to antibiotics, it is about a relationship between the use of antibiotics on the one hand, and the detection of infections with resistant bacteria in patients on the other hand. It thus becomes a little easier to detect antibiotic resistance in a population.