In principle, Europe’s citizens have a positive attitude towards water reuse. But whether they would personally reuse water depends greatly on their trust in the organisations involved in the water reuse. This is why organisations that want to promote water reuse have to invest in public acceptance and in building public trust; for instance, by involving citizens early on in water reuse initiatives, and developing a communication strategy which provides room for personal experiences and perceptions. These are some of the most important findings of the EU’s recently concluded DEMOWARE project, which aimed at strengthening innovation and cohesion within the developing European water reuse sector.

Since water shortages are occurring more frequently in parts of Europe, treated wastewater is being increasingly used in industry and agriculture, and even in drinking water production. Research was conducted at ten DEMOWARE sites into various aspects of water reuse, such as its technical possibilities, health and environmental risks, costs and benefits, and governance. One of the ten case-study sites is that of Torreele in Belgian Flanders, where indirect water reuse has been applied for drinking water production since 2002. One of the key success factors in Torreele was the openness towards citizens, including a visitor’s centre, tours and open days.

KWR conducted the governance research within DEMOWARE to establish which elements of policy, public involvement and stakeholder collaboration might hinder or even stimulate water reuse. Among other things, this involved organising citizen focus-group meetings to sound out the wishes and concerns of citizens, and explore the possibilities of enhancing trust in water reuse. The research outcomes can be found on the DEMOWARE website. 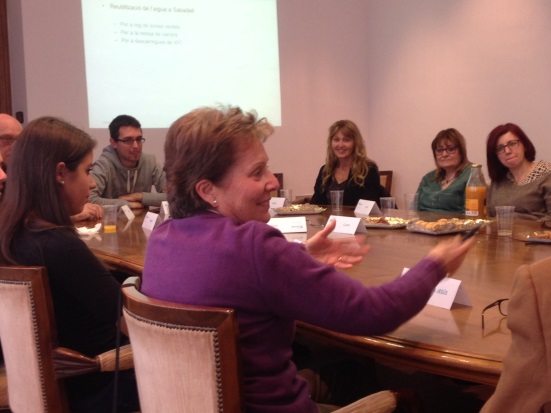 A discussion in a Spanish focus group.

The EU wants to stimulate water reuse. This is why work is now underway on a proposal to set minimum quality requirements for water that is reused for irrigation and groundwater recharge. DEMOWARE has drafted a policy brief calling for regulations with realistic (and not too restrictive) quality standards, based on the application in question and not the source of the (waste)water. Moreover, DEMOWARE has led to the establishment of a European trade association for the water reuse sector: Water Reuse Europe. Further information about membership can be found on the Water Reuse Europe website.