Drinking water companies use quantitative microbial risk assessment (QMRA) to demonstrate that the drinking water they produce is safe. A desire also exists to apply the same method to demonstrate the safety of water in the distribution network. Contamination of the distribution network following work on the network is an important factor in water distribution risk. A quantitative assessment of this risk demonstrates the water companies’ accountability to clients and government, while providing them with insight into their risk management. The added value of (supplementary) management measures can thus be weighed against other considerations, such as cost. Similarly, the costs associated with water quality assessments following work on the network can be weighed against greater assurance of safety.

To assess the health risks of such a contamination, a model was developed to stochastically measure the dissemination of the contamination, the probability that the contaminated water will be drunk and, in the event, the impact this would have on health. On the basis of a literature study and an analysis of the years-long measurement data of water companies, the different contamination pathways were identified and quantified.

We combined the modelled risk assessment (QMRA) with measurement data. On the basis of the literature study and a sensitivity analysis using the QMRA model, we determined the extent to which possible contaminants remain behind after (inadequate) flushing following work on the network. We used a hydraulic model to chart the dissemination of the contamination through the distribution network. The (interim) result takes the form of a calculated concentration of a pathogen or indicator organism at every location at every moment. This allows one to determine the probability that someone will drink contaminated water, or that contaminants will be detected if samples are taken.

The QMRA model’s end-result is the number of infections (as a cumulative frequency distribution) in the event of a contamination during work on the network. An alternative risk management objective is formulated for interventions in the network: if a contamination occurs, the probability that one or more people will be infected must be less than 5%. 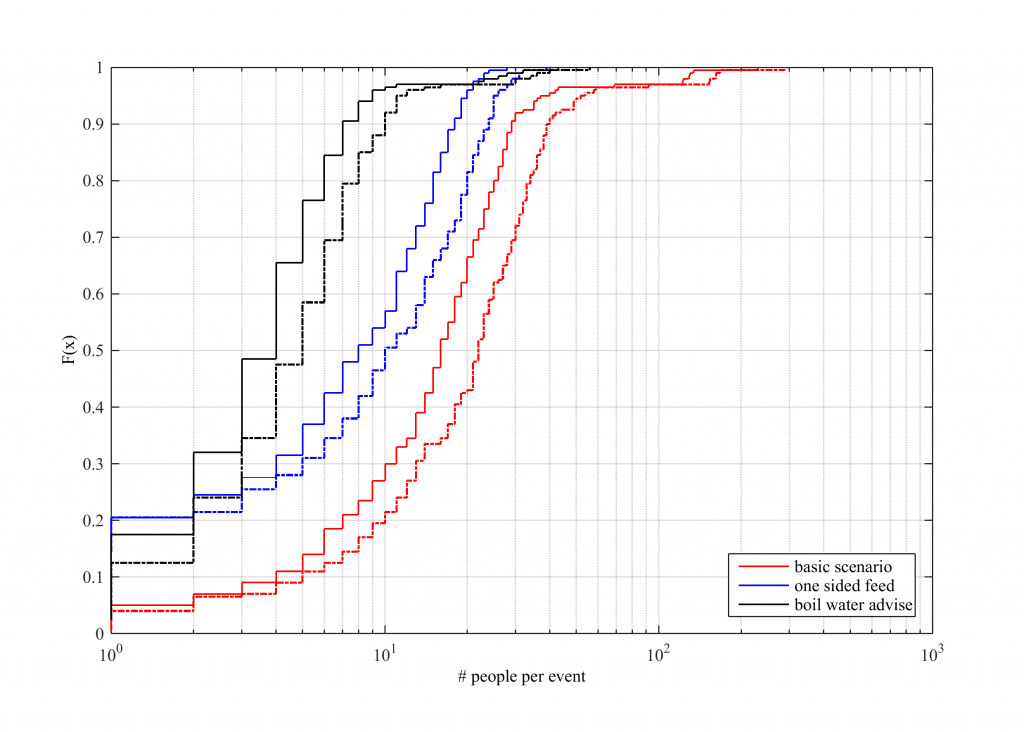 Number of infected people per event (a contamination in the distribution network with 104 Campylobacter per section, with an average volume of 4 m3). The basic scenario involves no measures; in blue, the effect of the one-sided feed of the section; and, in black, the effect of boil-water advice that 80% of the people follow.

The research showed that the risk meets the standard of a maximum of 1 infection per 10,000 people per annum. Current measures, such as one-side feeding of the drinking water network following the work activities, contribute to this low risk. It is still possible that one or more people will become infected due to work on the network. Preventive boil-water advice, taking earlier sampling following work activities, and lowering the detection limits by increasing sampling volume could possibly contribute to lowering risk. The practicality of these measures still needs to be studied.

The QMRA model can be used to determine – for a specific distribution network – the impact of measures on the infection risk, expressed as a percentage reduction in the infection risk. Application of the QMRA model to test infection risk against an absolute threshold value is not yet possible; there is still too much uncertainty, particularly with regard to the concentration of contaminations and the effect of flushing.

By improving the data quality concerning the work on the networks and collecting results uniformly, the risk assessment can be improved.