Every summer in the Netherlands and elsewhere in Europe, bathing is forbidden or advised against in outdoor bathing locations because of the excessive growth of cyanobacteria. The reason is that these blue-green algae are capable of producing toxins that are potentially hazardous to human and animal health.

In the Netherlands, water quality at bathing locations is checked for the presence of blue-green algae in accordance with the Blue-Green Algae Protocol (2012). In the first instance this involves a visual inspection. If the water is suspect, samples are taken for closer analysis and, if blue-green algae are detected, regular sampling and analysis are begun. Up to now, such analysis has been through microscopic observation: a relatively labour-intensive and specialised method. The Genomics project makes use of methods which use (micro)organism DNA for the identification and detection of the blue-green algae. A method that KWR has been developing over the past few years, and which could represent an advance in terms of speed, reproducibility and cost. Since 2009, qPCR methods have been developed for the most frequently occurring genera capable of producing toxins: Microcystis, Planktothrix, Anabaena and Aphanizomenon. The methods make use of the gene for phycocyanin (pigment), which is present in all blue-green algae, but varies between the different types.

This TKI project now aims at making the qPCR method available on a routine basis and usable for four dominant cyanobacteria genera that are presumed to have the greatest toxicity potential. A collaboration was entered into with Intertek Life Sciences (Geleen) for the project. This company has carried out bathing water monitoring for Rijkswaterstaat (RWS) for several years. But the Blue-Green Algae Protocol lists five genera that water managers in the Netherlands need to be alert to. The fifth genus is Woronichinia, which occurs primarily in urban waters and can be hazardous for house pets (particularly dogs). This Genomics project developed a qPCR test to detect the cells of this genus, since such a test was not previously available.

In 2013, Intertek’s lab successfully implemented the qPCR method. KWR played an important role in the choice of the hardware, lab set-up and protocols followed. Subsequently, Intertek applied the qPCR method to more than 300 samples taken from bathing locations like those administered by RWS. The results of all the samples taken in that season met the performance criteria, such as reporting efficiency and speed. The results of Intertek’s work were comparable to those of previous years. In 2013, the microscopic counts of blue-green algae and the qPCR results led to comparable assessments of the bathing water health risk in 95% of the cases (293 of the total of 306 samples).

The development of a method for Woronichinia was not simple. Cells of this genus are hard to cultivate under laboratory conditions and they are not available in public culture collections. The necessary information on the DNA was also unavailable. In 2013, KWR collected water samples from several urban water bodies (see below), selected about 90 Woronichinia colonies (see photo below), and analysed the DNA of the phycocyanins. This knowledge enabled the development of a qPCR technique for Woronichinia as well. The method developed is robust, no cross reactions occurred with other cyanobacteria genera. Moreover, using the primer/probe combination developed, Woronichinia cells were detected in water samples in which they had also been detected microscopically.

The project concluded in January 2014 with a successful meeting in which both series of results were presented. Intertek will now take further steps to make the method commercially marketable for a broader public. The qPCR method functions satisfactorily, but one last step is needed to render it comparable with methods like those used for the other four genera. This concerns the relationship between cell counts and DNA copy numbers. In the summer of 2014 cell material will again be collected which, following precise quantification, will be tested for the presence of DNA copies. The findings of this TKI project will be presented in an H2O article, like the one to appear in the April 2014 issue of the publication (Wullings, et al. in press). 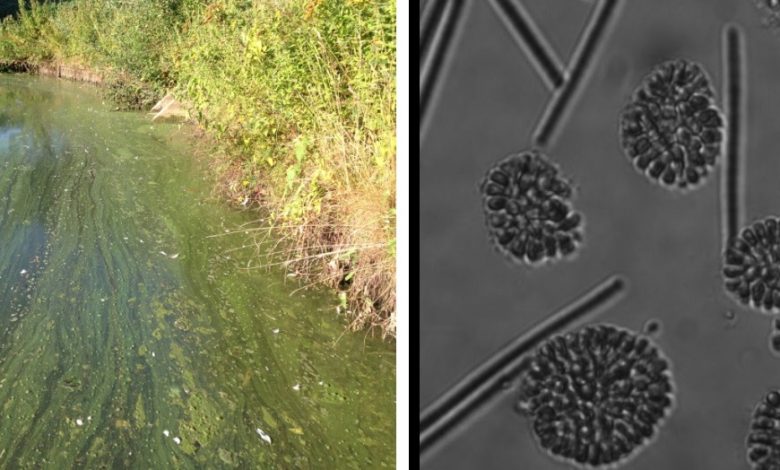 Besides the most frequently occurring potentially toxic blue-green algae – Microcystis, Planktothrix, Anabaena and Aphanizomenon – there is now also a qPCR method for the Woronichinia genus, which blooms frequently in urban waters and, occasionally, in bathing locations as well. The results of the field trials show that the blue-green algae DNA toolbox is ready for routine use in the monitoring of (potentially) toxic blue-green algae in bathing water. The method, including all standards and controls, is very robust and user-friendly. Intertek ha demonstrated that the methods can be implemented in a very short period of time in the laboratory. A field trial of 306 bathing water samples, in which both DNA methods and cell counts were conducted, showed that the results of the field samples resulted, in 95.5% of the cases, in a similar risk assessment.