As a result of climate change, low river discharge levels are occurring more frequently and for longer periods in the Meuse. This can structurally change the river’s water quality. For Dunea this means that in the future the need to switch over to the Lek will not be limited to emergency situations. When raw water is temporarily drawn from the Lek, it is only filtered, which means that an assessment has to be made of its impact on the water quality and the ecology of the infiltration areas. Attention has to be paid in particular to the risk of algal bloom caused by an increased phosphorus load, as well as to the possibly different levels of pesticides present in the Meuse and Lek waters. In this project we calculated the possible consequences, for the 2009-2013 period, of a 1-2 week intake of filtered Lek water into the Meijendel infiltration ponds. 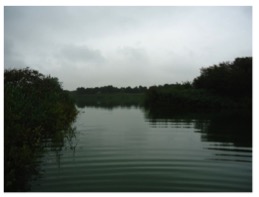 Dunea infiltration pond: How is the water quality in this water system affected by a possible addition of filtered Lek water, with its associated extra phosphorus load?

Estimate of phosphorus balance with temporary intake of Lek water

For one infiltration pond in Meijendel, we determined, over a period of a year, the average monthly evolution of the total phosphorus concentration, using data covering a number of years. We also estimated the extent to which a notional 1-2 week intake of filtered Lek water would, in an average year, result in an increase in orthophosphorus concentrations. The results were set against a concentration of 0.06 mg P/l, a level at which no large algal bloom risk would be expected. The meta model PCLake then produced a global estimate of the extent to which the calculated phosphorus load could cause a shift from clear to turbid water. We also studied the possible differences in the presence of various pesticides in the Damned-Up Meuse and the Lek canal (representative for the Lek) for 2009-2013; we had earlier made such a comparative study for the 2000-2010 period.

No increased probability of algal bloom between March and July

The research showed that the intake of Lek water into the Meijendel infiltration ponds, during one week only from March and July (inclusive), did not appear to increase the probability of undesirable algal bloom. An intake of two weeks can only take place in April, with an extension to the whole March-July period if supplementary flocculant filtration is used to limit the phosphorus load. As in the earlier research period (2000-2010), the current study of the pesticides showed no reason to exclude Lek water as a (temporary) back-up source for the Meijendel infiltration ponds.