KWR analyst Margo van der Kooi has won the 2019 Willem Koerselman Award. She received the award as the author of the most-cited scientific paper in 2019 – her paper was cited 32 times. The award was presented to Van der Kooi during a webinar on 14 May by Dragan Savic, KWR’s CEO. The award consists of a trophy, a certificate and a financial reward. 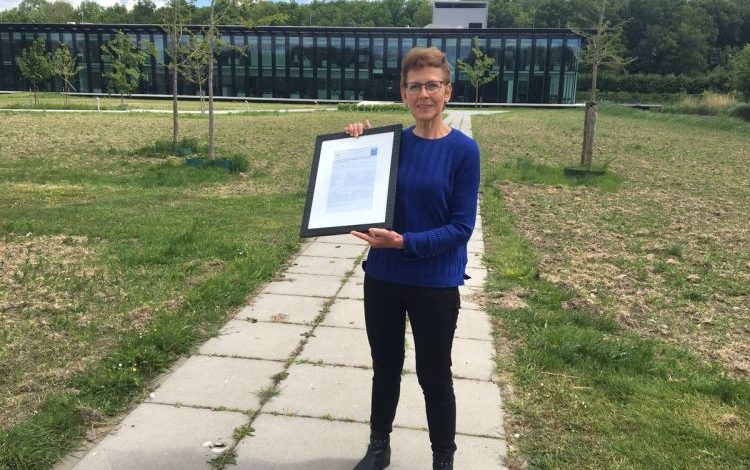 Van der Kooi received the 2019 Willem Koerselman Award as a co-author of the paper, Toxicological relevance of emerging contaminants for drinking water quality, published in Water Research in 2010. The paper describes research aimed at achieving an indicative drinking water standard for compounds that potentially present a risk to public health, and for which no guideline values currently exist. The paper also provides a list of compounds with components that deserve extra attention with regard to drinking water safety standards.

Among the areas Van der Kooi is active in are LC-MS and GC-MS analyses of water. This encompasses the analysis of drugs, pharmaceuticals, pesticides and other harmful compounds in drinking-, ground-, surface and wastewater. She has worked as an HLO analyst at KWR over thirty years. ‘I was really surprised to win this award with a paper published in 2010. I conducted part of the literature study. The colleagues with whom I wrote the paper no longer work at KWR. It gave me great pleasure to receive the award, a framed version of the paper’s abstract.’ During his presentation speech, Savic said that ‘the annual award presentation and our great number of publications testify to KWR’s standing as a knowledge institute of high scientific quality.’

The annual Willem Koerselman Award is attributed to the KWR researcher(s) whose peer-reviewed paper was most cited over the preceding year. The lucky winner cannot previously have won the award.

As is the case every year, Willem Koerselman, after whom the award is named, was also present, although only remotely this time during the webinar. In 1996, Koerselman together with Arthur Meuleman published the paper, ‘The vegetation N:P ratio: A new tool to detect the nature of nutrient limitation’ in the Journal of Applied Ecology, which today still heads the all-time list or most-cited KWR publications. Excellent grounds for setting up the award at the time.