New substances are being constantly produced and used, and also ending up in the groundwater and surface water used for the production of drinking water. This regularly raises questions about their potential negative impact on human health. In order to understand the risks presented by contaminants of emerging concern (CECs) in drinking water and its sources, KWR researchers Annemarie van Wezel, Kirsten Baken and Rosa Sjerps conducted a toxicological risk assessment. The resulting scientific paper they wrote, together with former KWR researcher Merijn Schriks of Vitens, has been published in the prestigious journal Environment International.

The researchers selected 163 drinking-water relevant CECs that occur in drinking water, groundwater and/or surface water. There was sufficient toxicological information available for 142 CECs, which allowed for the derivation of (provisional) guideline values for them in drinking water.

Whenever such information did not exist, a precautionary generic approach – the Threshold of Toxicological Concern (TTC) – was taken for an initial rough screening of the risk. The available TTC levels, derived for food and based on an older toxicological dataset, provide sufficient protection regarding the relevant substances in drinking water.

A great majority of the substances did not occur in concentrations that individually present a human health risk. This applies to the average and to the maximum concentrations measured in both drinking water and in the sources used; the safety margins are generally high. But for a very limited number of substances, a health risk could not be excluded a priori, so that the researchers recommend that these be subjected to supplementary monitoring. 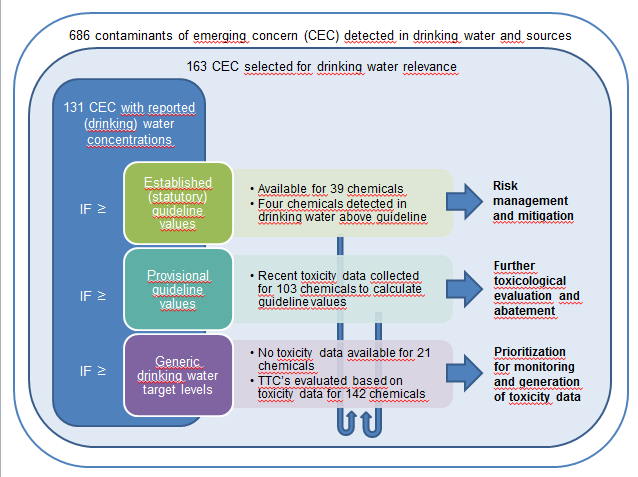 Procedure for health risk assessment of CECs in drinking water and sources.