Former KWR researcher Bernard Voortman has earned his doctorate from VU University Amsterdam for his thesis on ‘Evaporation from dry dune vegetation’. His research concerned invisible water loss. We know that, on average, two times as much water disappears invisibly through evaporation than it does visibly through river discharges into the sea. But little is known about the amount of loss that occurs in dry nature areas. This is unfortunate for the water sector, because all of the precipitation water that does not evaporate ultimately recharges the groundwater resources from which the water utilities abstract their water. A good reason for extensive research into evaporation in nature. 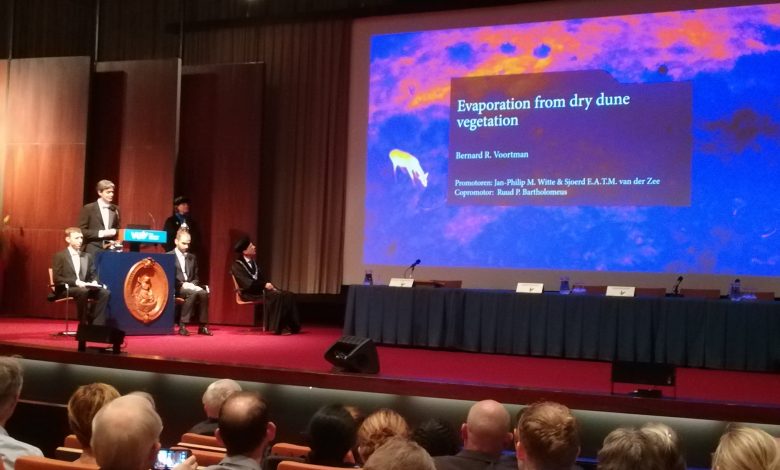 Voortman focused his research on the bare vegetations that grow on dry sandy soils, such as dunes and pushed moraines. It is precisely these areas that contain strategic groundwater supplies. His work shows that moss and lichen species evaporate less than, or as much as, bare sandy soils. This is remarkable, since scientists have generally assumed that more biomass means more evaporation. This outcome is also of great practical value: it means for instance that stimulating moss-rich European habitat type grey dunes is not only important for biodiversity, but also for groundwater recharge.

Voortman also measured evaporation in heathlands and dry grasslands. To do so, he set up two weather stations and developed an instrument to directly measure actual evaporation. He then, together the company Eijkelkamp and with the support of a TKI subsidy, further developed this ‘lysimeter’ into a model for the market – in the meantime several of them have been sold. Employing a smart technique, he spatially scaled up his measurements to a surface area that bridges with satellite imagery. Lastly, Voortman studied how the evaporation properties of the vegetation adjust to a changing climate.

Thanks to Voortman’s research insights, the evaporation in nature areas can now be better quantified. Hydrological models can therefore be improved and vegetation management modified with a view to increasing groundwater supplies. This will benefit the water provision for agriculture and nature and, ultimately, for drinking water as well.