The Laboratory for Materials Research and Chemical Analysis is equipped with specialised instruments, the most important of which are described in this page.

Mass spectrometry is used for the identification and quantification of molecules, even in very low concentrations. Mass spectrometry is a detection technique in which ions are separated on the basis of the mass-to-charge (m/z) ratio. The output of a mass spectrometer is a mass spectrum showing the number of ions per m/z value. High-resolution mass spectrometry (HRMS) is a technique that provides high precision (± 0.001 Dalton) and high mass resolution (m/Δm ≥ 20,000), which makes it very suitable for non-target screening of (unknown) polluting compounds. HRMS is capable of detecting thousands of compounds in a single sample in a short period of time, and its high precision enables the formula determination. Our chemical laboratory is equipped with different (high-resolution) mass spectrometers which, coupled with gas- and liquid chromatography, are used for the analysis of a wide variety of samples and compounds. Examples include our Orbitrap Fusion Tribrid, Triple Quad 6500+, QTOF 5600+ and TripleTOF 5600+ mass spectrometer. 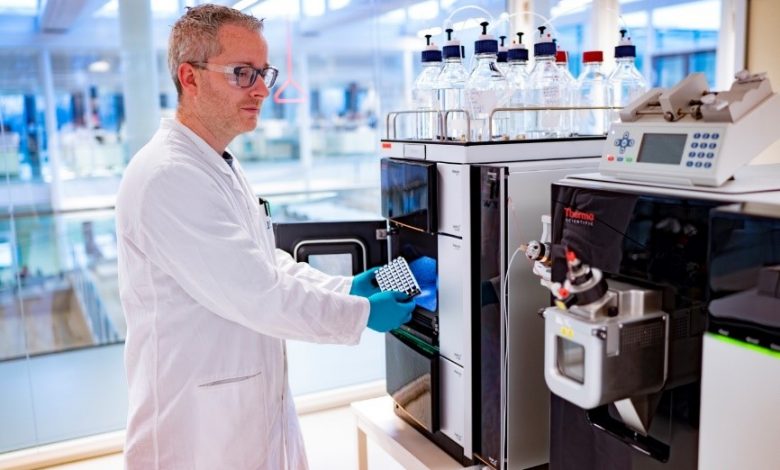 Thermogravimetric analysis (TGA) is an analytical method in which the mass-loss of a sample is monitored as it is heated in the absence of oxygen. The mass decreases because organic compounds decompose into smaller molecules. These molecules and compounds are then detected with a gas chromatograph (GC) coupled with a mass spectrometer (MS). The identity of the compounds decomposed in the TGA is derived from the information produced by the GC/MS. These decomposition products characterise the material from which they originate. We use TGA-GC/MS, among others, to analyse and classify microplastics and to determine the amount of water or organic matter in samples.

Laser Direct InfraRed (LDIR) imaging makes use of a quantum cascade laser which records the infrared spectra of surfaces and particles (10 – 500 µm). It enables the analysis of particles in complex mixtures. With LDIR, the particles are counted, identified, measured, and their shape is appraised. This makes the technique particularly suitable for the analysis of microplastics in the environment. With LDIR we are therefore able to distinguish different polymers such as PE, PP and PVC from each other. 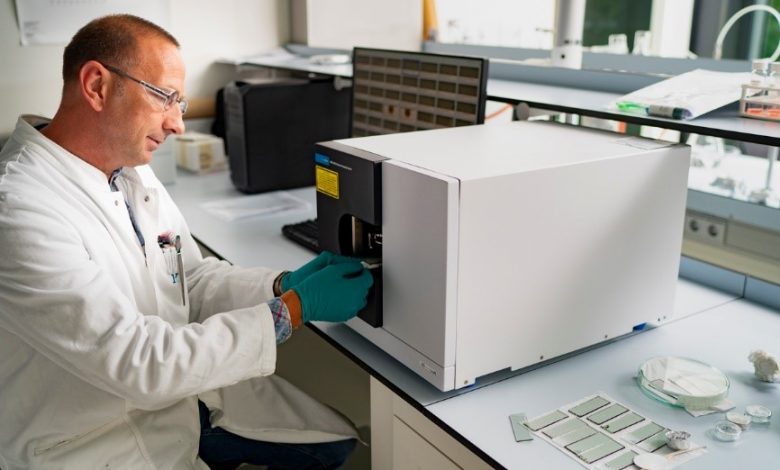 Field-flow fractionation (FFF) is a separation technique based on the different diffusion coefficients of particles. In asymmetrical flow field-flow fractionation (AF4) a cross-flow is created to separate particles on the basis of size. AF4 can be coupled with different detectors, such as UV detectors or mass spectrometers, and is mostly used for the separation of proteins, nanoparticles, nanoplastics (5 to 100 nm) and fullerene aggregates in aqueous matrices. 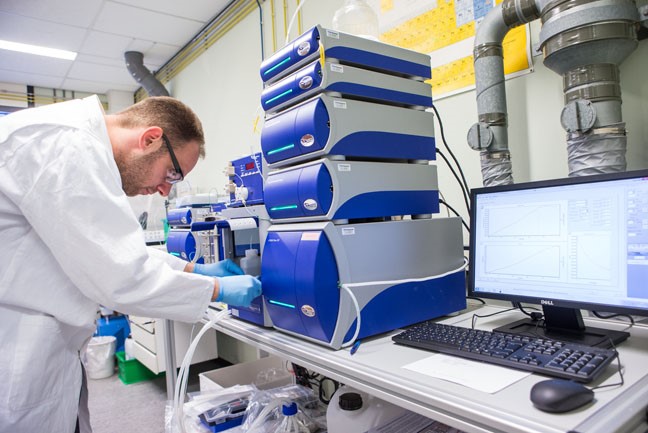 High-performance liquid chromatography coupled with a UV detector is used to separate compounds from each other and to measure UV spectra. UV spectra can be used for the identification of organic pollutants that absorb UV light. This commonly used technique is simple and relatively inexpensive, and, together with the KWR-developed UV2NIST software, provides an efficient means of monitoring organic micropollutants in different water types.